'Dude Food' is Patriotic? This Historian Doesn't Think So

The celebration of generous portions, meat and fat as masculine and patriotic would have been alien to George Washington and Thomas Jefferson, who advocated vegetables and moderation as American ideals. This article by Maurizio Valsania is republished here with permission from The Conversation. This content is shared here because the topic may interest Snopes readers; it does not, however, represent the work of Snopes fact-checkers or editors.

Dude food is on a roll in America. Gargantuan pizzas, footlong subs, high-stacked burgers and extra-loaded nachos remain a basic choice for any real or pretend He-Man.

Eating dude food conjures not just manliness, however. There’s patriotism, too. TV networks keep churning out shows that celebrate the quasi-magical equation between generous portions, masculinity and devotion to country.

Guy Fieri, the multimillionaire guru of dudeism, has a clear-cut philosophy. His barbecues and other cooking performances are a means to celebrate American patriotism, counteracting what he describes as a lot of “infighting and democratic craziness that goes on” in the U.S.

Dude food, Fieri says, would remind Americans about “what a great country we are and how lucky we are to be the greatest country in the world.”

But as an author of a new book on George Washington, notoriously the first among men, I can assure you that there was a time when dude food was not celebrated as either masculine or patriotic.

At that moment in American history, devouring heaping helpings wasn’t considered manly by the country’s leaders. It was seen as grotesque, perhaps even a vestige of aristocratic British habits: “I fancy it must be the quantity of animal food eaten by the English,” Thomas Jefferson wrote in 1785, “which renders their character insusceptible of civilisation.” 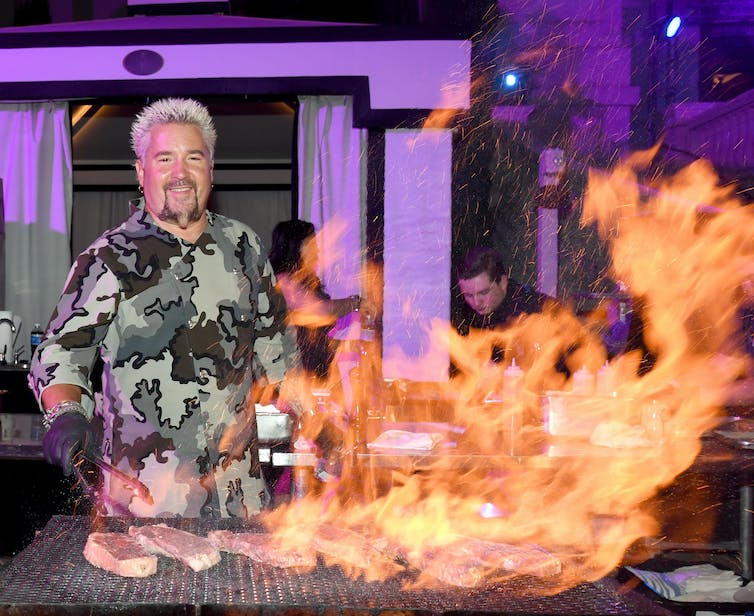 After gaining independence, one of the founders’ main concerns was to make the new “experiment,” as they called the nation, as little “corrupt” and as little British as possible.

It was in the kitchen, Jefferson joked, that a “reformation must be worked.” He wasn’t entirely joking. Educating Americans to eschew gluttony, to cut down on red meat and to model their manliness upon ideals of moderation, self-control and other republican virtues was serious stuff to Jefferson and his fellow founders.

Self-styled manly men, today as well as a couple of centuries ago, eat a lot. And, as author Carol J. Adams writes in “The Sexual Politics of Meat,” they do not eat vegetables, berries or ingredients that can be easily cultivated or foraged.

But eating roast beef as King Henry VIII did wasn’t a habit American leaders sought to imitate, or in any way encourage. We are what we eat, an old adage says, and in the eyes of the founders, those who indulged in humongous servings or blood-soaked chunks of flesh couldn’t become a good model for the nation.

John Adams, the second president, found it “humiliating,” “degrading” and “mortifying” that Americans should excel in intemperance, regarding food or when it comes to their drinking habits.

“Is it not humiliating that Mahometans and Hindoes,” Adams asked, “should put to shame the whole Christian world by their superior examples of Temperance? is it not degrading to Englishmen and Americans that they are so infinitely exceeded by the French in this cardinal virtue and is it not mortifying beyond all expression that we Americans should exceed all other and millions of people in the world in this degrading beastly vice of Intemperance?”

Washington, for one, stood up as an example of temperance. He largely adhered to “a vegitable and milk diet,” eating only small amounts of red meat. Washington’s alimentary philosophy was to avoid “as much as possible animal food.”

Medical doctors, similarly, frowned upon the consumption of meat. In November 1757, for example, Washington was bedridden with dysentery. As the doctor arrived, he pronounced his therapy. “He forbids the use of meats,” Washington wrote in one letter. 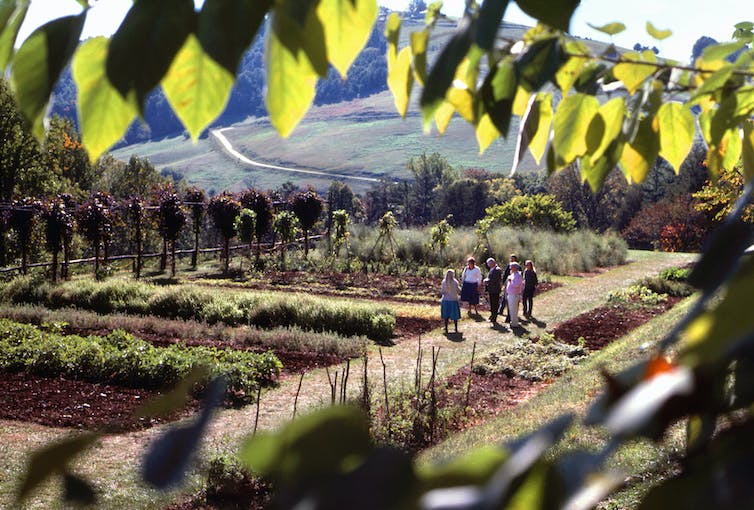 Thomas Jefferson believed in a diet dominated by vegetables, more than 300 varieties of which were grown in his garden at Monticello, shown here in 1987. Robert Alexander/Getty Images

As a whole, Washington never turned his meals into occasions during which he would promote his masculinity. He always aimed for moderation – even if, by today’s standards, he does not appear ascetic.

Washington was fond of fish. On Saturdays, especially during his time as president, he usually had what was called a “salt fish dinner,” a potpourri of boiled beets, potatoes and onion mixed with boiled fish, fried pork scraps and egg sauce.

His soldiers as well had to learn the habit of temperance – and to learn it the hard way.

“The health of the army,” one of Washington’s orders goes, “cannot be preserved without a due portion of vegetable diet. This must be procured whatever may be the expense.”

Washington’s officers were expected not only to supervise the “cleanliness of the camp” but above all “to inspect the food of the men, both as to the quality and the manner of dressing it.” It was crucial to push soldiers “to accustom themselves more to boiled meats and soups and less to broiled and roasted, which, as a constant diet, is destructive to their health.”

It wasn’t only “destructive to their health”; it was a bad example for the nation. Many people could see the famous general and later the president eating moderately. Washington thus established a clear-cut difference between himself, a civilized and modern man, humble and calm, and those hapless creatures who were trapped at an inferior stage of civilization. 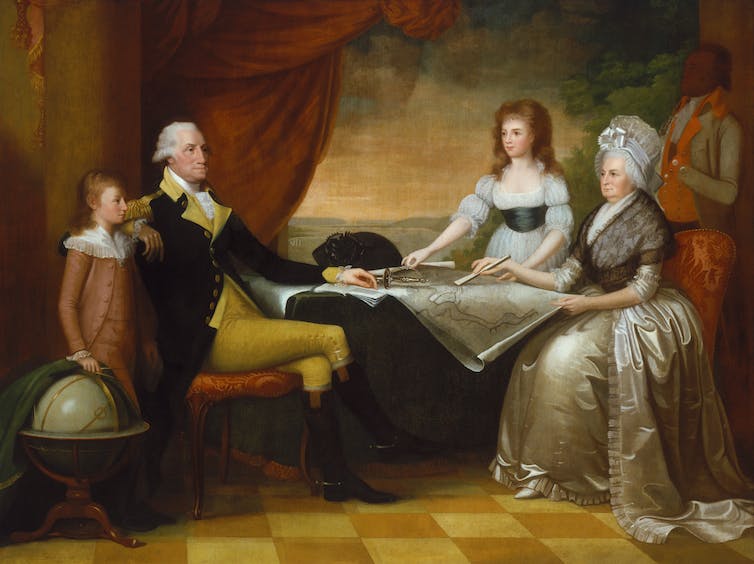 The founders’ culinary preferences were a political act. They were inviting men to repudiate one of their allegedly essential masculine privileges, the craving to sate their vast appetites.

“I have lived temperately,” old Jefferson explained to Dr. Vine Utley, “eating little animal food, and that not as an aliment, so much as a condiment for the vegetables, which constitute my principal diet.”

Adams, Washington and Jefferson didn’t fear that by abstaining from dude food they would have been seen as weak. They didn’t dread exclusion from male company. For them, moderation and self-control were more important manly assets.

Moderation and self-control, the founders believed, would give Americans a clearer mind to think about the future of their nation.

Maurizio Valsania is a Professor of American History at Università di Torino.