Expert: Holocaust Comparisons in US Politics Reflect a Shallow Understanding of History

Many Americans know a simple version of Holocaust history, in which their country played the savior. The reality isn’t so comfortable, this historian writes. This article by Adam R. Seipp is republished here with permission from The Conversation. This content is shared here because the topic may interest Snopes readers; it does not, however, represent the work of Snopes fact-checkers or editors.

Robert Keith Packer, a 57-year-old Virginian, achieved a measure of infamy at the Jan. 6 Capitol riot when he was photographed wearing a sweatshirt emblazoned with a skull and crossbones along with the words “Camp Auschwitz.” “Work Brings Freedom,” the front said, a translation of the notorious motto “Arbeit macht frei” that appeared on the gates of Auschwitz and several other Nazi concentration camps. On the back was the word “Staff.”

Packer was sentenced to 75 days in prison on Sept. 16, 2022, for his role in the riot – he was tried for his actions, not his clothing. But his sweatshirt was far from the only Holocaust reference on Jan. 6 or in its aftermath.

Rioters have compared their arrests to the persecution of Jews, and commentator Candace Owens compared Jan. 6 to the Reichstag fire, which Adolf Hitler used as pretext to consolidate power in 1933.

It is a reminder of something that is all too apparent to scholars of the Holocaust, like myself: Americans are willing to trivialize the genocide by turning it into a tool for their own political goals.

As a historian who has written about the American role in liberating concentration camps at the end of World War II, I have spent a great deal of time thinking about how Americans have – and have not – talked about the Holocaust in the decades since. There is little evidence that outright denial of the Holocaust is widespread. Instead, the problem is a poor understanding of the tragedy, including this country’s response – the focus of a remarkable documentary series, “The U.S. and the Holocaust,” which recently premiered on PBS.

The contemporary American story of the Holocaust focuses on the U.S. role in helping to bring the Nazi regime of terror to an end. A more nuanced understanding of America’s reaction is less comforting. 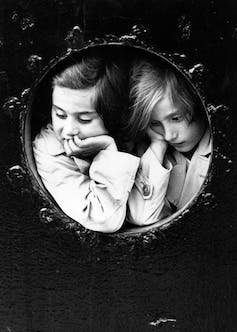 Two German-Jewish refugees on the MS St. Louis arrive in Antwerp, Belgium, after the ship was refused entry to Cuba and Miami. Gerry Cranham/Hulton Archive via Getty Images

The PBS series, produced by acclaimed filmmakers Ken Burns, Lynn Novick and Sarah Botstein, traces what Americans knew about the vast and murderous campaign against civilians in Nazi-occupied Europe in the 1930s, as a flood of Jewish refugees attempted to flee Hitler’s Germany.

The U.S. did not enter the war to stop Nazi persecution of Europe’s Jews. In fact, a majority of Americans opposed entering the war at all until 1940, a year before the Pearl Harbor attack brought the U.S. into the conflict.

Many Americans had no interest in protecting the rights of religious or ethnic minorities at home or abroad. Antisemitism and anti-foreign prejudice was a core element of American society in the early 20th century, just as white supremacy was. These forms of hatred and exclusion drew from the same well of supposedly “scientific” beliefs about racial hierarchy.

While the U.S. allowed almost 125,000 Jewish refugees to enter the country during the years between Hitler’s rise to power and the start of the war, many more were denied entry or left in limbo.

This part of the country’s response has been largely forgotten, in favor of a story where the U.S. plays a more heroic part.

The liberation of the concentration camps in the spring of 1945 plays a central role in public memories of the war today, along with the Allied landings in Normandy on “D-Day” in 1944. The hall through which millions of visitors have entered the U.S. Holocaust Memorial Museum in Washington is lined with flags of the “liberator divisions” of the U.S. Army.

There is no question that the arrival of American forces at Buchenwald, Dachau and other camps across western and southern Germany saved thousands of prisoners facing murder or death by starvation and sickness. In reality, however, the systematic murder of Europe’s Jews had largely concluded, and primarily took place hundreds of miles to the east in what is today Poland, Ukraine, Russia and the Baltic states. By the time American forces landed in western Europe, Europe’s Jewish population had already been reduced to a few small pockets.

Within weeks of the arrival of American troops at Buchenwald, Americans saw images and newsreel film of the horrors of the camps. However, it took decades for the story of camp liberation to become the most important act of the war in Europe in Americans’ minds. It would not be until the 1980s, when the liberators and survivors were entering old age, that the Holocaust was firmly entrenched in American school curricula and popular culture.

One important consequence of this long wait was that the stories told by and about liberators changed in the intervening decades. As Americans became more familiar with the events of the Holocaust through television and films, liberator stories began to grow more similar to each other and merged into a general story of the Holocaust, which increasingly focused on the horrors of the death camps in German-occupied Poland. Liberators of Buchenwald describing the event decades afterward, for example, thought they remembered gas chambers at the camp, when in fact there were none at that location. 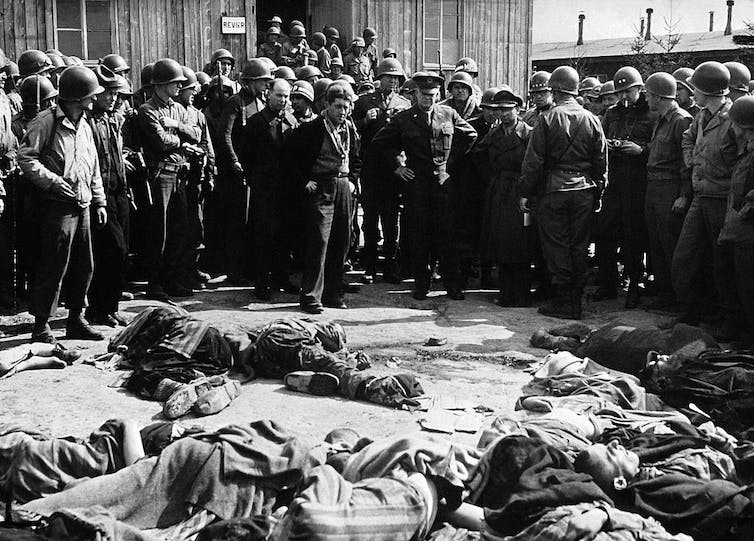 General Dwight D. Eisenhower and soldiers discover 70 prisoner bodies at the Ohrdruf concentration camp, near Buchenwald, who had been executed by the fleeing Nazis. Keystone-France/Gamma-Keystone via Getty Images

Auschwitz-Birkenau in Poland – the most infamous camp facility, with its gates saying “Arbeit macht frei” – came to represent all concentration camps in American memory, and even in family stories. In 2008, for example, then-presidential candidate Barack Obama told a crowd about his great-uncle’s participation in the liberation of Auschwitz. Auschwitz was actually liberated by the Soviet army in January 1945. Obama’s campaign later clarified that his great-uncle, Charles Payne, participated in the liberation of Ohrdruf, a subcamp of Buchenwald.

Talking About the Holocaust Today

The centrality of camp liberation to the American story of the Holocaust has real consequences. It turns the Holocaust into a story of American triumph over evil and overlooks the country’s refusal to do more to save the victims.

This simplistic version of a complex history has allowed many Americans to use “the Holocaust” and “Nazism” as shallow symbols for any kind of government action they oppose and deem oppressive, particularly public health measures during the COVID-19 pandemic. Opponents have compared infectious disease specialist Dr. Anthony Fauci to SS physician and torturer Dr. Josef Mengele. Representative Marjorie Greene has compared face mask rules to forcing Jews to wear Star of David badges, and Capitol police agencies to the Nazi-era Gestapo.

As Burns’ documentary emphasizes, the U.S. is once again in a time of national reckoning about race, discrimination and histories of oppression. In the final minutes of “The U.S. and the Holocaust,” viewers see marchers in Charlottsville, Virginia, chanting “Jews will not replace us,” television pundits opining about the threat of cultural decline through immigration, the 2018 attack on the Tree of Life congregation in Pittsburgh, and the Jan. 6 riot. There in the crowd, wearing his sweatshirt, is Robert Keith Packer.

Adam R. Seipp is a Professor of History at Texas A&M University.