Queen Elizabeth II: the End of the ‘New Elizabethan Age’

She ruled over perhaps the most rapid technological expansion and sociopolitical change of any monarch in recent history. 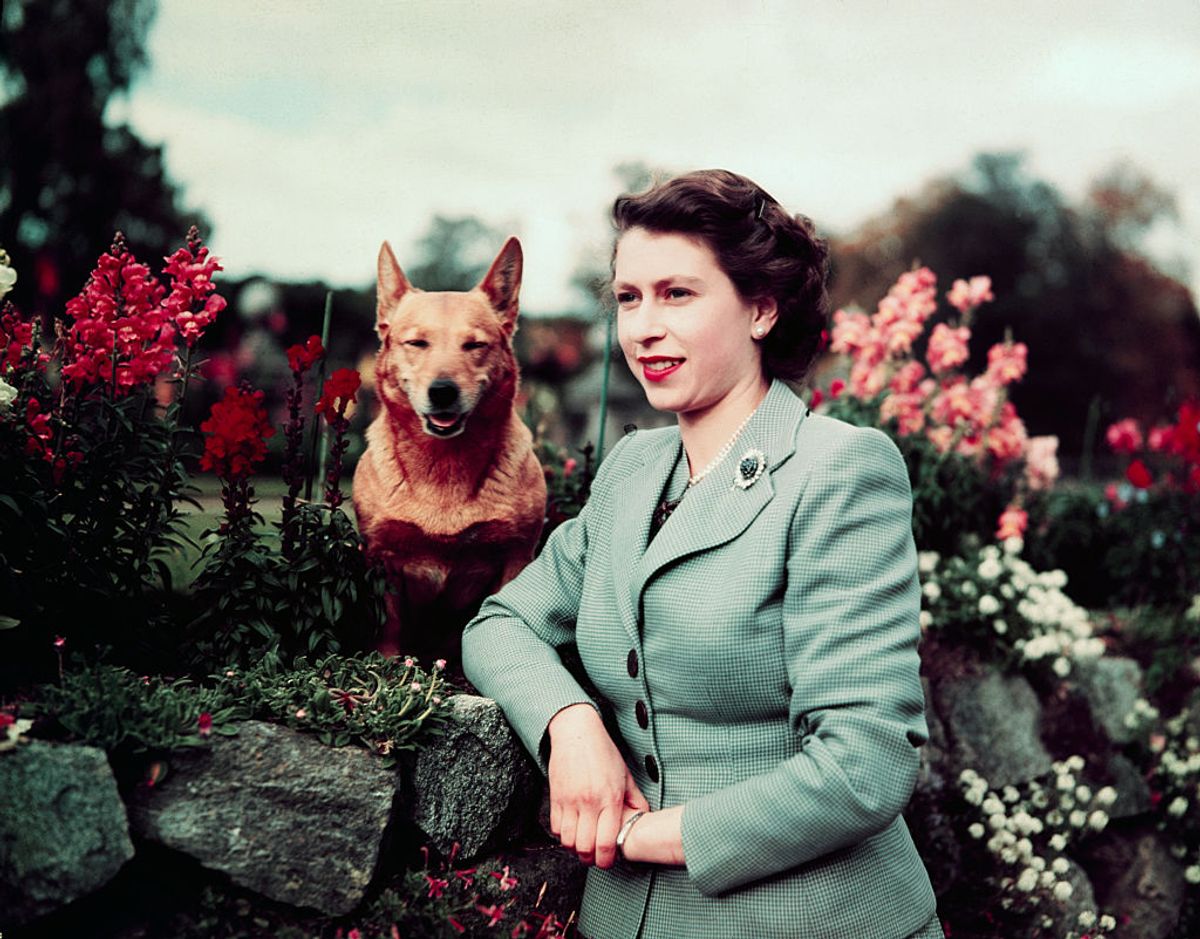 Queen Elizabeth II of England at Balmoral Castle with one of her Corgis, 28th September 1952. UPI color slide. (Image Via Getty Images)

This article by Laura Clancy is republished here with permission from The Conversation UK. This content is shared here because the topic may interest Snopes readers; it does not, however, represent the work of Snopes fact-checkers or editors.

When Queen Elizabeth II came to the throne in 1952, Britain was just seven years out of the second world war. Rebuilding work was still ongoing, and rationing key products such as sugar, eggs, cheese and meat would continue for another year or so.

But the austerity and restraint of the 1940s was giving way to a more prosperous 1950s. It is perhaps no wonder, then, that the Queen’s succession was hailed as the “new Elizabethan age”. Society was changing, and here was a young, beautiful queen to sit at its helm.

Seventy years later, Britain looks very different. Elizabeth II ruled over perhaps the most rapid technological expansion and sociopolitical change of any monarch in recent history. Looking back on Elizabeth II’s life raises key questions about not just how the monarchy has changed, but also how Britain itself has transformed throughout the twentieth and twenty-first century.

If Elizabeth I’s reign was a period of colonial expansion, conquest and domination, then the “new Elizabethan age” was marked by decolonisation and the loss of Empire.

When Elizabeth II succeeded the throne, the last vestiges of the British Empire were still intact. India had been granted independence in 1947, and other countries soon followed throughout the 1950s and 1960s. Although it existed from 1926, the current Commonwealth was constituted in the London Declaration 1949, making member states “free and equal”. The Commonwealth has a veneer of colonial power given that it shares a history with Empire, and continues to invest the British monarch with symbolic power.

The colonial history of the Commonwealth is reproduced in the values of Brexit, and related nationalist projects which suffer from what Paul Gilroy calls “postcolonial melancholia”. The Queen was the living embodiment of British stoicism, “the Blitz spirit”, and global imperial power, on which so much of the Brexit rhetoric hung. What will the loss of Britain’s longest-reigning monarch do to the nostalgia that contemporary right-wing politics draws upon?

The Media and the Monarchy

At the coronation, the British prime minister, Winston Churchill, allegedly responded to proposals to broadcast the ceremony on live television that “modern mechanical arrangements” would damage the coronation’s magic, and “religious and spiritual aspects should [not] be presented as if it were a theatrical performance”.

Television was a new technology at the time, and it was feared that televising the ceremony would be too intimate. Despite these concerns, televising the coronation was a big success. The research project “Media and Memory in Wales” found that the coronation played a formative role in people’s first memories of television. Even non-ardent monarchists could give an intimate account of their experiences.

The royal image has always been mediated, from the monarch’s profile on coins, to portraiture. For Elizabeth II this involved radical development: from the emergence of television, through tabloid newspapers and paparazzi, to social media and citizen journalism (processes related to democratisation and participation). Because of this, we now have more access to monarchy than ever before.

In my book, Running The Family Firm: How the monarchy manages its image and our money, I argue that the British monarchy relies upon a careful balance of visibility and invisibility to reproduce its power. The royal family can be visible in spectacular (state ceremonies) or familial (royal weddings, royal babies) forms. But the inner workings of the institution must remain secret.

The monarchy’s striving for this balance can be seen throughout the Queen’s reign. One example is the 1969 BBC-ITV documentary Royal Family. Royal Family used new techniques of “cinema verite” to follow the monarchy for one year – what we would now recognise as “fly-on-the-wall” reality television.

It gave us intimate glimpses of domestic scenes, such as family barbecues, and the Queen taking infant Prince Edward to a sweet shop. Despite its popularity, many were concerned that the voyeuristic style fractured the mystique of monarchy too far. Indeed, Buckingham Palace redacted the 90-minute documentary so it is not available for public viewing, and 43-hours of footage remained unused.

“Royal confessionals”, modelled on celebrity culture and notions of intimacy and disclosure, have haunted the monarchy over the past few decades. Diana’s Panorama interview in 1995 was iconic, where she told interviewer Martin Bashir about royal adultery, palace plots against her, and her deteriorating mental and physical health.

More recently, Prince Harry and Meghan Markle’s interview with Oprah Winfrey discussed what they described as “the Firm’s” racism, lack of accountability, and its dismissal of Markle’s mental health. These interviews really did expose the inner-workings of institution, and ruptured the visibility/invisibility balance.

Like the rest of the world, the monarchy now has an account on most major UK social media platforms. The Duke and Duchess of Cambridge Instagram account, run on behalf of Prince William, Kate Middleton and their children, is perhaps the most obvious example of royal familialism in the contemporary age.

The photographs appear natural, impromptu and informal, and the Instagram is framed as the Cambridge “family photo album”, allowing “intimate” glimpses into Cambridge family life. Yet, as with every royal representation, these photographs are precisely staged.

Social media has given the monarchy access to new audiences: a younger generation who are more likely to scroll royal photographs on phone apps than read newspapers. How will this generation respond to the death of the monarch?

The Queen succeeded to the throne during a period of radical political transformation. The Labour Party’s Clement Atlee had won office in 1945 in a sensational, landslide election which seemed to signal voters desire for change. The establishment of the NHS in 1948 as a central policy of the postwar welfare state, promised support from cradle to grave.

Winston Churchill’s Conservative party retook parliament in 1952. Churchill spoke to a different version of Britain: more traditional, imperialist, and staunchly monarchist. Such contrasting ideologies were visible in responses to the Queen’s coronation in June 1953.

David Low’s satirical protest cartoon “The Morning After”, published in the Manchester Guardian on June 3 1953, depicted party litter (bunting, champagne bottles) and the text “£100,000,000 spree” scrawled across the floor. The cartoon promptly instigated 600 letters of criticism for being in “bad taste”, and drew attention to contrasting political ideologies.

By the time of Tony Blair’s “Cool Britannia” years at the turn of the new millennium, the Queen was an older woman. Princess Diana was famously the “people’s princess” of the age, as her new brand of intimacy and “authenticity” threatened to expose an “out of touch” monarchy.

By 2000, three years after Diana’s death in a car accident in Paris, support for monarchy was at its lowest point. The Queen was believed to have acted inappropriately, failing to respond to public grief and “represent her people”. The Express, for example, published the headline “Show us you care: mourners call for the Queen to lead our grief”.

Eventually, she gave a televised speech which mitigated her silence by emphasising her role as grandmother, busy “helping” William and Harry address their grief. We’ve seen this grandmotherly role elsewhere too: in her 90th birthday photographs in 2016, taken by Annie Leibowitz, she sat in a domestic setting surrounded by her youngest grandchildren and great-grandchildren.

This is the image of the Queen that many will remember: an older woman, dressed pristinely, clutching her iconic, familiar handbag. While she was head of state throughout many of the seismic political, social and cultural changes of the 20th and 21st centuries, the fact that she rarely gave a political opinion means she successfully navigated the monarch’s constitutional political neutrality.

She also ensured that she remained an icon. She was never really given a “personality” like other royals, who have initiated a love-hate relationship with the public because we know more about them.

The Queen remained an image: indeed, she is the most represented person in British history. For seven decades British people have not been able to make a cash purchase without encountering her face. Such quotidian banality demonstrates monarchy’s – and the Queen’s – interweaving into Britain’s fabric.

The Queen’s death is bound to prompt Britain’s reflection on its past, its present and its future. Time will tell what the reign of Charles III will look like, but one thing is for sure: the “new Elizabethan age” is long gone. Britain is now recovering from recent ruptures in its status quo, from Brexit, to the COVID-19 pandemic, to ongoing calls for Scottish independence.

Charles III inherits a very different country than that of his mother. What purpose, if any, will the next monarchy have for Britain’s future?

Laura Clancy, is a Lecturer in Media at Lancaster University. This article is republished from The Conversation under a Creative Commons license. Read the original article.