Here's What We Know About That Painting of Trump Crucified

The painting has sparked debate since it first appeared online in 2020. 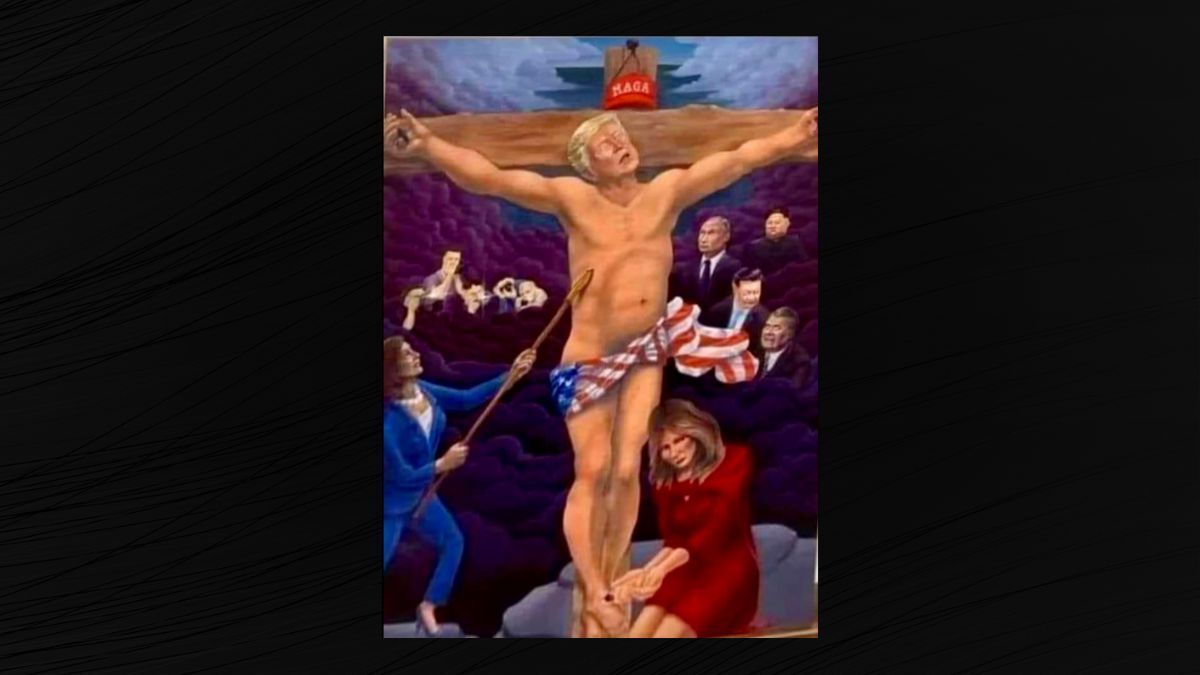 Since late 2020, a rather curious and controversial image has been floating around the internet. It's an image of a painting that shows former U.S. President Donald Trump crucified like Jesus, with an American flag serving as the loin cloth worn by Jesus in most artistic depictions of the crucifixion.

Over Trump's head hangs the iconic red MAGA hat, in place of the inscription the Bible says Jesus had on his cross that said (translated from Latin to English) "Jesus of Nazareth, King of the Jews."

The piece has other political references, including world leaders in the background, U.S. Speaker of the House Nancy Pelosi piercing Trump's side with a spear much like a Roman solider in the Bible pierced Jesus' side. Trump's wife, Melania, sits at his feet.

The internet being what it is, images of the painting went viral without any context, sparking fury and scorn. Some viewers commented on social media posts containing images of the painting, and said it was blasphemous. Others interpreted it as a sincere representation of the fervor with which Trump's base revered him.

Here, we'll try to answer questions about the item that may come up in viewers' minds, including:

Is This a Real Painting?

We have no reason to doubt that it's real, although we haven't seen it in person. But we did contact the person who originally posted pictures of it online. That person, Tristan Orvis, took a swing at selling the original in 2020, although in the end it never found a buyer.

It's a 2 foot-by-4-foot oil on canvas, entitled, "An Emotional Mirror," by an anonymous artist who goes by the pseudonym "Blando Simpleton," according to Orvis. The artist completed the painting in October or November of 2020 — around the tumultuous presidential election that saw Trump ousted from office. Trump then launched a disinformation campaign based on unfounded allegations of widespread voter fraud, in an unprecedented attempt to remain in power.

There were a couple offers to buy the painting, including one offer of $3,000 from someone who wanted to purchase it as a gag gift, Orvis told Snopes in an email. But in the end, the painting never sold, is currently facing a wall, and "gathering dust in an undisclosed location."

Is It a Parody?

It was intended to be satirical, according to a statement made by the artist, forwarded by Orvis:

The painting is a satirical look at the idolatrous bent American democracy has taken in recent years. It is called “An Emotional Mirror” because the intent of that painting is to highlight and call into question within the viewer such notions as belief in religion and politics (and how narrow the separating bridge between the two is), nationalism, media hype, and even the concept of the very definition of art itself. It was inspired by a conversation surrounding the president’s impeachment when a Democrat called for investigations targeting Trump, and a Republican called for investigations targeting Biden, but neither one wanted investigations targeting the representative of their own party. They were so devout toward their party, it was as though they were arguing dogmatic religious doctrine rather than an honest debate around political ideas.

The painting is "loosely based on" a piece by Italian Baroque-period painter Guido Reni, so aside from satirical, the artist considers the piece "quasi-Baroque" and surreal.

Was the Painting Really 'Found in a Thrift Shop'?

Orvis said that's not possible, because, "It has never left the studio. Not even for a field trip." And in comments on the "what in hell" post pictured above, Bill McGuire said he did not see it in person, and only saw it online. (We attempted to reach McGuire for comment and will update the story if we receive a response.)

Confusion over the origins of the piece may be due to the fact that there's very little on the official record about it.

The painting was the subject of a short-lived story published by the Jacksonville Daily News, based in Jacksonville, North Carolina, headlined, "Jacksonville artist's Trump Messiah painting misunderstood by the masses."

But the paper decided to spike the story after it was live for only about an hour because the artist refused to give reporter Trevor Dunnell his real name, according to Dunnell, who is now an editor for the New Bern Sun Journal.

"The story was about the broker and artist explaining the painting was misunderstood after receiving backlash from both liberals and conservatives about the painting being an abomination," Dunnell told Snopes in an email. "The artist was inspired to create the painting after former President Donald Trump's impeachment trial."

Orvis said the artist wants to remain anonymous out of fear that going public as the creator could jeopardize the person's livelihood.

Orvis said he has been the target of backlash from both sides of the political aisle as the result of posting the painting online.

"While art is subjective, I think that what makes 'good' art good is its ability to invoke emotion," Orvis stated. "If that is the metric to measure the value of art, then this piece is something special, albeit preposterous. Its echoes continue to reach me and random intervals years later."