Here's Why AOC, Omar Were Arrested — But Not Handcuffed — at Abortion-Rights Protest

Some social media users noticed lawmakers such U.S. Reps. Alexandria Ocasio-Cortez and Ilhan Omar positioned their hands behind their backs despite not being handcuffed. 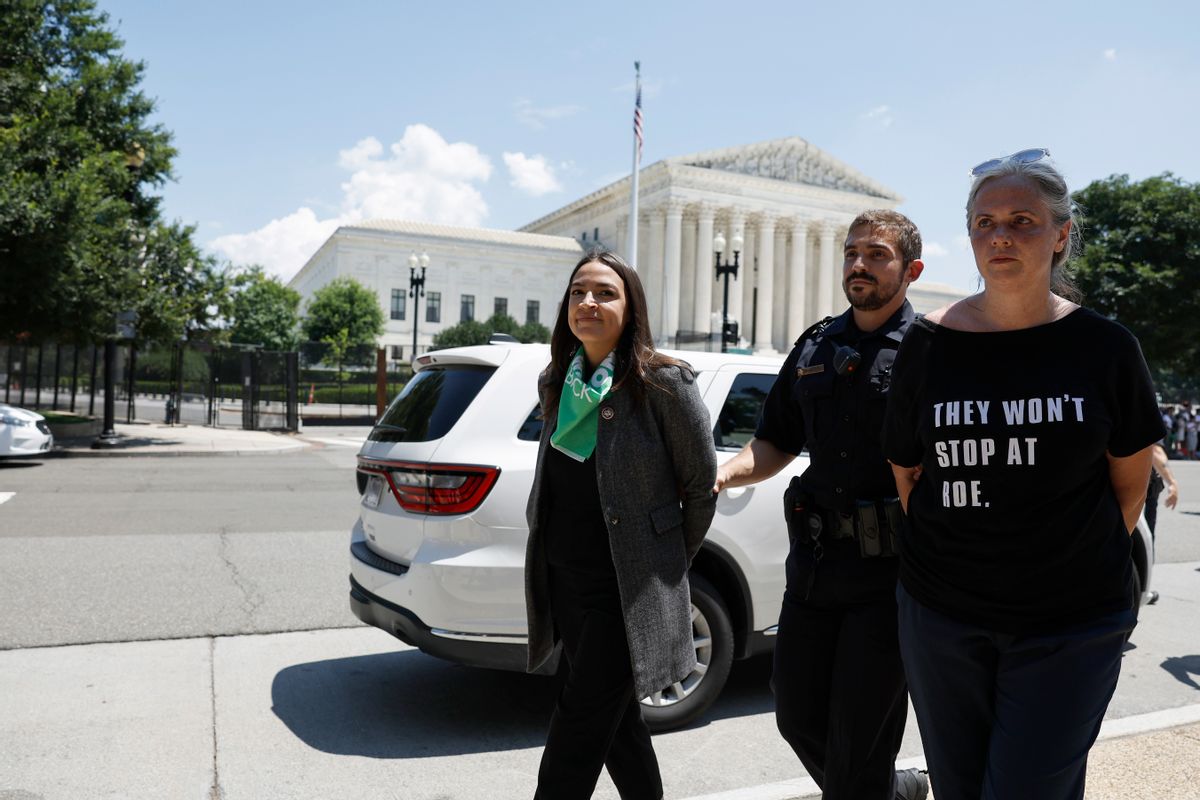 On July 19, 2022, U.S. Capitol police arrested 35 people, including 17 members of Congress, for allegedly "crowding, obstructing or incommoding" a public roadway during an abortion-rights protest near the Supreme Court.

As videos and photographs of these arrests went viral on social media, many people noticed that some Democratic lawmakers, such as U.S. Reps. Alexandria Ocasio-Cortez, D-N.Y., and Ilhan Omar, D-Minn., had their hands behind their backs despite not being handcuffed. This visual evidence led some people to speculate that these arrests had been "staged" or "faked."

That conspiratorial claim was predicated on the fact that, no, Capitol Police did not handcuff Omar and Ocasio-Cortez (or any other lawmakers) while arresting them. However, not all arrests involve such restraints (we explain more on that below), and the fact that members of Congress were not handcuffed during the July 2022 demonstration was not suspicious or unusual.

Capitol Police truly arrested 17 members of the House of Representatives for allegedly violating DC Code § 22–1307, which prohibits people from blocking public roadways. This is a misdemeanor offense that carries a maximum of a $500 fine or 90 days in prison.

According to the Missouri Independent, Capitol Police issued $50 citations to those arrested. That news outlet reported:

[Protesters] sat down in an intersection in front of the fenced-off Supreme Court building as a U.S. Capitol Police officer warned they were involved in illegal demonstration activity and would be arrested if they didn’t move.

A few minutes later, as lawmakers and protesters chanted in support of abortion rights, U.S. Capitol Police officers began leading them away to a shaded, grassy area nearby where they would be charged with crowding, obstructing or incommoding under District of Columbia law and told they needed to pay a $50 fine. WASHINGTON, DC - JULY 19: Rep. Ilhan Omar (D-MN), Rep. Cori Bush (D-MO) after others are processed while being detained after participating in a sit-in outside the Supreme Court of the United States during a sit-in protesting the high court overturning Roe v. Wade with activists from Center for Popular Democracy Action (CPDA) on Capitol Hill on Tuesday, July 19, 2022 in Washington, DC. (Kent Nishimura / Los Angeles Times via Getty Images)

Why Weren't Members of Congress Handcuffed?

The claim that these arrests were "faked" or "staged" was based in part on the observation that none of the people protesting, including members of Congress, were handcuffed.

When we reached out to Capitol Police to find out why officers did not use the restraints, a spokesperson told us that handcuffing is not standard for a "noncustodial arrest" — or, an arrest in which officers issue a citation and tell the suspect to leave the area. The spokesperson said:

"Nobody was handcuffed as is standard for a noncustodial arrest. Everyone was arrested for Crowding, Obstructing or Incommoding (DC Code § 22–1307)."

In other words, while members of Congress were indeed arrested by Capitol Police during the July protest, they were not taken into custody. They were given citations and told to leave the area.

Why Did AOC, Omar Put Hands Behind Their Backs?

Another factor behind the claim that the arrests were fake or staged was visual evidence showing Ocasio-Cortez and Omar holding their cuffless hands behind their backs as Capitol Police officers led them away from the July 19 protest. These images and videos were authentic.

After rumors that AOC and Omar had "staged" this arrest went viral, the New York congresswoman took to Twitter to refute these allegations and explain why her hands were behind her back. Ocasio-Cortez said that there was nothing fake about her arrest and that "putting your hands behind your back is a best practice while detained."

Omar also addressed these rumors. On Instagram, the Minnesota congresswoman shared an image of her citation and a piece of text labeling the accusation that she had faked her arrest a desperate smear: Here's a video of the protest and subsequent arrests via WCNC-TV in Charlotte, North Carolina: