Did Ben Franklin Publish a Recipe in a Math Textbook on How to Induce Abortion?

Such recipes have been common since the early days of the U.S. 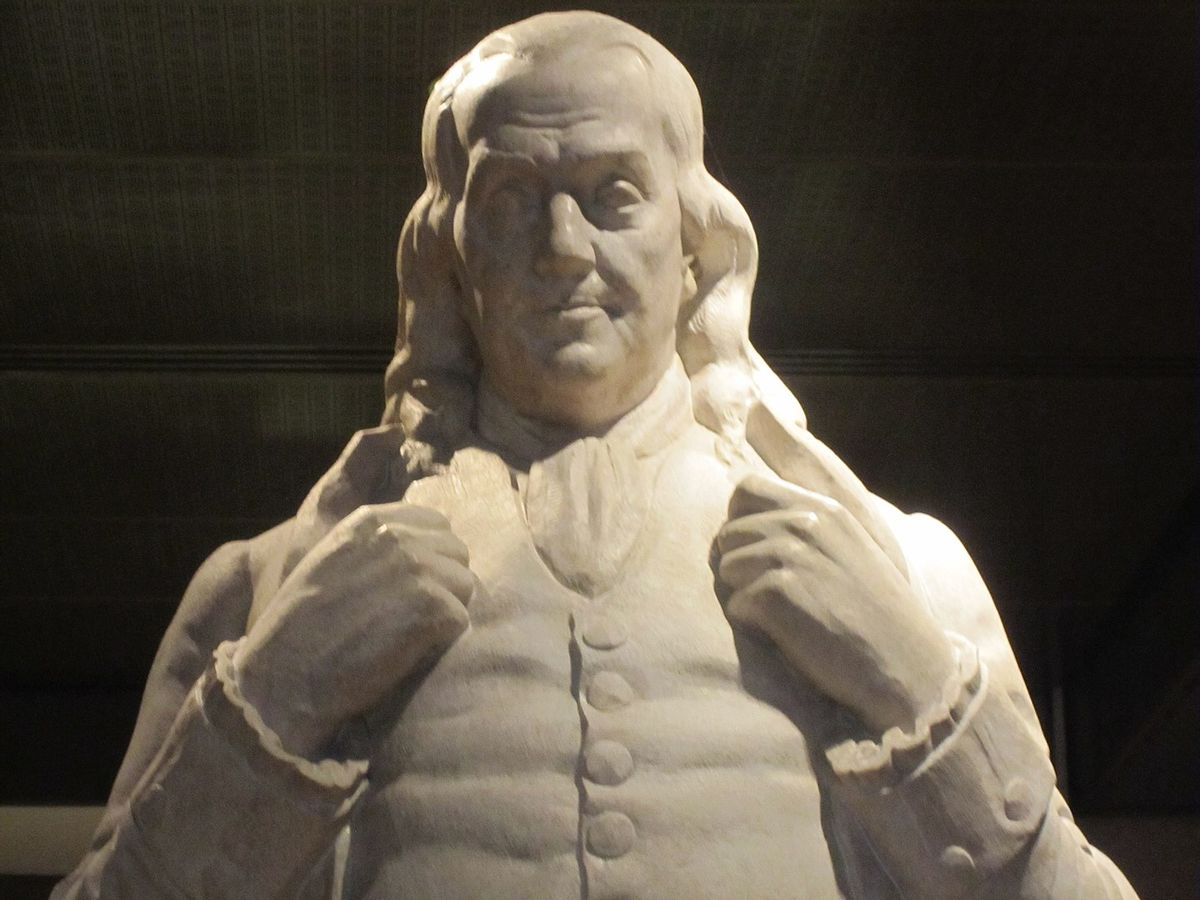 When founding father Benjamin Franklin set about adapting a British manual for the American colonies, he also happened to include a recipe for how to bring about an abortion.

In 1748, Franklin’s printing house published a manual titled “The American Instructor or Young Man’s Best Companion,” which provided all kinds of advice on arithmetic, writing and spelling, bookkeeping and more. Franklin had been looking to adapt the British manual titled “The Young Man’s Companion” published in London a few decades earlier, with significant changes.

Published by Franklin and his printing partner David Hall, this manual was essentially a reprint of the British version with new sections added, including John Tennent’s “The Poor Planter’s Physician.” The preface to the new edition states:

[...] in the British Edition of this Book, there were many Things of little or no Use in these Parts of the World: In this Edition those Things are omitted, and in their Room many other Matters inserted, more immediately useful to us Americans.

We found a 10th edition to the same “American Instructor” published by Franklin and Hall in 1758, which carries almost the same material as the previous edition. “The Poor Planter’s Physician” section contains an entry about “Suppression of the Courses,” which reads:

Now I am upon Female Infirmities, it will not be unreasonable to touch upon a common Complaint among unmarried women, namely The Suppression of the Courses. This don’t only disparage their Complexions, but fills them besides with sundry Disorders. For this Misfortune, you must purge with Highland Flagg (commonly called Belly ach Root) a Week before you expect to be out of Order ; and repeat the same two Days after: the next Morning drink a Quarter of a Pint of Pennyroyal Water, or Decoction, and as much again at Night when you go to Bed. Continue this 9 Days running ; and after resting 3 Days, go on with it for 9 more. Ride out every fair Day, stir nimbly about your Affairs, and breathe as much as possible in the open Air, [...] While “suppression of the courses” can apply to any medical condition that results in the suspension of one’s menstrual cycle, the entry specifically refers to “unmarried women.” Described as a “misfortune” it recommends a number of known abortifacents from that time, like pennyroyal water and bellyache root, also known as angelica.

According to the article, “Persephone's Seeds: Abortifacients and Contraceptives in Ancient Greek Medicine and Their Recent Scientific Appraisal,” published in the Pharmacy in History journal by the University of Wisconsin Press: “There is evidence that pennyroyal [...] and other medicinal plants were used in Ancient Greece as anti-fertility agents [...] These anti-fertility agents, which were administered orally or as vaginal suppositories, may have functioned as early term abortifacents and contraceptives in women.”

The ninth edition entry, reprinted in Slate, also recommends the use of “Harts-horn.” Harts-horn, according to Merriam-Webster, is an “American pasqueflower.”  According to “Edible and Medicinal Plants of the West” by herbalist Gregory L. Tilford, pasqueflowers were used by Native Americans to induce abortions, or speed up childbirth.

The entry concludes with warning patients off “taking Opiates too often, or Jesuits-Bark” and “nor must they long for pretty Fellows, or any other Trash whatsoever” a statement that indicates they should not have sex.

Jesuit’s bark, also known to us as quinine, was an important anti-malarial drug. According to Molly Farrell, an associate professor of English and the history of science who first reported on Franklin's abortion entry in Slate, it was also “mistakenly thought to be an abortifacient.”

The abortion recipe may or may not have actually been effective, given that it was prescribing herbs and ancient remedies far removed from our modern scientific methods for carrying out abortions. Modern scientists and experts agree that herbal abortions just don’t have the same efficacy as medical abortions, and should not be relied on. The use of pennyroyal to induce an abortion came up in a contemporary case from the 1990s, when a young woman named Kris Humphrey died as a result of ingesting the herb, not knowing that she had an ectopic pregnancy.

What did Franklin himself think about abortions? In 1728 during his early years as a printer, he generated controversy over something he would end up doing himself. According to “Benjamin Franklin: An American Life” by Walter Isaacson, he “manufactured” an abortion debate, largely because he wanted to crush a rival, but his own opinions may not have been too strong about it. Franklin wrote a series of anonymous letters for another paper to draw attention away from Samuel Keimer’s paper:

The first two pieces were attacks on poor Keimer, who was serializing entries from an encyclopedia. His initial installment included, innocently enough, an entry on abortion. Franklin pounced. Using the pen names “Martha Careful” and “Celia Shortface,” he wrote letters to Bradford’s paper feigning shock and indignation at Keimer’s offense. As Miss Careful threatened, “If he proceeds farther to expose the secrets of our sex in that audacious manner [women would] run the hazard of taking him by the beard in the next place we meet him.” Thus Franklin manufactured the first recorded abortion debate in America, not because he had any strong feelings on the issue, but because he knew it would help sell newspapers.

The letters by "Careful" and "Shortface" are available in the National Archives, among the papers of the founding fathers. In one entry, “Shortface” wrote:

I did not Expect when thou puts forth Thy Advertisement concerning Thy Universal Instructor, (as Thou art pleas’d to call it,) That, Thou would have Printed such Things in it, as would make all the Modest and Virtuous Women in Pennsilvania ashamed.

According to the National Archives, “From the style and circumstance of the letters, however, the editors believe that Martha Careful and Caelia Shortface were probably one, and that Franklin may have been her name.”

Whatever Franklin’s own feelings were on the issue, he did indeed add an entry on abortion in the manual he printed in 1748, despite possibly calling out another publisher for doing the same two decades earlier.

Fisher, George, and Fisher, Anne. "The American Instructor, Or, Young Man's Best Companion: Containing Spelling, Reading, Writing and Arithmetick, in an Easier Way Than Any Yet Published, and how to Qualify Any Person for Business, Without the Help of a Master. Instructions to Write Variety of Hands, with Copies Both in Prose and Verse … Also Merchants Accompts … with a Description of the Several American Colonies. Together with the Carpenter's Plain and Exact Rule, Shewing how to Measure Carpenters, Joyners, Sawyers, Bricklayers, Plaisterers, Plumbers, Masons, Glasiers and Painters Work … Likewise the Practical Gauger Made Easy, the Art of Dialling, and how to Erect and Fix Any Dial, with Instructions for Dying, Colouring, and Making Colours. To which is Added, The Poor Planter's Physician. With Instructions for Marking on Linnen, how to Pickle and Preserve, to Make Divers Sorts of Wine and Many Excellent Plaisters and Medicines, Necessary in All Families. And Also, Prudent Advice to Young Tradesmen and Dealers. The Whole Better Adapted to These American Colonies, Than Any Other Book of the Like Kind." United States, B. Franklin and D. Hall, 1758. Accessed 16 May 2022.

“Women Are Learning About Herbal Abortion Online — Here’s Why That’s a Problem.” Mic, https://www.mic.com/articles/128589/women-are-learning-about-herbal-abortion-online-here-s-why-that-s-a-problem. Accessed 16 May 2022.