Ukraine, US Biolabs, and an Ongoing Russian Disinformation Campaign

In an attempt to justify Russia's invasion of Ukraine, propagandists claimed the attack was focused on secret U.S. biolabs there. 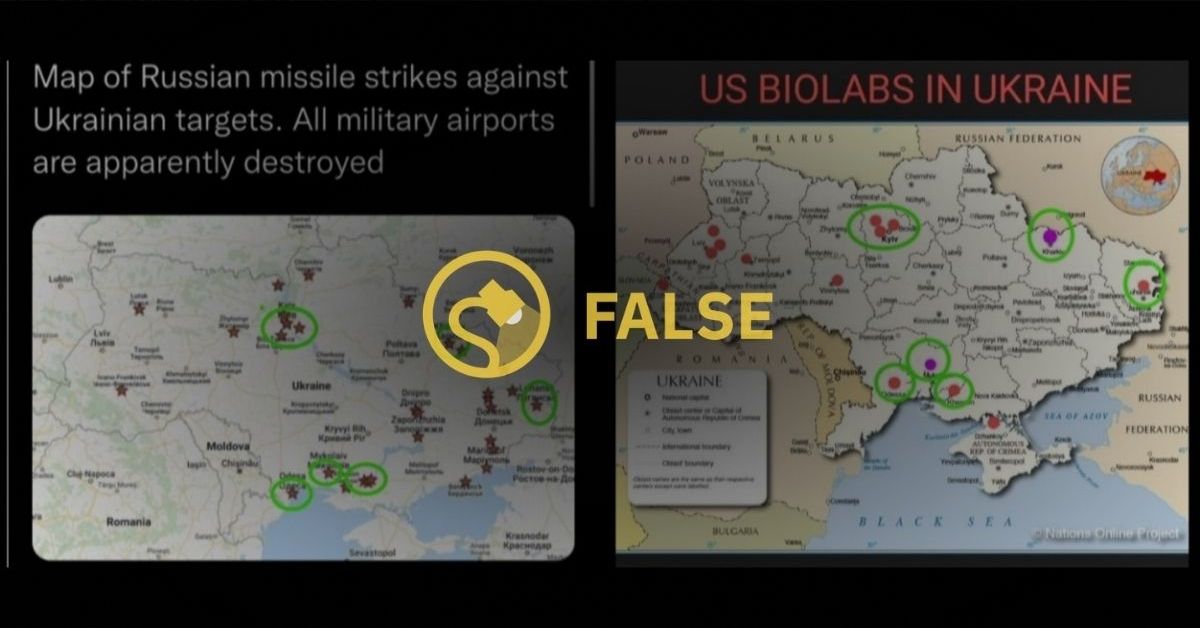 In the early hours of Feb. 24, 2022 (local time), as Russia conducted what Ukrainian leaders described as a "full-scale attack" on Ukraine, the hashtag #USBiolabs started to trend on Twitter as dozens of accounts repeated a piece of Russian propaganda, claiming that the actual focus of Russia's invasion of Ukraine was secret U.S. biolabs where deadly diseases (such as COVID-19) were supposedly being produced.

The claim that the U.S. is operating secret biolabs in Ukraine is one that has been repeatedly spread by Russian propagandists since at least 2018. In May 2020, the Security Service of Ukraine (SBU) released a statement calling on politicians to stop spreading false information about the existence of foreign military biological labs in Ukraine:

In February 2022, during the invasion of Ukraine, this false rumor started trending on Twitter after @WarClandestine posted a thread claiming that a map of Russia's missile attacks lined up with the locations of these biolabs: Before we get into the factual details that disprove this theory (such as the fact that the U.S. did not install and does not operate biolabs in Ukraine, completely nullifying the second half of this comparison), let's note a few quick observations about these two maps.

Is COVID-19 a Bioweapon?

Conspiracy theories are very often built on top of one another. The claim that the U.S. is operating biolabs in Ukraine, for example, is built on the false notion that the United States (or, according to similar theories, China) intentionally started the COVID-19 pandemic with a human-made bioweapon. Once you buy into that rumor, you can be sold the next: that Russia is invading Ukraine to stop the next pandemic.

On social media, a number of people responded to a #usbiolabs thread with false claims about Russia attacking Ukraine to stop a "Covid-2" bioweapon from being released: The problem, of course, is that there is no credible evidence that COVID-19 is a biological weapon. Stanley Perlman, MD, PhD, professor of microbiology and immunology and pediatric infectious diseases at the University of Iowa in Iowa City, said:

"COVID-19 is sufficiently unlike other viruses to have been created from them, and making a virus in the lab from scratch would be "virtually impossible ... I don't think we know enough about coronaviruses — or any virus—to be able to deliberately make a virus for release."

Did the U.S. Military Install Biolabs in Ukraine?

Conspiracy theories are often fashioned from a small morsel of truth. In this case, the rumors are a distortion of the fact that the Ministry of Health of Ukraine and the Department of Defense of the United States of America entered into an agreement in 2005, while Republican U.S. President George W. Bush was in office, to "stem the threat of bio-terrorism by placing safeguards on deadly pathogens dating from a Soviet-era biological weapons program," according to a contemporaneous news article in the Chicago Tribune. While the U.S. Defense Department's Biological Threat Reduction Program provided some funding to upgrade biolabs in the Ukraine, these facilities are operated by the Ukrainian government under guidelines set under Ukrainian law.

According to the SBU, in 2005 the Ministry of Health of Ukraine and the U.S. Department of Defense signed a framework agreement to prevent the spread of technologies, pathogens and knowledge that can be used in the development of biological weapons. As part of this Agreement, a number of state laboratories located in Odesa, Kharkiv, Lviv, Kyiv, Vinnytsia, Kherson, Dnipropetrovsk regions were modernized (repair work was carried out, equipment was updated, supplies were purchased, etc.).

“We emphasize that these laboratories are financed from the state budget, are subordinate to the Ministry of Health and the state service on food safety and consumer protection," the SBU said.

There is no evidence to indicate that these labs were "installed" by the U.S. military, nor that they are operated by U.S. forces. Here's a video about what these labs actually do and the ongoing disinformation campaign that targets them.

The rumors in the aftermath of the February 2022 invasion of Ukraine by Russia were just the latest iterations of an ongoing disinformation campaign that has been waged by the Kremlin for years. Sophie Gelava of the Tbilisi-based Media Development Foundation (MDF), an organization that monitors Russian statements, said that the Kremlin has been “actively spreading black propaganda against the laboratory since the day it was established."

Coda Story, a news organization that sent reporters to one of these labs to investigate these claims in 2018, reported:

Even if the claims shift, the strategy is the same according to Sophie Gelava, depicting the lab as secretive and dangerous “so often that people start believing it.”

Now the MDF team has a growing list of examples of Russian officials or media outlets trying to use the Lugar Lab as a diversionary issue in the public relations battle over the poisoning of former Russian double agent Sergei Skripal and his daughter Yulia.

“The intensity of these stories [about the lab] and the channels of distribution indicate that all of this is orchestrated directly from the Kremlin,” says Nodar Tangiashvili of East-West Management Institute, a U.S. non-profit organization which helps fund the MDF monitors.

Yet those associated with the lab doubt the Russians really believe all their own allegations, because they are sure their intelligence services have their own picture of what really goes on inside. “They must have had their own agents in there at some point,” said the American source.

A number of other media organizations have come to the same conclusion about the biolabs claim:

And lastly, the U.S. Embassy in Ukraine has addressed these rumors in the past. In April 2020, a statement was released to "set the record straight" regarding this disinformation campaign:

The U.S. Embassy would like to set the record straight regarding disinformation spreading in some circles in Ukraine that mirrors Russian disinformation regarding the strong U.S.-Ukrainian partnership to reduce biological threats.

Here in Ukraine, the U.S. Department of Defense’s Biological Threat Reduction Program works with the Ukrainian Government to consolidate and secure pathogens and toxins of security concern in Ukrainian government facilities, while allowing for peaceful research and vaccine development. We also work with our Ukrainian partners to ensure Ukraine can detect and report outbreaks caused by dangerous pathogens before they pose security or stability threats.

Our joint efforts help to ensure that dangerous pathogens do not fall into the wrong hands. We’re proud to partner with the Ministry of Health, State Service of Ukraine for Food Safety and Consumer Protection, National Academy of Agrarian Sciences, and the Ministry of Defense to make us all safer.

In sum, there's no evidence that Russia was targeting "U.S. biolabs" when they launched a full-scale attack on Ukraine in February 2022. This claim was just the latest iteration in a long-running disinformation campaign by the Kremlin and its supporters.

“Does the US Have A Secret Germ Warfare Lab on Russia’s Doorstep?” Coda Story, 19 Apr. 2018, https://www.codastory.com/disinformation/does-the-us-have-a-secret-germ-warfare-lab-on-russias-doorstep/.

“Russian Media Spreading Disinformation about US Bioweapons as Troops Mass near Ukraine.” Bulletin of the Atomic Scientists, 8 Feb. 2022, https://thebulletin.org/2022/02/russian-media-spreading-disinformation-about-us-bioweapons-as-troops-mass-near-ukraine/.

“SBU: No US Biological Laboratories in Ukraine.” Kyiv Post, 8 May 2020, https://www.kyivpost.com/ukraine-politics/sbu-no-us-biological-laboratories-in-ukraine.html.