Did Disney Animators Have to 'Fight' to Give 'Encanto' Character Luisa Muscles?

Internet news articles reporting the alleged controversy are based on a single tweet that contains vague wording. 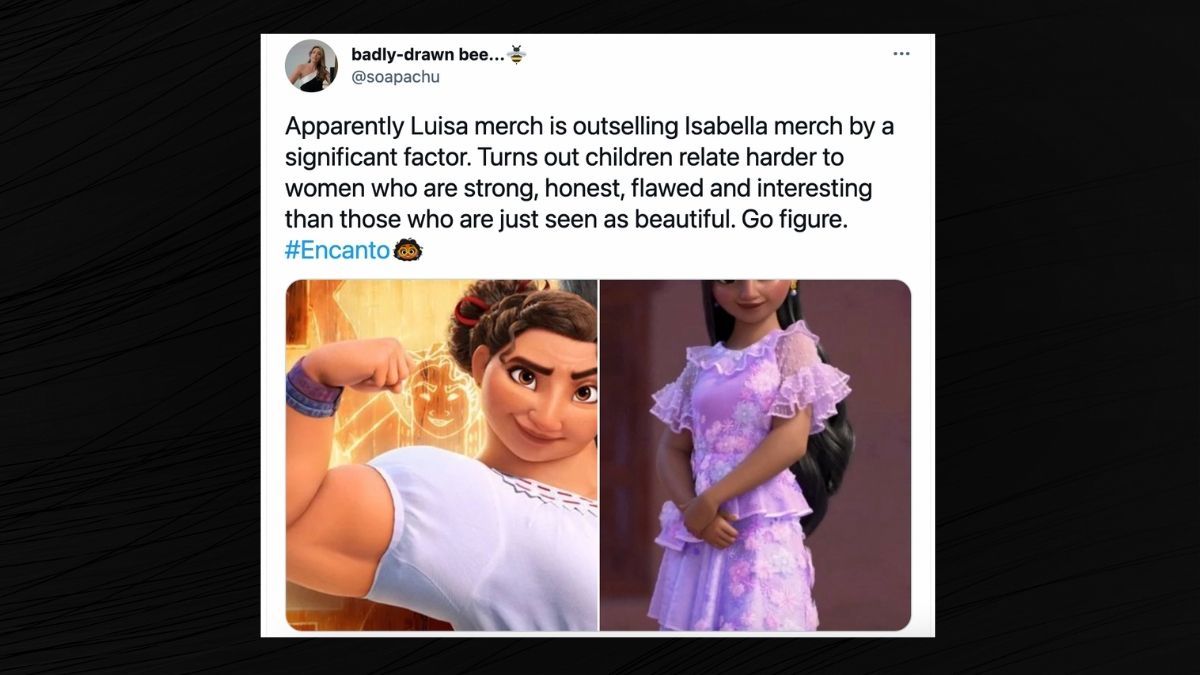 In January 2022, Snopes readers asked about a meme circulating on Facebook alleging that Disney animators had to "fight" with corporate brass to create the "Encanto" character Luisa, who is gifted with superhuman strength and big muscles, only to see Luisa-themed merchandise be more in demand than other characters from the movie.

The meme was an example of copypasta, or text that goes viral by way of users copying and pasting from one account to another. Because individual Facebook users may not intend for their posts to gain national attention, we will not name the person who originally published it. The text of the meme reads:

The artists for Encanto had to really fight Disney to let Luisa have big muscles....because we can't pretend Disney isn't superficial and misogynistic. Anyway. Jokes on them because little girls have GRAVITATED to this buff AF character and they were not prepared for the amount of demand for Luisa merch when they made a bunch of Isabella merch that isn't selling well bc they thought kids would like the classically beautiful character the most. They were wrong. Turns out the kids want giant muscle lady. Thanks. I love it.

This prompted reader inquiries about the factuality of the post.

"Wondering about the new film Encanto based on a meme claiming artists had to fight Disney to have a large woman as a main character," one reader wrote.

"Is Disney selling out of Luisa merchandise? Did 'they' have to 'fight' to get Disney to include a female character in Encanto with muscles?" another asked.

The 2021 animated movie "Encanto" is about the Madrigal family, each of whom is gifted with special powers derived from their magical home. The character Luisa's power is strength, and her muscular physique reflects that.

News articles and posts that claim animators had to "fight" Disney to give Luisa that frame, which runs counter to the slight builds of most other female Disney protagonists, are all derived from a single tweet posted by a Disney animator, but the statement itself is a bit vague and doesn't necessarily prove that there was a "fight" over Luisa's body-builder figure.

The website Comic Book Resources, or cbr.com, for example, ran the headline, "Encanto Artists Had to Fight Disney for Luisa's Fan-Favorite Muscular Frame."

The story quotes Dylan Ekren, an illustrator who worked on "Encanto," as tweeting in July 2021:

"I think we all just wanted to do it in a way that worked well with the style and really made sense for the character and I’m really proud of the way that she turned out. The entire team was so awesome. I just pushed buttons in the right order."

The entertainment website HITC.com pointed to social media posts written by people who are purportedly on the hunt for Luisa-themed merchandise, who say the issue is that Disney failed to anticipate the popularity of the character and didn't create enough.

We attempted to reach out to Ekren via an email address listed on the animation site ArtStation.com and will update this story if we receive a response. We also reached out to Disney to inquire about whether Luisa merchandise was indeed outselling merchandize for the character Isabela, who has the slim figure most often drawn for Disney princesses, but didn't receive a response in time for publication.