Are Democrats Considering Using the 14th Amendment To Bar Trump from Office?

The proposal has been raised periodically since the days following the attack on the U.S. Capitol on Jan. 6, 2021. 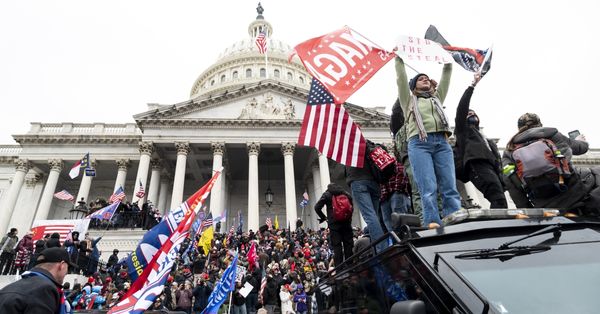 In the days and weeks immediately after supporters of former U.S. President Donald Trump attacked the U.S. Capitol on Jan. 6, 2021, news reports indicated that some Democratic members of Congress and legal experts were exploring the prospect of using the Constitution to bar Trump from future office.

News stories about Democratic legislators and legal experts exploring the U.S. Constitution's 14th Amendment to prevent Trump from running for public office again cropped up around the one-year anniversary of the attack in January 2022, although it's unclear to us as of this writing whether any concrete steps have been taken to that end.

In January 2021, ABC News reported that members of Congress and legal scholars were examining Section 3 of the 14th Amendment, which bars anyone "engaged in insurrection or rebellion" against the U.S. from holding future office. But ABC noted that the Reconstruction-era provision "has rarely been used or tested, and so scholars are unsure about how exactly Congress could exercise authority under this provision and to what end today."

In another example, on Feb. 11, 2021, Fox News reported that several Democratic legislators, including U.S. Sen. Tim Kaine, D-Va., were actively exploring the portion of the Constitution's 14th Amendment that bars anyone "engaged in insurrection or rebellion" from holding future office.

News stories saying the same cropped up one year later, many based on a Jan 6. 2022, article published by the Washington, D.C., national political news site The Hill.

But The Hill's reporting is basically the same as previous coverage from a year prior, in that while the matter is and has been an ongoing topic of discussion, there isn't any new action toward using that method to bar Trump from public office.

"Calls for Congress to take steps to strip Trump of his eligibility, which reached a crescendo in the aftermath of the Jan. 6 riot, have since decreased," The Hill reported. "But those who remain engaged on the issue say discussions about applying Section 3 of the 14th Amendment have been ongoing."

The Hill also quoted Harvard Constitutional expert Laurence Tribe as stating that the idea has "waxed and waned," and that "I hear it being raised with considerable frequency these days both by media commentators and by members of Congress and their staffs, some of whom have sought my advice on how to implement Section 3."

How that would happen, if Congress selected to go that route, is complicated because the situation is unprecedented, The Hill reported. Members of Congress and election integrity advocates could pursue legislation, lobbying campaigns to exclude Trump or take their cases to the courts, but the bottom line is that it would be a lengthy and involved process.

In the lead-up to the November 2020 presidential election, Trump aggressively pushed a disinformation campaign in which he and his supporters falsely claimed that massive-scale ballot fraud cost him the election.

As of this writing, it's unknown as to whether Trump will seek to hold public office again, though he has publicly flirted with the idea of running for president again in 2024, although he is facing legal obstacles, including ongoing and potential criminal probes into his business dealings and an inquiry by the U.S. House Select Committee on the January 6 Attack into his role in the the Jan. 6, 2021, violence instigation.

Once that committee makes clear, as I trust it will, that what took place was indeed an insurrection that triggers Section 3 of the 14th Amendment and that supports criminal prosecution by DOJ of those responsible, it is difficult to imagine this not becoming a logical next step,

Sherman, Amy. “A Timeline of What Donald Trump Said before the Capitol Riot.” Poynter, 11 Feb. 2021, https://www.poynter.org/fact-checking/2021/a-timeline-of-what-donald-trump-said-before-the-capitol-riot/.