The installation of a sculpture of a winged jaguar outside U.N. headquarters inspired apocalyptic rumors. 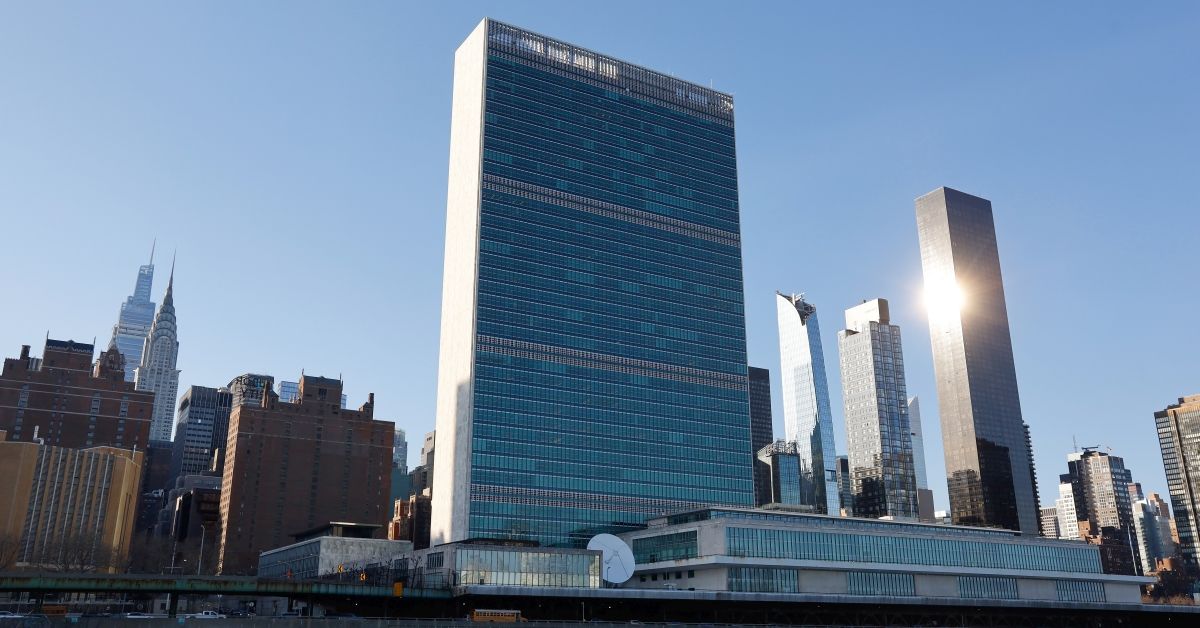 In December 2021, an image supposedly showing a statue of a winged lion that was installed outside of a United Nations building was circulated on social media by people claiming that the artwork depicted an "End Times" beast. This is a genuine statue that was installed outside of the U.N. While a number of people have expressed the opinion that this statue resembles a beast mentioned in the Bible, there are a few things to note about this claim. First, this statue was created to depict a "guardian of peace and security," not an apocalyptic monster. Second, the beast in the biblical passage (which is referred to as a lion, not a jaguar) is generally thought to represent a kingdom. And lastly, this is hardly the first time a statue has depicted a big cat with wings. In other words, not all "winged lions" are harbingers of doom.

This statue, which depicts a jaguar with an eagle's wings, was installed outside of U.N. headquarters in New York. It was created by artists Jacobo and Maria Angeles as a "guardian for international peace and security" and was donated to the U.N. by the government of Oaxaca, Mexico in December 2021.

The artists write on their website that they created two "Guardian" sculptures and sent them to New York City on a mission of "accompanying and protecting all Latin American, Mexican and Oaxacan migrants who live or are about to arrive in the United States looking for a better future for their families."

While this statue is undoubtedly real, does it resemble an apocalyptic beast? This claim is largely based on a biblical passage in which the prophet Daniel speaks of a vision in which he saw "four great beasts." Daniel says that the first beast "was like a lion, and it had the wings of an eagle."

In the first year of Belshazzar king of Babylon, Daniel had a dream, and visions passed through his mind as he was lying in bed. He wrote down the substance of his dream.

Daniel said: “In my vision at night I looked, and there before me were the four winds of heaven churning up the great sea. Four great beasts, each different from the others, came up out of the sea.

“The first was like a lion, and it had the wings of an eagle. I watched until its wings were torn off and it was lifted from the ground so that it stood on two feet like a human being, and the mind of a human was given to it.

While Daniel does refer to a beast that looked like a lion with an eagle's wings, it is later explained that these beasts represented kingdoms. Safwat Marzouk, an associate professor of Old Testament at Union Presbyterian Seminary, wrote:

The four beasts represent four kingdoms or empires, while the one that looks like a human being represents the kingdom of God manifested among the holy ones of the Most High. Scholars have understood the beasts in Daniel 7 as referring to four empires: Babylon, Persia, Mede, and Greece.3

Unsatisfied with this brief interpretation, Daniel desires to know more about the fourth repulsive and terrifying beast and, more importantly, about the little horn that appeared on its head. This is a fourth empire, the heavenly being informs Daniel, and the little horn is an arrogant king who will speak against the Most High and will persecute the holy ones. He “will attempt to change the sacred seasons and the law.” The first three kingdoms will lose their dominion, while the fourth beast will be put to death. Its body will be destroyed and will be given over to be burned with fire. In contrast to these beast-ly kingdoms, the kingdom of God, which is represented by a human being, will endure forever.

When humans are content with their humanness, their potential monstrosity is avoided. This is evident in what happened to the first beast, which represents the Babylonian empire. In Daniel 7, the winged lion was given a human heart, which seems to be a reference to Nebuchadnezzar returning to his dominion when he recognized that all pow-er belongs to God. In Daniel 7, the dominion of the one who looks like a human being and the holy ones of the Most High is seen as a gift from the Ancient of Days.

Is This the Only Winged Cat Statue?

While social media users claimed that the statue installed in front of the U.N. was some sort of apocalyptic warning sign, statues depicting large cats with wings can be found all over the world. The following photos, for example, shows similar statues in Venice, Italy; Leicester, England; Prague, Czech Republic; and Madrid, Spain. “Monstrous Empires and the Kingdom of God: What Do Monsters Reveal about the Empire?” Columbia Theological Seminary, https://www.ctsnet.edu/at-this-point/monstrous-empires-kingdom-god-monsters-reveal-empire-2/. Accessed 14 Dec. 2021.

“UN Sculpture Looks a Lot Like the End Times Beast Referred to in Daniel 7 and Revelation 13.” CBN News, 10 Dec. 2021, https://www1.cbn.com/cbnnews/world/2021/december/un-sculpture-looks-a-lot-like-the-end-times-beast-referred-to-in-daniel-7-and-revelation-13.

Correction [Dec. 15, 2021]: Erroneous attribution to Book of Revelation corrected to Book of Daniel.