What is 'Court Packing,' and What Are the Latest Democratic Proposals About?

A plan by congressional Democrats to expand the Supreme Court from nine to 13 seats touched upon a hugely controversial episode in American political history. 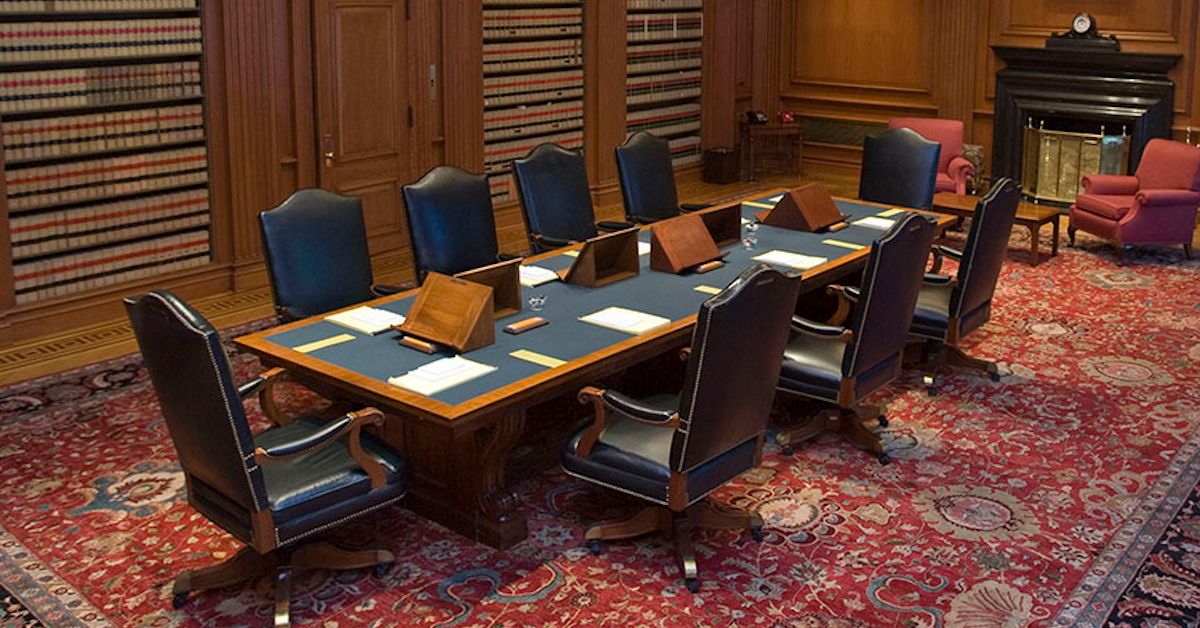 In April 2021, progressive Democratic members of the House of Representatives and Senate introduced a bill that would increase the number of justices on the U.S. Supreme Court from nine to 13.

The legislation itself was remarkably short, replacing just two words in the text of existing federal law. However, the Judiciary Act of 2021 touched on an infamous episode in American political history, and had the potential to inflame tensions within the Democratic Party.

In response to inquiries from Snopes readers, the following is a breakdown of what "court-packing" is, its history, and why it's in the news again in April 2021.

The phrase itself dates to at least the late 19th century, and is a (typically derogatory) way to describe the practice of one party or another using a moment of political opportunity — usually a legislative majority — to attempt to expand the size of federal courts, especially the U.S. Supreme Court, in order to add judges and justices they perceive as sympathetic to their broader ideology, or specific policy goals.

The less widely debated corollary to court packing is "court unpacking," by which the size or number of courts is decreased instead of increased, but for similar reasons of political opportunism. For example, following Abraham Lincoln's assassination in 1865, and the elevation of Andrew Johnson to the presidency, Congress shrank the size of the Supreme Court from 10 to seven seats, denying Johnson the opportunity to appoint additional judges of his own, but then increased it back to nine in 1869, for the presidency of Ulysses S. Grant.

The number and size of federal courts have been a point of political dispute and controversy primarily because the U.S. constitution did not set out a fixed number of courts (apart from prescribing that there only be one Supreme Court), or a fixed number of seats on each court, but rather left those determinations to the U.S. Congress. Article 3 states only that:

The judicial Power of the United States, shall be vested in one supreme Court, and in such inferior Courts as the Congress may from time to time ordain and establish. The Judges, both of the supreme and inferior Courts, shall hold their Offices during good Behaviour, and shall, at stated Times, receive for their Services, a Compensation, which shall not be diminished during their Continuance in Office.

While the number of justices on the Supreme Court has been changed several times in U.S. history, and no legal or constitutional barrier exists to changing the size of the court again, the practice has been widely (though not universally) regarded as being close to a political taboo for much of the last century. The primary reason for that is the controversy and fallout from President Franklin Delano Roosevelt's court-packing plan of the 1930s.

Roosevelt won a landslide reelection in 1936, but an effective conservative majority on the Supreme Court had threatened his New Deal agenda by striking down, one by one, a series of major initiatives including the National Recovery Administration and the Agricultural Adjustment Administration. In response, FDR set about changing the composition of the court itself.

In the first "fireside chat," or national radio address, of his second term in office, in March 1937, Roosevelt lamented what he described as a constitutional crisis, caused by what he presented as ideologically driven judicial overreach. He outlined the following plan: For every Supreme Court justice who reaches the age of 70, and declines to retire, the sitting president can appoint an additional justice. Since, at that time, six of the nine justices on the court were aged over 70, the proposal would have given FDR the potential chance to appoint as many as six new justices to the court, which could have been expanded to 15 members.

Both sides believed the future of the country was at stake. If Roosevelt won, opponents warned, he would destroy the independence of the judiciary and create an evil precedent for successors who wished to “pack” the court. If Roosevelt lost, his supporters countered, a few judges appointed for life would be able to ignore the popular will, destroy programs vital to the welfare of the people, and deny to the president and Congress the powers exercised by every other government in the world.

Later in March 1937, the Supreme Court issued a surprising ruling that changed the course of the court-packing fight. One of Roosevelt's major goals in his New Deal agenda was the introduction of policies to protect the pay and conditions of workers, including minimum wage and fixed working week laws. The Supreme Court dealt successive blows to that broader agenda in 1935 and 1936, when it struck down a federal and New York state law, respectively, which contained minimum wage provisions.

In March 1937, the court ruled on the constitutionality of a similar minimum wage law, in Washington state. This time, the Supreme Court upheld the constitutionality of the minimum wage law, by a vote of 5-4, with the key swing vote coming from Justice Owen Roberts. For the next year or so, Roberts began to vote with the liberal wing of the court, creating a narrow majority that went on to uphold and protect several New Deal policies.

This relatively sudden shift in Roberts' voting pattern became known as the "switch in time that saved nine." After the summer of 1937, Roosevelt's plan went no further, due to the fact that it was unpopular among Democrats in Congress, divided public opinion, and because the shift in Supreme Court decision-making had undermined much of the impetus for Roosevelt's court-packing plan. After all, if the court was now upholding the bulk of his legislative agenda, why push through a divisive plan to radically restructure the court, in order to achieve the same aim?

The Return of Court-Packing and the Judiciary Act of 2021

Although Roosevelt's court-packing project ultimately petered out, that relatively short episode in American political history has had far-reaching consequences. As a result of the bitter public debate over the plan, and the specter of a sitting president attempting to radically restructure the nation's highest court for fairly naked political or policy reasons, court-packing has become something close to a taboo in American politics, in the ensuing decades.

However, that consensus has begun to crumble in recent years, as Duke University law professor Marin Levy wrote in 2020:

...Even the strongest norms are susceptible to pressure, and recent moves by scholars and politicians are calling the conventional wisdom about court packing into question. Several law professors have recently put forward proposals that would increase the size of the Court. Those proposals, in turn, have gained traction with several candidates running for the 2020 Democratic presidential nomination.

The underlying argument rests, in part, on a claim that the majority-Republican Senate “unpacked” the Supreme Court by refusing to hold hearings upon the nomination of Judge Merrick Garland in 2016—in effect, the Senate reduced the number of seats on the Court from nine to eight, for political gain. And so, the argument goes, court packing can be done because it was just recently done by the Republicans, meaning it should be done by the Democrats in response.

Although several Democratic primary candidates, including future Vice President Kamala Harris, appeared sympathetic to expanding the court, President Joe Biden wasn't one of them. In 1983, when he was chairman of the Senate Judiciary Committee, Biden described court-packing as a "bonehead idea." However, under pressure from the left wing of his party, Biden in April 2021 set up a commission to study the pros and cons of reforming various aspects of the Supreme Court, including its "membership and size."

On April 15, a group of progressive Democratic senators and representatives published the Judiciary Act of 2021 — a plan to increase the total number of justices on the Supreme Court from nine to 13. At present, the size of the court is set out in federal law. U.S. Code, Title 28, Chapter 1, Section 1 states:

The Democratic Congress members behind the bill have made logistical arguments in support of it (claiming that an increased caseload and the existence of 13 federal circuits justify an increase to 13 members), but have also appealed to broader ideological considerations, and explicitly cited "Republican norm-breaking" in the context of the Garland and Barrett controversies. For instance, Massachusetts Sen. Ed Markey has said:

Republicans stole the Court’s majority, with Justice Amy Coney Barrett’s confirmation completing their crime spree. Of all the damage Donald Trump did to our Constitution, this stands as one of his greatest travesties. Senate Republicans have politicized the Supreme Court, undermined its legitimacy, and threatened the rights of millions of Americans, especially people of color, women, and our immigrant communities. This legislation will restore the Court’s balance and public standing and begin to repair the damage done to our judiciary and democracy...

Our democracy is hanging by a thread. And the far-right majority on the U.S. Supreme Court is cutting it. From Citizens United to Shelby County to Rucho, the Court has been hostile to democracy itself. If a law suppresses the right to vote, it is constitutional; if a law protects the right to vote, especially for Black and brown voters, it is unconstitutional. The American people have had enough. To restore power to the people, we must expand the Supreme Court.

For now, the Judiciary Act of 2021 appears unlikely to become law. House Leader Nancy Pelosi has said she has "no plans to bring it to the floor," while West Virginia Sen. Joe Manchin, a centrist Democrat who has what amounts to a crucial swing vote in the Senate, has said of court-packing proposals "I'm not voting for that."

Even if Democrats were to advance the bill through the House, and on to the Senate floor, the Supreme Court expansion plan would likely face a Republican filibuster, an obstacle that would almost certainly prove insurmountable, given that it would require a three-fifths majority — including 10 Republican senators — to overcome.