Important to most fascists is the idea that the nation’s “patriots” have been let down, that “good people” are humiliated while “bad people” do better. 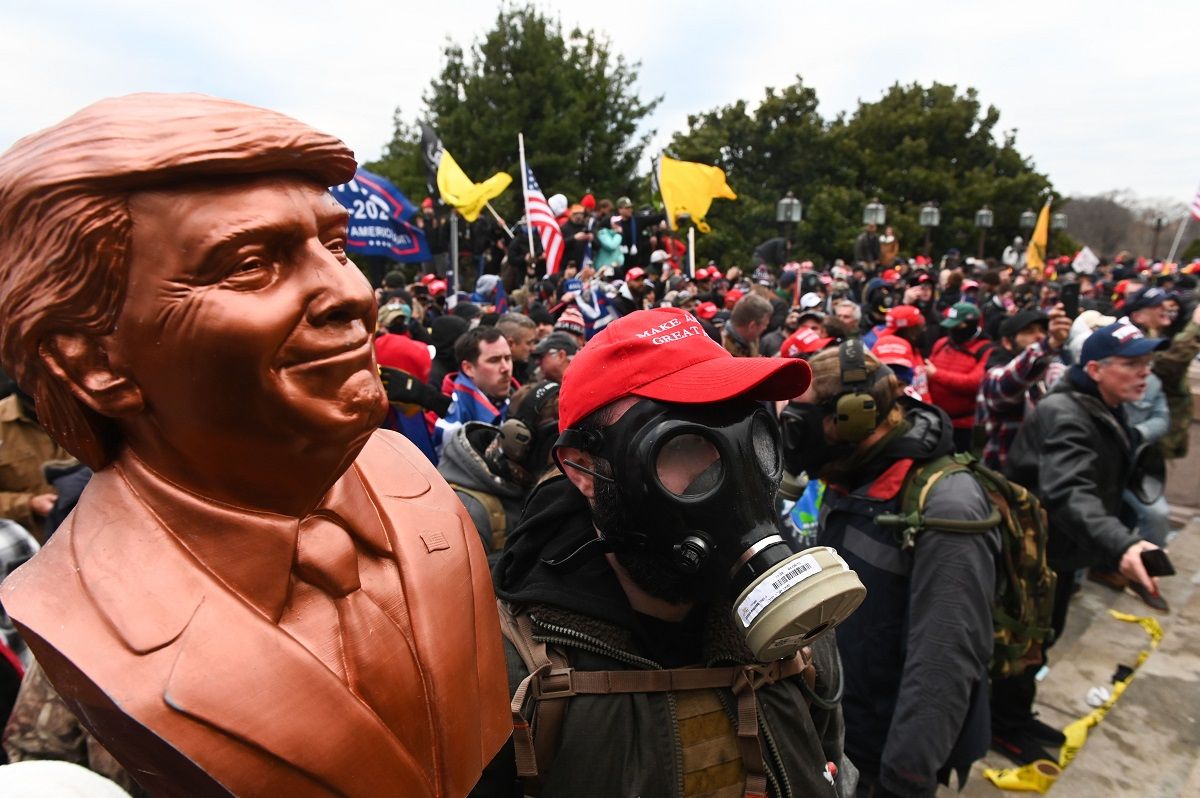 This article about fascism is republished here with permission from The Conversation. This content is shared here because the topic may interest Snopes readers; it does not, however, represent the work of Snopes fact-checkers or editors.

Since before Donald Trump took office, historians have debated whether he is a fascist.

As a teacher of World War II history who has written about fascism, I’ve found that historians have a consensus definition of the term, broadly speaking.

Given the term’s current – and sometimes erroneous – use, I think it’s important to distinguish what fascism is and is not.

Fascism, now a century old, got its start with Benito Mussolini and his Italian allies. They named their movement after an ancient Roman emblem, the fasces, an ax whose handle has been tightly reinforced with many rods, symbolizing the power of unity around one leader.

Fascism means more than dictatorship, however.

It’s distinct from simple authoritarianism – an anti-democratic government by a strongman or small elite – and “Stalinism” – authoritarianism with a dominant bureaucracy and economic control, named after the former Soviet leader. The same goes for “anarchism,” the belief in a society organized without an overarching state.

Above all, fascists view nearly everything through the lens of race. They’re committed not just to race supremacy, but maintaining what they called “racial hygiene,” meaning the purity of their race and the separation of what they view as lower ones.

That means they must define who is a member of their nation’s legitimate race. They must invent a “true” race.

Many are familiar with Adolf Hitler and the Nazi regime’s so-called Aryan race, which had no biological or historical reality. The Nazis had to forge a mythic past and legendary people. Including some in the “true race” means excluding others.

For fascists, capitalism is good. It appeals to their admiration of “the survival of the fittest,” a phrase coined by social Darwinist Herbert Spencer, so long as companies serve the needs of the fascist leadership and the “Volk,” or people.

If, for example, a company is successfully producing weapons for foreign or domestic wars – good. But if a company is enriching nonloyal people, or making money for the imagined subrace, the fascists will step in and hand it to someone deemed loyal.

If the economy is poor, the fascist will divert attention from shortages to plans for patriotic glory or for vengeance against internal or external enemies. 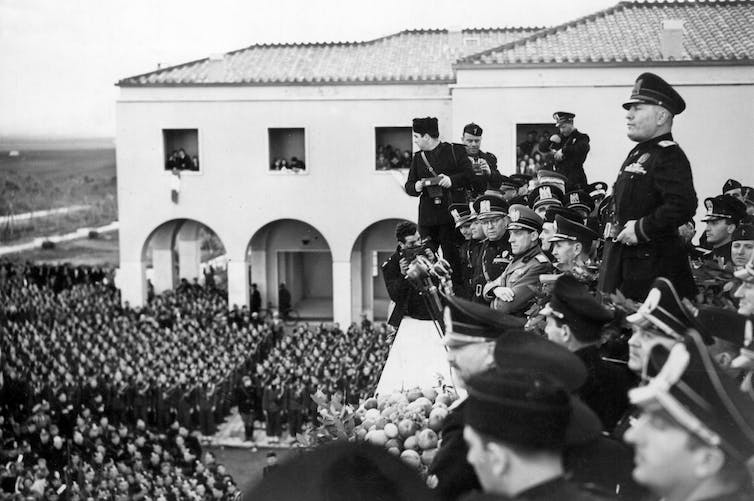 Benito Mussolini taking part in the inauguration of the first rural settlements in Agro Pontino, Italy, on Oct. 29, 1939.
Mondadori via Getty Images

Important to most fascists is the idea that the nation’s “patriots” have been let down, that “good people” are humiliated while “bad people” do better.

These grievances cannot be answered, fascists say, if things remain under the status quo. There needs to be revolutionary change allowing the “real people” to break free from the restraints of democracy or existing law and get even.

Since for them the law should be subservient to the needs of the people and the need to crush socialism or liberalism, fascists encourage party militias. These enforce the fascist will, break unions, distort elections and intimidate or co-opt the police.

The historical fascists of Germany and Mussolini’s Italy extended the might-makes-right principle to expansion abroad, though the British fascists of the 1930s, led by Oswald Mosley and his British Union of Fascists, preferred isolationism and preached a sort of internal war against an imagined Jewish enemy of the state.

First and foremost, fascists want to revolt against socialism. That’s because it threatens the crony capitalism that fascists embrace.

Not only does socialism aim for equal prosperity no matter the race, but many socialists tend to envision the eventual extinction of separate nations, which offends the strong fascist belief in nation states.

Along with getting rid of aristocrats or other elites, fascists are prepared to displace the church or seek a mutually beneficial truce with it.

Mussolini, Hitler and the Falangists in Spain learned that they had to live with, not replace, the church in their countries – as long as their regimes weren’t broadly attacked from the pulpit.

Fascists also reject democracy, at least any democracy that could potentially result in socialism or too much liberalism. In a democracy, voters can choose social welfare policies. They can level the playing field between classes and ethnicities, or seek gender equality.

Fascists oppose all of these efforts.

Fascism is the logical extreme of nationalism, the roughly 250-year-old idea that nation states should be built around races or historical peoples.

The first fascists didn’t invent these ideas out of nothing – they just pushed nationalism further than anyone had before. For the fascist, it’s not just that a nation state makes “the people” sovereign. It’s that the will of righteous, real people – and its leader – comes before all other considerations, including facts.

Indeed, the will, the people, their leader and the facts are all one in fascism.