Did Searches for 'Change My Vote' Spike After Final Prez Debate or Hunter Biden Controversy?

Trendception: A master class in the use of spurious data to make bogus and self-referential political talking points unsupported by empirical evidence. 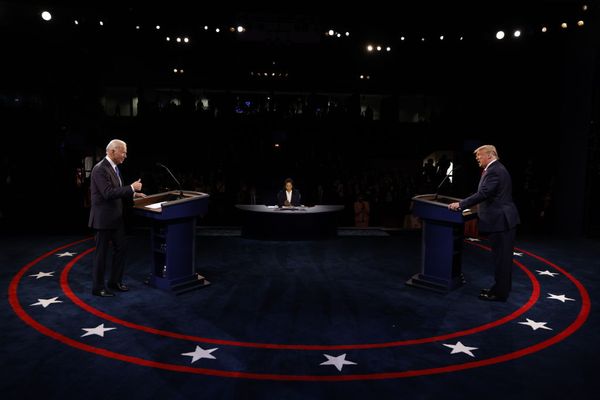 On Oct. 27, 2020, U.S. President Donald Trump asserted in a tweet that the search term "can I change my vote" was "strongly trending" on Google "since immediately after the second [presidential] debate," and that this was because people were interested in changing their vote from Democratic presidential candidate Joe Biden to Trump.

In reality, that statement isn't supported by anything resembling quantitative evidence. Instead, this tweet represents the culmination of a series of claims that have their origins in a viral Oct. 24 Facebook post. The data highlighted in this viral post — a one week look at Google Trends — did not provide any sense of the "scale" of the purported trend, nor did it provide evidence of a preference for either candidate. Nevertheless, the claim was repeated wholesale — not once, but twice — in the New York Post. A detailed look at the evolution of this talking point shows the claims to be spurious at best.

On the morning of Oct. 24, the Facebook account Unbiased America shared a picture of Google Trends data for the phrase "can I change my vote" that showed an increase of interest in that term following the Oct. 22 presidential debate between Trump and Biden. Interpreting these data, the author of the post argued:

There has been a large and continuing surge in the number of people googling “Can I change my vote”. The surge began Thursday evening during the debate, subsided overnight, and picked up again Friday morning. As of Saturday morning, the trend is continuing.

While it’s impossible to say whether Thursday’s debate is the cause of the surge (or which voters are changing their minds), most observers say that Trump’s performance in the debate marked a big improvement from his first outing. Biden, meanwhile, made a lot of politically inadvisable statements that his campaign is still trying to clean up.

A note about Google Trends: The tool allows users to investigate the relative interest in a search term over time. For whatever given period the user specifies, the datapoint with the highest number of searches is presented as "100" with the remaining data points expressed relative to that point. This has the effect of producing what looks to be a clear trend of some kind for any search term that literally does not change over time.

An archived view of what the seven-day search would have looked like when the author of the Facebook post made the claim shows that the post features a genuine graph produced with Google Trends: Does this graph show an increasing trend in the "change my vote" search term in the two days following the debate? Yes. Does this trend show anything meaningful from a public opinion standpoint? We do not know, because the data do not speak to the magnitude of interest in the trend. Do they speak in any way to a preference for either candidate? No.

While the actual Facebook post presented no evidence of an empirically meaningful or pro-Trump shift in the final weeks of the campaign, it did create a baseless talking point that would itself trend.

On Oct. 26, the New York Post published a story with the headline, "Some early voters want to change their vote after Hunter Biden exposés." The evidence for this claim was a link to the seven-day trend view for the search term "change my vote." The Post linked to the live seven-day Google Trend view, making their reference for the claim link effectively useless because the graph is constantly updated with new data that overwrites the older records. To interrogate the Post's claim, we looked at the (lower resolution) archived data for the search term "change my vote" for the seven days preceding their first story: As evidence that the increase in "change my vote" searches stemmed from a desire to reconsider a Biden vote, the Post argued that searches about changing votes were "linked to searches for Hunter Biden.” While the data suggest that Hunter Biden was a "related topic," it is clear that the trend —  at this point in time — was driven by people asking Google if it was true that "change my vote" was trending. The top related queries to this search included the word "trending." A related topic was "Google Trends" itself. In other words, by the time the Post began writing about the purported trend of increased searches for "change my vote," that trend had already been overtaken by people asking Google if claims like the one made in the Oct. 24 Facebook post were true and not if or how they could actually change their vote.

A Google Trends view of the "change my vote" search from the day before the Post's first Hunter Biden expose to the day of their Oct. 26 story suggests that the Facebook post, not the Hunter Biden story and not the debate, likely drove the continuation of the trend: Trump's tweet followed the Post's first story. In the tweet, he claimed that the "change my vote" search was trending "since immediately after the second debate." A seven day graph of the "change my vote" search in Google Trends spanning the debate to Oct. 29 suggests, however, that any initial trend "immediately" following the debate, as claimed by Trump, is effectively zero.

Second, Trump makes the claim that this Google search "refers to changing it [the votes] to me." As discussed regarding the viral Facebook post, the Google Trends data do not touch on who would be changing their votes or to whom they would be given.

On Oct. 27, following Trump's tweet, the Post wrote a second story on the purported trend. The news hook, in this case, was that the president had tweeted about the "changing votes" claim. Unmentioned was the fact that the Post's own reporting likely drove the very Trump tweet they were covering. This most recent Post story included all the previous dubious assertions in one convenient paragraph:

The term “change my vote” registered a strong uptick on Google Trends on Oct. 24, the week after The Post published its exposé series about former Vice President Joe Biden’s alleged involvement in Hunter Biden’s business dealings in Ukraine and China, and continued climbing during the time of the final presidential debate between Trump and Joe Biden last week.

This description bears scant semblance to the data the Post purported to describe: Indeed, what the data demonstrate is that any "trend" in people looking to change their votes following the final presidential debate is virtually non-existent compared to the trends apparently driven by viral social media chatter, the New York Post's reporting, and Trump's tweeting on the topic.

For the record, however, the possibility that a person could change an early vote varies by state and by circumstance, and in many cases, may not be possible.