This Kayleigh McEnany Facebook Group Was Run from North Macedonia

Records show that the foreign-run Facebook group Kayleigh McEnany OFFICIAL had at least 456,000 members just weeks ahead of the 2020 U.S. presidential election. 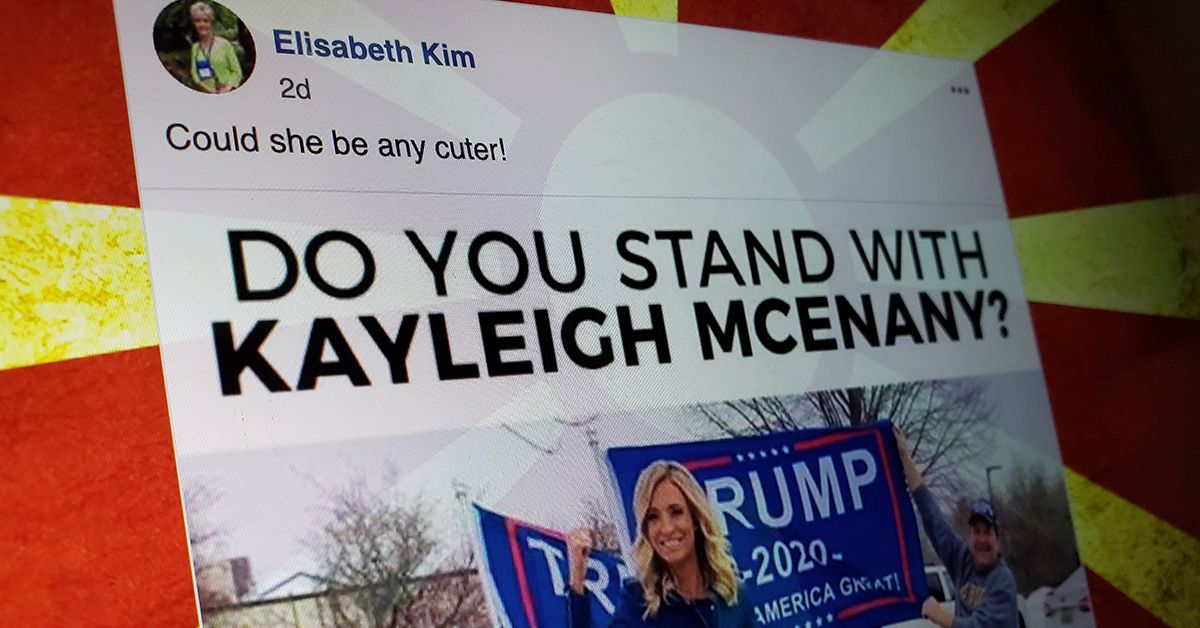 "Re-elect President Trump, take the House, strengthen our Senate ... November is coming. If you are ready to drain the swamp say 'YES I AM,'" another meme read, also posted on July 31.

A third meme posted on July 30 asked: "Do you stand with Kayleigh McEnany?"

These memes could be browsed in Kayleigh McEnany OFFICIAL, a Facebook group that appeared to be a gathering place for American fans of the White House press secretary. According to Google search results, at one point, its membership numbered well over 450,000.

But sometime between Aug. 1 and Aug. 21 of this year, the group disappeared.

Turns out, it was managed from North Macedonia.

In the run-up to Nov. 3 and beyond, Snopes' reporters are continuing efforts to uncover interference in the 2020 U.S. presidential election. This includes investigations into coordinated inauthentic behavior (CIB). We're also looking at individual pages, groups, and accounts that publish partisan American political content from outside the United States. In the 2016 U.S. presidential election, a number of countries were named in news reports as having people living within their borders who were involved in this kind of content.

As part of our research for this investigation, Snopes also noticed the following:

It's not clear for how long the Kayleigh McEnany OFFICIAL group was active, although a Bing archive of a now-defunct page called Conservative Train appears to show a man named Miki Jovanovski attempting to recruit the first 100 members to Kayleigh McEnany OFFICIAL in June 2020. The group's membership exploded over the following two months. At the same time, the U.S. was experiencing the aftermath of the killing of George Floyd, a Black man, while in police custody. Conspiracy theories also ran rampant on Facebook about racial justice, COVID-19, and a variety of other political subjects, all in the run-up to the election, perhaps sending partisans to their corners to become members in more Facebook groups that support their politics.

Kayleigh McEnany OFFICIAL was not an official group for the White House press secretary, nor is there any indication that she or the White House had any involvement with it. We reached out to Facebook to ask for information on the group's removal, and the company provided the following:

"We removed this Group in August 2020 as part of routine enforcement against spammy and inauthentic behavior because it used a range of deceptive techniques to boost their popularity on our platform. This Group was managed from North Macedonia and used compromised accounts to mislead people about its origin, make their content appear more popular that it is and drive them to off-platform domains filled with pay-per click ads and to YT."

The Facebook account named Miki Jovanovski was one of the admins in the Facebook group. His Facebook account was still active weeks after the group disappeared, although it disappeared soon after this story was published. A Google cache archive showed Jovanovski announcing in June: "Let's welcome our new members: THANK YOU ALL!!!" He also posted the same day asking for help with content moderation: "There have been a lot of people who comments against Kayleigh McEnany so because that i need a moderator anyone interested for that ?"

The Facebook account that posted the "Do you stand with Kayleigh McEnany?" meme also bears the name Elisabeth Kim. However, the woman pictured in the profile photo for Elisabeth Kim is wearing a name tag that says "Marti Jordan."

According to Google cache, Elisabeth Kim posted in July: "We did it! Let's show her how many more fans she has!," displaying an image celebrating 200,000 members. According to a Bing archive, the post was liked more than 10,000 times.

Another Facebook account bearing the name Rebecca Scott was seen in late July posting another membership milestone. The personal account for Rebecca Scott featured nine photos all posted January 30, 2020. Two were stock images of flowers, American flag clip art, and what appeared to be an obituary-style pet photo, among others. Eight of the nine images had no likes, comments, or shares. This post by Rebecca Scott included a special image with a banner explaining a goal to hit one million members by Election Day. It also urged current members to invite their friends, promising: "The bigger the party, the bigger the rewards!" The post did not specify what was meant by "rewards."

At press time, efforts to reach out to Miki Jovanovski, Elisabeth Kim, and Rebecca Scott via Facebook Messenger yielded no response.

Update on September 21, 2020: The profiles for at least two of the accounts described in this story have disappeared.