We looked into the criteria for a person to be nominated for a Nobel (not "Noble") Peace Prize. Turns out the bar is fairly low. 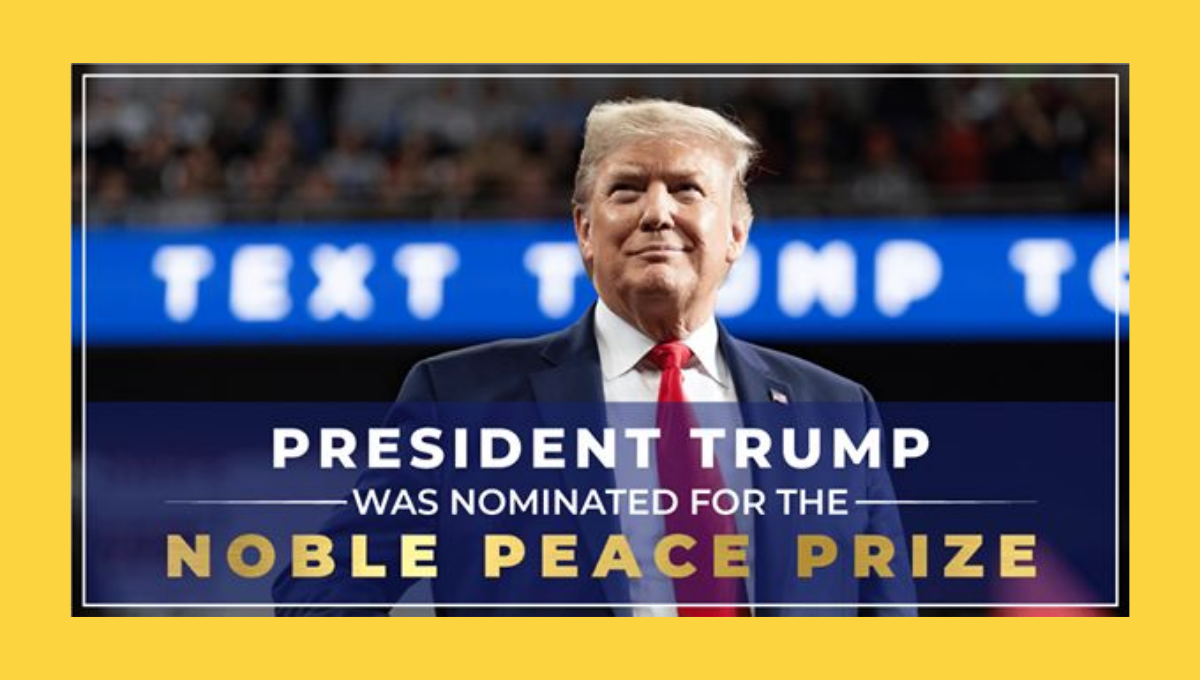 In September 2020, two members of parliament, in Sweden and Norway respectively, said they had nominated the U.S. government and President Donald Trump for the Nobel Peace Prize for 2021. Trump, his reelection campaign, and his supporters, cited the nominations as major accomplishments and points of pride. However, the rules and history of the nomination process suggest that simply having one's name put forward for a Nobel Peace Prize is not necessarily the honor or achievement that Trump and his backers have claimed.

On Sept. 9, 2020, Christian Tybring-Gjedde, a member of the Stortinget (Norway's national legislative assembly) from the right-wing Fremskrittspartiet (Progress Party), conducted an interview with Fox News in which he said he had nominated Trump for the Nobel Peace Prize on the basis of a U.S.-brokered agreement, signed in August 2020, to establish full diplomatic relations between Israel and the United Arab Emirates.

On Sept. 11, 2020, Magnus Jacobsson, a Kristdemokraterna (Christian Democrat) member of the Riksdag, Sweden's national legislative assembly, published a letter in which he proposed that the governments of the United States, Serbia, and Kosovo should jointly be awarded the next Nobel Peace Prize on the basis of a U.S.-brokered agreement to normalize economic relations between the two countries.

Kosovo had been internationally recognized as a province of Yugoslavia and later Serbia for many years but declared its independence in 2008. It is now recognized as a sovereign state by more than 100 other nations, including the United States but not Serbia.

Trump, his campaign, and his supporters touted the nominations in the days that followed. On Sept. 9, White House Press Secretary Kayleigh McEnany opened her press briefing with the announcement of Tybring-Gjedde's nomination, calling it "a hard-earned and well-deserved honor." The White House touted the nomination on Twitter and on its website, falsely describing Tybring-Gjedde as "chairman of the NATO Parliamentary Assembly" (that body doesn't have a chairman, but its president is Attila Mesterházy of Hungary. Tybring-Gjedde is chairman of Norway's delegation to the NATO Parliamentary Assembly).

At a rally in Minden, Nevada, on Sept. 12, Trump called the nominations "a big thing," saying that on Sept. 11 he had been "nominated a second time for another Nobel prize," a confusing formulation of words that muddled the fact that he was only nominated for one award, albeit by two different individuals. He touted the nomination again at a rally in Las Vegas on the following day, telling the crowd, "They nominated your president, twice last week, on two different subjects, for a Nobel prize."

Sean Hannity, Fox News host and one of the president's most prominent supporters, tweeted that in the space of "only one week," Trump had been "nominated for not one, but two Nobel Peace Prizes," the same oddly inaccurate phrasing used by the president himself.

Between Sept. 10 and Sept. 14, Trump and his campaign ran a combined total of 48 Facebook and Instagram ads touting the nominations as part of his reelection pitch to voters. Half of those ads contained a graphic with an unfortunate spelling error that read "President Trump was nominated for the Noble Peace Prize": Despite Trump's characterization of the nominations as a "big thing," the bar for being nominated for a Nobel Peace Prize is lower than many American voters might imagine, and the list of nominees is typically neither a short nor exclusive one. It has in the past even contained the names of some of the most reviled and controversial figures in 20th century history.

It should also be noted that the Nobel Foundation does not reveal the names of nominees or nominators for 50 years, so formally speaking, we can't yet say for certain that Tybring-Gjedde and Jacobsson did, in fact, nominate Trump for the prize for 2021. Tybring-Gjedde also claimed to have nominated Trump for the prize in 2018, and 2016 saw unconfirmed reports that an unnamed person had nominated the incoming president for that year's prize, as well.

In 2018, a senior official from the Norwegian Nobel Committee, the five-member body that makes the ultimate decision as to the recipient of the peace prize, confirmed that two separate nominations for Trump in 2017 and 2018 appeared to have been forged and that the matter was referred to the Oslo police and the Federal Bureau of Investigation.

'It’s Pretty Easy To Be Nominated'

According to the Nobel Foundation, the Swedish institution that administers the Nobel Prizes, a person cannot nominate himself/herself for the peace prize, and only living people and active organizations are valid candidates. The following categories of individual are qualified to nominate a person or entity for the peace prize:

Based on data collected by the Inter-Parliamentary Union, more than 46,000 individuals sit in national legislative assemblies throughout the world. Making a rough assumption of an average cabinet size of 20 members (based on existing research), and the 193 United Nations member states, the number of government ministers throughout the world would be around 3,800.

Based on U.S. Bureau of Labor statistics, there are around 170,000 post-secondary instructors in the academic subject areas specified by the Nobel Foundation in the U.S. alone. The worldwide figure is likely a multiple of that. In 2017, the higher education analytics firm Quacquarelli Symonds estimated that the number of universities worldwide was likely to be more than 40,000, so the "directors, rectors, and equivalents" from those institutions can also be added to the pool of nominators.

The total number of individuals eligible to nominate someone else for the Nobel Peace Prize is therefore likely to be greater than half a million, though this is only a rough estimate.

The number of nominations in a typical year is obviously only a small fraction of that figure, but still larger than many readers may have assumed. According to the organizers, 318 candidates were nominated for the Nobel Peace Prize in 2020 (211 of them individuals and 107 entities). The highest number of candidates came in 2016, when 376 individuals and organizations received nominations.

The Nobel prizes were funded and set up in accordance with the will of Alfred Nobel, the Swedish chemist and inventor of dynamite. He intended the peace prize to be awarded to "the person who has done the most or best to advance fellowship among nations, the abolition or reduction of standing armies, and the establishment and promotion of peace congresses."

However, as a result of the very large pool of potential nominators, representing a wide range of viewpoints and expertise, the list of peace prize nominees is not always composed of worthy individuals. In the past, even some of the 20th century's most controversial and reviled historical figures have managed to garner nominations, including:

In 2019, Olav Njolstad, secretary of the Norwegian Nobel Committee, summed up the dynamics of the nomination process, telling the AFP news agency: "There are so many people who have the right to nominate a candidate that it’s not very complicated to be nominated." Geir Lundestad, Njolstad's predecessor on the committee, added: "It’s pretty easy to be nominated. It’s much harder to win.”