Most of the whistleblower complaint dealt with general medical negligence at a Georgia facility, particularly around COVID-19. 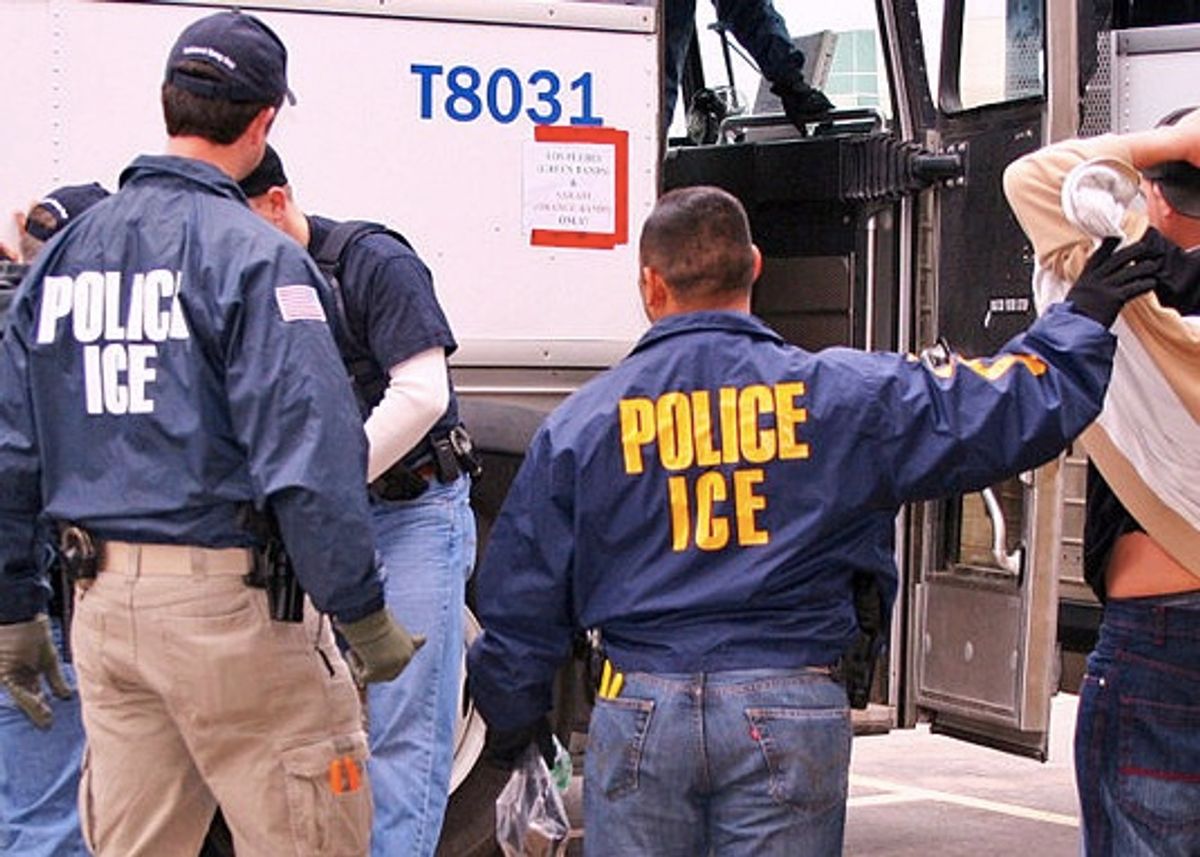 A whistleblower filed a scathing complaint in September alleging that immigrants held in custody at a private detention facility in Georgia contracted by U.S. Immigration and Customs Enforcement (ICE) feared for their lives due to negligent COVID-19 practices by facility staff. The allegations included reports of insects found in food and a large number of hysterectomies performed on detained women.

After the complaint was made public, stories went viral that focused on the portion of the complaint that alleged a high number of women had undergone hysterectomies without their consent. The story sparked outrage and comparisons to Nazi Germany.

However, the bulk of the 27-page whistleblower complaint filed on Sept. 14, 2020, by Project South — a social justice and legal advocacy organization — on behalf of Dawn Wooten, a practical nurse who works at Irwin County Detention Center (ICDC) in Ocilla, Georgia, deals with medical negligence and lack of testing and precautions against COVID-19 spread.

The complaint was submitted to the Department of Homeland Security's Office of Inspector General, which is responsible for oversight of DHS agencies, and seeks expedited review due to the "gravity of these violations and the continued negative impact on the health and safety of both detained immigrants and ICDC employees."

Immigrants interviewed by Project South said that because of this alleged negligence, they feared for their lives. Those who raised COVID-19-related health and safety concerns were retaliated against, per the complaint, and some have gone on hunger strike to be released, "or at the very least receive better protections against COVID-19 and be tested."

ICDC staff would retaliate against immigrants on hunger strike by shutting off their water supply, according to the complaint:

"Ms. Wooten confirmed that it was common practice for ICDC to shut off the water for those on hunger strike. Ms. Wooten stated that because of this policy, one detained immigrant was 'drinking out of the toilet. It’s what he had left.'"

We reached out to ICE for comment on these allegations. In a statement, agency spokeswoman Georgia Lindsey Williams said:

U.S. Immigration and Customs Enforcement (ICE) does not comment on matters presented to the Office of the Inspector General, which provides independent oversight and accountability within the U.S. Department of Homeland Security. ICE takes all allegations seriously and defers to the OIG regarding any potential investigation and/or results. That said, in general, anonymous, unproven allegations, made without any fact-checkable specifics, should be treated with the appropriate skepticism they deserve.

We also sent a detailed list of questions about the allegations to LaSalle Corrections, which operates ICDC, but haven't yet received a response.

The complaint states a lack of diagnostic testing exists for COVID-19 at the facility, and that detained immigrants have been transferred in and out of the facility without regard for whether they are infected or have been tested. It also states that immigrants don't have the physical space to keep an appropriate amount of distance between themselves, and that medical staff downplay COVID-19 symptoms exhibited by detainees.

Even though ICE had purchased two COVID-19 rapid-testing machines at a cost to taxpayers of $14,000 each, Wooten alleged that the facility's medical staff wasn't trained to use them. The complaint states, "The ICDC’s Director of Nursing ... refused to put the machines out into use claiming that she did not want the employees testing each other."

Aside from COVID-19 concerns, Wooten and detained immigrants interviewed by Project South alleged an overall lack of medical care and cleanliness at the facility. They described instances of an insulin-dependent diabetic who didn't get medication one morning and became severely ill, and an HIV-positive man who couldn't get his medication for three weeks, or see a doctor.

The report recounts an instance in which two women sickened with COVID-19-like symptoms — one of which couldn't even get out of bed — were left in a unit with other women until the symptomatic women became sicker. Only then were they quarantined. When a third woman came down with similar symptoms, she was also left in the unit with other detainees, was not tested, and was told by a nurse she "just had allergies."

Immigrants also reported unsanitary conditions in the facility that included mold and insects in their food, with one immigrant stating that the food was "often spoiled" and that cockroaches and ants would get into it.

The complaint also recounts statements from Wooten and immigrant women who expressed concerns about women being sent to a gynecologist who performed what they described as a high number of hysterectomies on detainees — and that many of the women who received them didn't understand or consent to the procedure. This section of the report received the most widespread media attention, but also drew the strongest rebuttal from ICE.

The Project South complaint recounts the following commentary from a detained immigrant woman:

More recently, a detained immigrant told Project South that she talked to five different women detained at ICDC between October and December 2019 who had a hysterectomy done. When she talked to them about the surgery, the women “reacted confused when explaining why they had one done.” The woman told Project South that it was as though the women were “trying to tell themselves it’s going to be OK.” She further said: “When I met all these women who had had surgeries, I thought this was like an experimental concentration camp. It was like they’re experimenting with our bodies."

The complaint also quotes Wooten talking about the gynecologist:

We’ve questioned among ourselves like, goodness, he’s taking everybody’s stuff out. That’s his specialty, he’s the uterus collector. I know that’s ugly … is he collecting these things or something... Everybody he sees, he’s taking all their uteruses out or he’s taken their tubes out. What in the world.

The accusations will be fully investigated by an independent office, however, ICE vehemently disputes the implication that detainees are used for experimental medical procedures. ICE’s mission is to protect the homeland and to swiftly and quickly remove people from the country; the health, welfare and safety of ICE detainees is one of the agency’s highest priorities, any assertion or claim to the contrary is false and intentionally misleading.

All female ICE detainees receive routine, age-appropriate gynecological and obstetrical health care, consistent with recognized community guidelines for women’s health services. According to U.S. Immigration and Enforcement (ICE) data, since 2018, only two individuals at Irwin County Detention Center were referred to certified, credentialed medical professionals at gynecological and obstetrical health care facilities for hysterectomies in compliance with National Commission on Correctional Health Care (NCCHC) standards. Based on their evaluations, these specialists recommended hysterectomies. These recommendations were reviewed by the facility clinical authority and approved.

The agency said multiple stages to the approval process exist before such a surgery would be performed on an ICE detainee, including approval by a regional clinical director and consent from the patient.

According to the complaint, Wooten said she herself was retaliated against for taking time off from work to quarantine after coming down with what she feared were COVID-19 symptoms. Wooten was demoted from working full-time hours to PRN status, meaning filling in as needed.

We reached out to Project South and the Government Accountability Project, the government watchdog organization representing Wooten, but didn't hear back in time for publication.

After stories about the complaint went viral, Government Accountability Project took to Twitter to report that a fake account impersonating Wooten had been created. The account has since been suspended.

Days after the contents of the complaint were made public, news reports linked Georgia-based gynecologist Dr. Mahendra Amin to the allegations of performing unwanted hysterectomies on detained immigrant women. Scott Grubman, Amin's attorney, said in a statement that the doctor "vehemently" denied allegations relating to him:

Importantly, according to the Washington Post, one of the whistleblower's attorneys expressly acknowledged that she did not speak to any of the women directly and that she "included the allegations in the report with the intention of triggering an investigation into whether or not the claims were true."

We look forward to all of the facts coming out and are confident that, once they do, Dr. Amin will be cleared of any wrongdoing.

It's true that Project South attorney Priyanka Bhatt told the Washington Post that she didn't personally interview any women at the detention facility who stated they had received a hysterectomy. She included the information in the complaint because, "When investigating human rights abuses, we conduct extensive interviews with immigrants, and our job is to report what they tell us."

Bhatt told the Post that by including the information, she hoped to obtain further information about the allegations. Bhatt didn't respond to an email from Snopes seeking an interview.

A follow-up review of medical records by the Associated Press didn't show evidence for claims of "mass hysterectomies," as was originally reported by some outlets. Instead, the AP found "growing allegations that Amin performed surgeries and other procedures on detained immigrants that they never sought or didn’t fully understand."

One such case was Pauline Binam, who has been detained at ICDC since 2017 and was nearly deported while news stories about the whistleblower complaint were swirling. Her deportation was halted with U.S. Reps. Pramila Jayapal, D-Washington, and Sheila Jackson Lee, D-Texas, intervened.

After agreeing to a minor surgical procedure in August 2019 to correct irregular menstrual bleeding, Binam, 30, reportedly woke up from anesthesia and was told by medical staff that one of her fallopian tubes had been removed, which would make future conception difficult.

The recent allegations by the independent contracted employee raise some very serious concerns that deserve to be investigated quickly and thoroughly. ICE welcomes the efforts of both the Office of Inspector General as well as the Department of Homeland Security’s parallel review. As a former prosecutor, individuals found to have violated our policies and procedures should be held accountable. If there is any truth to these allegations, it is my commitment to make the corrections necessary to ensure we continue to prioritize the health, welfare and safety of ICE detainees.”

Project South. "Re: Lack of Medical Care, Unsafe Work Practices, and Absence of Adequate Protection Against COVID-19 for Detained Immigrants and Employees Alike at the Irwin County Detention Center."   14 September 2020.

Narea, Nicole. "A Woman in ICE Detention Says Her Fallopian Tube Was Removed Without Her Consent."   Vox. 17 September 2020.

Update to include further information regarding allegations and a statement from the attorney representing the doctor referenced in the whistleblower complaint.