Sorting fact from fiction, fast as we can. 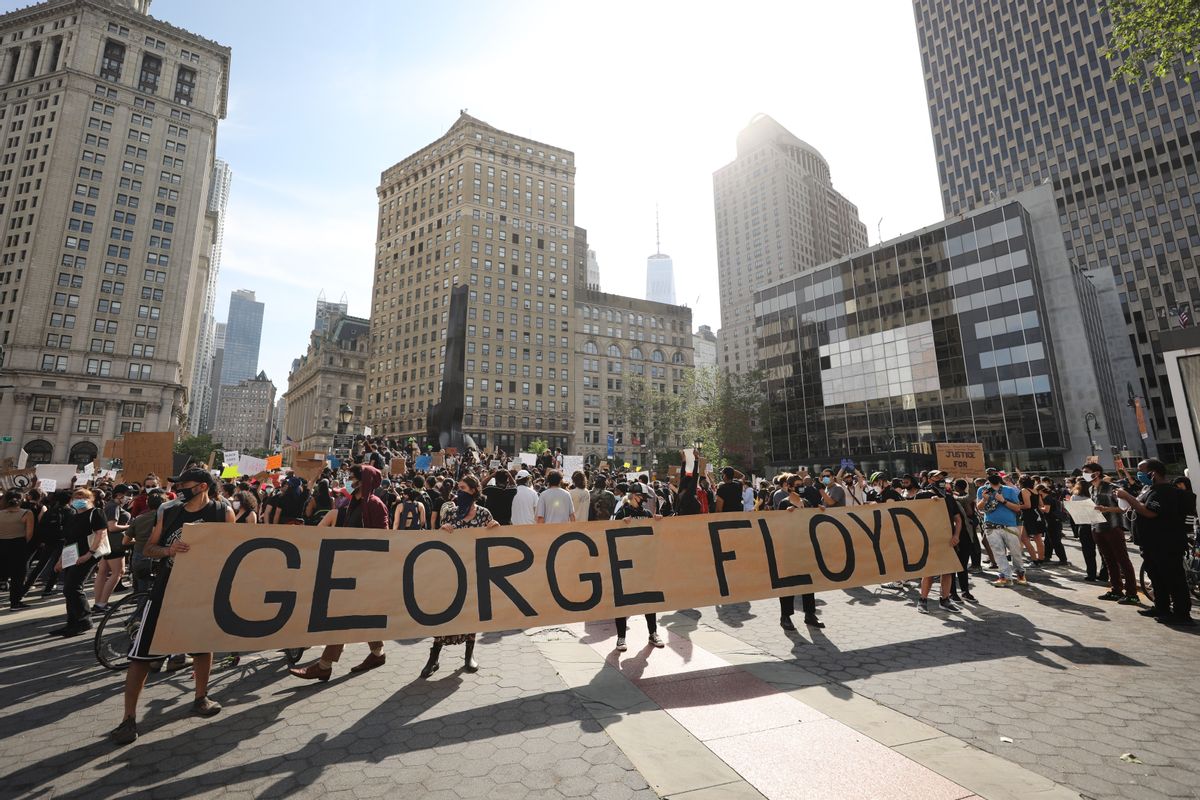 For days following the death of George Floyd, an African-American man who was killed on May 25, 2020, after a Minneapolis police officer kneeled on his neck, thousands of people in cities across the United States took to the streets to protest. Many demonstrations were peaceful, but reports of looting, vandalism, and violence were also prevalent. As images and stories of the protests flooded the internet, so did countless hoaxes and unfounded rumors.

In an effort to tackle more rumors more quickly, we are updating this list with "fast" fact checks, in addition to our other coverage here. See a rumor? Send us a tip.

Did Bill Clinton Hold Up a Bible at the ‘Exact Same Church’ That Trump Did? This photograph from 2000 is real, but it was not taken at the “exact same church” where U.S. President Donald Trump was photographed holding a bible in June 2020. It was actually taken a few blocks away from St. John's Episcopal Church, where the Trump photo (see below) was taken, at the Foundry United Methodist Church.

Did the Amish, Witches Join the 2020 Protests? Both of these images are real, but the photograph of “witches” is several years old and “Amish” does not accurately describe the group on the right.

The image on the left was taken in August 2017 and shows a group of counter-protesters at a far-right “Free Speech Rally” in Boston. The original photograph can be found on Getty Images. The image on the right is real and recent, but this image actually shows members of the anti-denominational Church of God.

The group wrote on Facebook: “We're onsite in Minneapolis, sharing the message of God's love to a hurting community. We're not #Amish, of course, but we are part of the one human family and we must stand together against oppression.”

Does This Image Show All The Lights Out at the White House During Protests? No, this is an old and edited image.

On May 31, 2020, as protesters gathered in front of the White House, multiple news outlets reported that the lights at the White House had been turned off and that U.S. President Donald Trump was taken to a bunker for safety. As social media users shared these reports, the above-displayed image supposedly showing the darkened White House went viral. This image, however, is actually an edited version of a photograph taken in 2014.

Here’s the edited image (left) and the original photograph (right):

A genuine image of the White House during this protest can be seen here. While most of the lights are off, the portico lantern above the main entrance was still lit.

Is This a Genuine Image of President Trump and First Lady Melania at Church? Yes, this photograph was shared to First Lady Melania Trump’s Facebook page along with the caption: .@POTUS & I honored the life & legacy of Saint John Paul II at @JP2Shrine today. His passion & dedication for religious freedom is a legacy that we must protect for people around the world.”

While this image later trended on Twitter attached to jokes about the horror movie “The Omen,” D.C. Archbishop Wilton D. Gregory offered a more serious criticism of the President’s visit to the Saint John Paul II National Shrine:

I find it baffling and reprehensible that any Catholic facility would allow itself to be so egregiously misused and manipulated in a fashion that violates our religious principles, which call us to defend the rights of all people even those with whom we might disagree. Saint Pope John Paul II was an ardent defender of the rights and dignity of human beings.  His legacy bears vivid witness to that truth. He certainly would not condone the use of tear gas and other deterrents to silence, scatter or intimidate them for a photo opportunity in front of a place of worship and peace.

Are These Images of Rubber Bullets? Yes, these are pictures shared by protesters and reporters of rubber bullets that were fired by law enforcement. The image on the right was shared by Jintak Han, a senior staff photographer for UCLA's student newspaper the Daily Bruin. The other image was shared by TV host Tamara Dhia. Similar images have also been posted by news reporters.

Were Protests Held in All 50 States? Yes, the above-displayed screenshot comes from a segment that aired on CNN on June 1, 2020. Although we have not been able to find a publicly available clip of this segment, a transcript from CNN reads:

Check out this map. Not a coronavirus map. This unrest, like the virus now found in all 50 states. Many protests peaceful, but many anything but savvy. Police squaring off with citizens. The pictures have been inspiring and troubling at the same time.

USA Today is also tracking the protests and reported that “there have been over 300 protests so far, large and small, across all 50 states.”

Is This a Real Video of Protesters on Horseback?

Yes, although this group is not the "Rohirrim," a reference to a kingdom of horsemen from J. R. R. Tolkien's "The Lord of the Rings." This video actually shows the Non-Stop Riders, an urban trail riding club, arriving at a protest in Houston, Texas.

Marcus Johnson, of Houston’s Fifth Ward, raised his fist in the air. “We’re here representing for all our black brothers and sisters," he said.

The mounted protesters planned to join thousands more on foot as they made their way from Discovery Green, a public park, to City Hall.

Is Dwight Eisenhower the Leader of Antifa? This is an obvious joke as the man featured in this tweet is late U.S. President Dwight D. Eisenhower, who was a general in the United States military during World War II, and who passed away in 1969. As such, Eisenhower is not currently "wanted" for leading antifa (short for anti-fascist) activities.

Although we don't know how Eisenhower would view modern day Antifa activity, Schwartz is pointing out that Eisenhower, who led the fight against Nazis during World War II, could be aptly described as an "anti-fascist."

Did Justin Timberlake Say He Would Bail Out Protesters? Mostly true. The musician said that he was donating to the Minnesota Freedom Fund, a non-profit organization that is raising money to fund bail for protesters, and encouraged others to do the same.

Timberlake's tweet can be seen here. Several other celebrities, such as Don Cheadle, Seth Rogen, Steve Carell, and Chrissy Teagan have made similar statements.

Yes, hackers jammed Chicago radios during protests at the start of June 2020. The group "anonymous" claimed responsibility for the action and Chicago police said that they heard everything from pro-cop slogans to anti-cop music, such as the NWA song "Fuck the Police."

Hackers interrupted Chicago’s police radio system over the weekend with everything from anti-cop music to pro-police slogans as dispatchers struggled to answer calls during the looting and gun violence.

Chicago police officers who worked over the weekend said they also heard the late ’80s hip-hop song “F--- tha Police” by N.W.A. on their radios.

Did President Trump Hold the Bible Upside Down? No. Shortly after law enforcement forcibly removed peaceful protesters from an area in front of St. John's Church on June 1, 2020, U.S. President Donald Trump walked over from the White House to take photographs holding a bible. While many took to Twitter to criticize the use of force on protesters for a photo-op, some incorrectly claimed that the president was holding the bible upside down.

Video of the event shows Trump somewhat awkwardly fumbling with the bible, but photographs from Getty Images and The Associated Press show that Trump was holding this bible the right way up when he was photographed:

Does Video Show a Large Solidarity Protest in Amsterdam Against Racism?

Yes, there have been protests in cities around the world against police brutality and racial injustice in the days following George Floyd's death. The above-displayed video was taken at one such protest in Amsterdam. Reuters reports:

Thousands of protesters chanting “I can’t breathe” gathered in central Amsterdam on Monday in solidarity with George Floyd, a black American who died in police custody in the United States last week.

Yes, these are genuine screenshots from Toews' Instagram. The hockey player posted this message in response to a viral video showing three black man expressing their frustrations with racial injustice.