The convicted pedophile's infamous contact book contained the names of approximately 1,000 people, many of whom were well-known public officials. 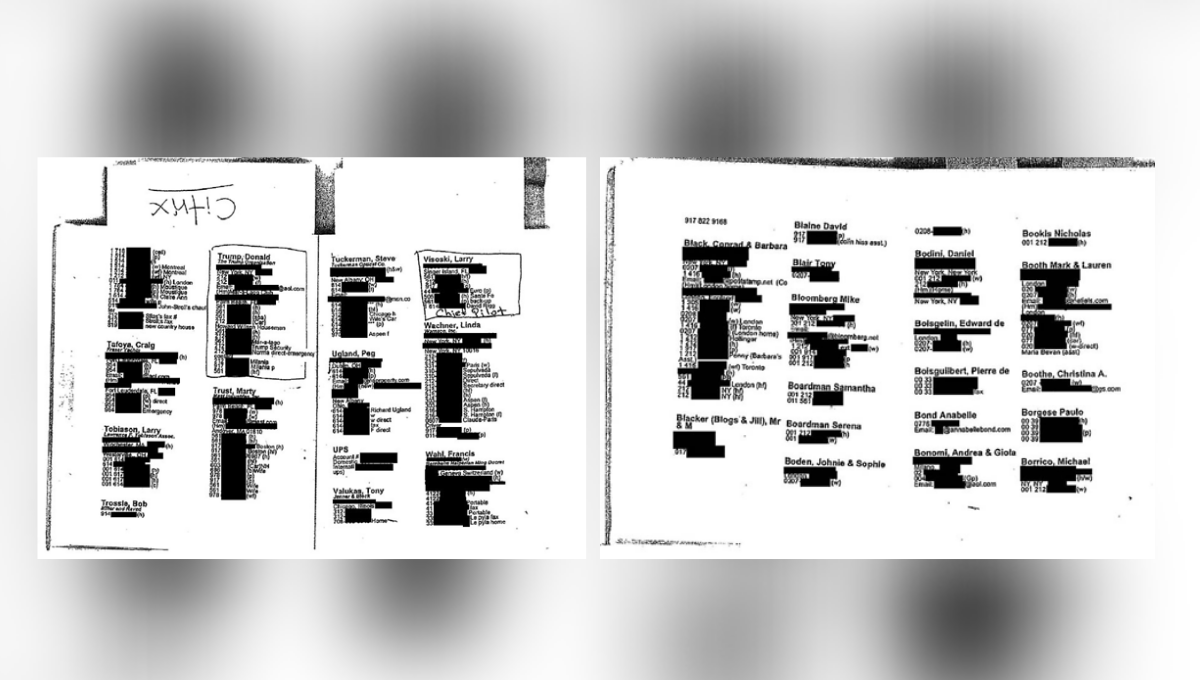 In February 2020, a picture supposedly showing 2020 Democratic presidential candidate Michael Bloomberg's contact information in convicted pedophile Jeffrey Epstein's "black book" was widely spread on social media, along with claims and questions about Bloomberg's relationship with Epstein. Some readers countered that another politician in the 2020 election, U.S. President Donald Trump, was also listed in the book.

We'll look at what Epstein's "black book" actually is, what it means to be listed in this book, and whether the pictures of Bloomberg's and Trump's contact information are real.

What is Epstein's "black book?"

In short: The "black book" refers to billionaire Epstein's contact book. This book contained the contact information of about 1,000 people and businesses, many of whom were well-known public figures.

Before he was found dead in his jail cell, Epstein was an American financier who was arrested and convicted on various charges relating to the sexual abuse of minors between 2005 and 2019. At the time of his death on Aug. 10, 2019, Epstein was awaiting trial to face new charges of sex trafficking.

In addition to being a convicted pedophile, Epstein had a wide social network that included many prominent public figures. This raised questions about who knew about Epstein's activities and, worse, who may have been involved. One piece of evidence used to gain insight into Epstein's social life: a book listing phone numbers and email addresses of approximately 1,000 people and business.

This contact book was described as a "small bound book" in a 2009 FBI affidavit. Investigative journalist Nick Bryant obtained a copy of the book in 2012 and it was published in full to the internet a few years later in a Gawker article.

Here's an excerpt from a 2015 Vanity Fair report about Bryant's investigation:

Bryant first got his hands on a copy of the black book in 2012, after the feds caught Epstein’s former house manager trying to peddle it for $50,000. At the time, Bryant was shopping a feature on Epstein, without success. “My Epstein article would focus on the government malfeasance that enabled Epstein to skate on scores of child abuse charges,” Bryant wrote in a pitch he submitted to various editors, “and I would also look into covert ties that the government may have had with Epstein. Moreover, the little black book opens up multiple vistas of investigation, and I would attempt to amass sufficient corroboration on some of the power broker perps who molested these girls.”

Three years later, when Epstein was back in the news due to fresh allegations that his pal Prince Andrew had slept with one of the girls who’d alleged she’d been trafficked by Epstein (Buckingham Palace denies this), Bryant finally published the black book in full (phone numbers redacted) in a Gawker article. In particular, the article called attention to a bunch of names that Epstein’s former house manager (who passed in late 2014) had circled, supposedly to identify them as potential “material witnesses.”

Does everyone in the book have a connection to Epstein?

In short: No. Several people mentioned in this book have said that they never met Epstein. Some of the names have also been described as people Epstein would have liked to have met.

While Epstein's black book certainly gives some insight into his social connections, these contacts have also been described as "aspirational." In other words, not everyone listed in this book was an associate of Epstein's. Some names in the book were people Epstein "aspired" to connect with.

Alfredo Rodriguez, the former house manager of Epstein, told The New York Times that Epstein's staff actually compiled the book. The New York Times also talked to several people mentioned in the book who said that they had never actually met Epstein.

Andrew Rosen, the founder of Theory and owner of numerous racehorses, said he didn’t know him and had never met him. Mr. Rosen couldn’t recall ever attending an event he hosted or crossing his path.

Charles Finch, the film producer, brand builder and bon vivant, didn’t know him, either. Vanessa von Bismarck, the glamorous founder of a namesake fashion PR company? She had no idea why her name came up. Nor did Joan Juliet Buck, the former editor of French Vogue.

“As far as I know, I never met Epstein,” Ms. Buck said. “I never went to any of those famous parties at the biggest house in New York City.”

A report by New York magazine about those who appear in Mr. Epstein’s book declares that the list creates a portrait of a man “deeply enmeshed in the highest social circles.” The names in the book, though, are as likely to be a map of aspirational connections, as well as actual ones.

Because according to Mr. Rodriguez’s statement in the affidavit, the book was compiled by employees of Mr. Epstein, not by Mr. Epstein himself. Those contacted for this article acknowledged having met Ghislaine Maxwell, Mr. Epstein’s former girlfriend and “lady of the house,” and posited perhaps that was how their names ended up in the book. (It is unclear from the affidavit whether Ms. Maxwell is one of the “employees.” Ms. Buck said that she had met Ms. Maxwell at a boutique opening but that “she never phoned me.”)

Was Bloomberg listed in Epstein's book?

In short: Yes. The name "Michael Bloomberg" appears in Epstein's contact book, along with telephone numbers and an email address.

The image supposedly showing Bloomberg's contact information in Epstein's black book is genuine. A screenshot of this listing appears below, but you can also view it on page 6 in a digital copy of this book. As we previously noted, being listed in this book is not proof of being associated with Epstein, nor does it imply that someone was involved in his crimes.

A spokesperson for Bloomberg's campaign told us that the former mayor of New York City "had no relationship with Jeffrey Epstein" and that "we obviously have no idea about his black book."

So how did Bloomberg end up in this book? While we can't say for certain, it may relate to Maxwell, as other contacts in this book alleged to The New York Times. Bloomberg and Maxwell have been photographed together at least once. But, as we noted in our article about that photograph, this isn't as "strange" or "suspicious" as some conspiracy theorists would have you believe. Maxwell is a British socialite who has been pictured with countless celebrities and public officials, and Bloomberg, a former mayor, frequently attends public events.

The FBI has opened an investigation into Maxwell for her alleged connections to Epstein's activities. Taking a photograph with a person, however, does not automatically implicate one in that person's crimes.

In short: Yes. Trump's name appears in Epstein's book, along with several phone numbers and email addresses. Ivana, Ivanka, Robert, and Blaine Trump are also mentioned in the book. The contact information for Donald Trump was also circled.

A screenshot of Trump's redacted contact information can be seen below and also on page 80 of the digital copy. As we noted above, being listed in this book is not proof of any association, nor does it implicate Trump in Epstein's crimes.

It should be noted, however, that Trump did have a relationship with Epstein. In a 2002 article, Trump called Epstein a "terrific guy" and added that "he’s a lot of fun to be with. It is even said that he likes beautiful women as much as I do, and many of them are on the younger side." Trump has also been photographed and filmed hanging out with Epstein at social events.

Trump would later distance himself from Epstein, saying that while the convicted pedophile was a "fixture' in Palm Beach, he was "not a fan."

Who else is in Epstein's black book?

Epstein's "black book" contains the names of dozens of well-known public figures that vary from entertainers, such as musician Courtney Love, to members of the royal family, such as Prince Andrew, to media moguls, such as Rupert Murdoch. Former U.S. President Bill Clinton was also mentioned on the flight logs for Epstein's plane.

New York magazine went through all of the contacts in Epstein's black book and detailed each person's alleged relationship with the convicted pedophile.

Pompeo, Joe.   "A Lot of Powerful People... Could go Down.' The Journalist Who Published Jeffrey Epstein's Black Book and Jet Passenger Logs Comes in From the Fringe."     Vanity Fair.   18 July 2019.

A previous version of this story mistakenly used "Robert Murdoch" where "Rupert Murdoch" should have appeared.