A People's Daily video claiming to show "full-front disinfection work" in Wuhan included footage taken at an airport in Taiwan. 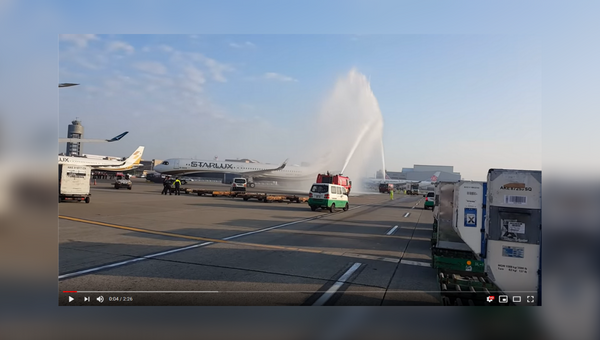 Amid increasing international scrutiny of the Chinese government's management of the new coronavirus outbreak in February 2020, an official Chinese Communist Party newspaper wrongly pointed to footage of a water salute for a new airline as an illustration of the state's efforts to contain the spread of the disease.

On Feb. 10, People's Daily, the official newspaper of the party which has ruled in China since 1949, posted a video montage to Twitter, Facebook and YouTube, which claimed to show "full-front disinfection work" under way in the city of Wuhan, the epicenter of the outbreak:

If the video was intended to assure English-speaking viewers that China's official state media could be relied upon to provide accurate information about official efforts to contain the coronavirus outbreak, which was declared a "global health emergency" in January 2020, then it might well ultimately have the opposite effect.

The last of the five clips contained in the video bears no relation whatsoever to disease control, and its inclusion in the montage unavoidably casts doubt on the credibility of the remaining four segments, as well as a similar "disinfection" montage published on Feb. 9 by the Global Times, another Chinese Communist Party-run newspaper. The final segment of the People's Daily montage shows a grounded airplane moving between two jets of water at an unspecified airport. However, rather than being an illustration of China's disinfection strategy, it actually shows a ceremonial water salute for the maiden voyage of the recently launched Taiwanese airline Starlux.

The water salute is a time-honored ritual in aeronautics, typically performed for a retiring pilot's final flight, the final flight of a route that is about to close, or the maiden voyage of a new airplane or airline, according to the Aerotime website.

A YouTube video posted on Jan. 22 described the water salute as marking the airline's "first flight to Macau" — the Chinese-owned island territory which is a popular gambling resort and one of five locations served by Starlux, along with Taiwan, Malaysia, the Philippines, and Vietnam. It is clearly the original source of the footage included in the People's Daily "disinfection" montage:

The video montage contained other inconsistencies. For example, the first clip showed a fleet of trucks using mist cannons to deploy a spray of some kind along an empty street: However, contrary to People's Daily's description of the montage as showing disinfection work being carried out in Wuhan, that particular clip was actually recorded in the city of Luoyang, around 350 miles farther north. The architecture shown in a similar video published by New China TV (the state-owned Xinhua news agency) makes it clear that Luoyang, and not Wuhan, was the filming location for the first clip in the People's Daily montage:

The provenance of the remaining three clips is not clear. Snopes asked People's Daily to provide detailed descriptions of each of the videos, as well as sources, but we did not receive a response.

We also asked the newspaper how or why the Starlux water salute had been erroneously cited as an example of Chinese efforts to combat the spread of coronavirus, and why a video taken in Luoyang had been incorrectly described as showing the city of Wuhan, but we didn't get a response to those questions either.