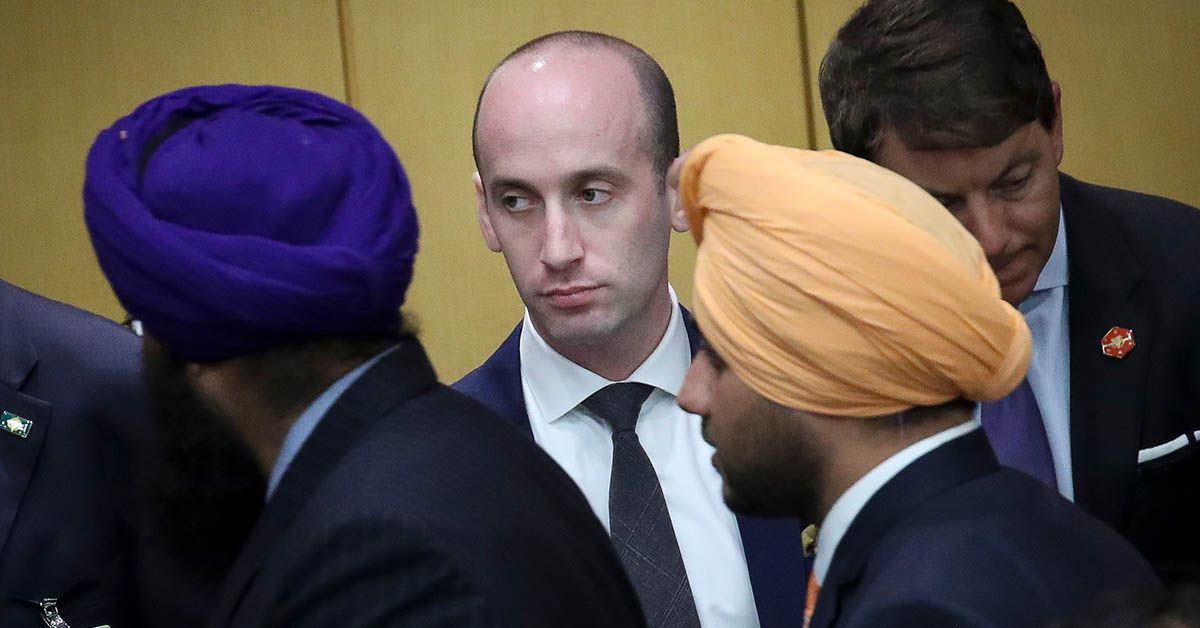 The story hit the internet like a Mack Truck. On Nov. 12, 2019, the civil rights, non-profit organization Southern Poverty Law Center (SPLC) reported it had a trove of email correspondence between White House adviser Stephen Miller and a former Breitbart writer, in which Miller promoted literature and views aligned with those of white supremacists.

The story by the SPLC's publication "Hatewatch" has ricocheted across the news media, prompting Democratic members of Congress to call for the resignation of Miller, who has helped shape many of the immigration policies of President Donald Trump's administration. In statements to various news organizations, spokespeople for the White House have attacked the SPLC's reputation, calling it "an utterly-discredited, long-debunked far-left smear organization." They have insinuated the report is an attack on Miller because he is Jewish. But the White House has not directly addressed the emails themselves.

We sent the White House a list of questions about the SPLC's report, about the content of Miller's emails, and about how that content relates to the Trump administration's policies. We received no response.

"These are his [Miller's] emails," said SPLC investigative reporter Michael Edison Hayden, who broke the story. "This is what he reads and what he believes."

Hayden said he has close to 1,000 emails exchanged between Miller and Katie McHugh, the former writer at the conservative Breitbart and self-professed reformed racist. The emails were sent from Miller's official account when Miller was an aide to then-U.S. Sen. Jeff Sessions, R-Ala., in the run-up to the 2016 presidential election. Most of the emails were sent before Miller joined the Trump campaign in January 2016.

"Hatewatch" reported that McHugh was introduced to Miller in 2015 "with an understanding he would influence the direction of her reporting." (Kurt Bardella, who once worked as Breitbart's spokesman but is now a vocal critic of Trump, told The New York Times that Miller was "almost a de facto assignment editor for the political writing team at Breitbart.")

In his emails, according to "Hatewatch," Miller focused on "offenses committed by nonwhites. On immigration, he touches solely on the perspective of severely limiting or ending nonwhite immigration to the United States. Hatewatch was unable to find any examples of Miller writing sympathetically or even in neutral tones about any person who is nonwhite or foreign-born."

Miller also "obsessed" over the removal of Confederate statues after Dylann Roof gunned down nine worshipers at the Emanuel African Methodist Episcopal Church in Charleston, South Carolina, in June 2015. And Miller promoted links to white supremacist websites including VDARE and American Renaissance, Hayden found, as well as a novel popular among white supremacists:

Miller recommended in a Sept. 6, 2015, email that Breitbart write about “The Camp of the Saints,” a racist French novel by Jean Raspail. Notably, “The Camp of the Saints” is popular among white nationalists and neo-Nazis because of the degree to which it fictionalizes the “white genocide” or “great replacement” myth into a violent and sexualized story about refugees.

In one email published by "Hatewatch," Miller in 2015 railed against Temporary Protected Status (TPS), a policy that allows some foreign nationals to stay in the U.S. due to dangerous conditions in their home countries. Miller pushed McHugh to write how Hurricane Patricia could lead to Mexican citizens fleeing the storm's destruction for the U.S. Miller sent McHugh a VDARE article penned by Steve Sailer, a white supremacist who traffics in pseudoscience that claims some ethnicities are less intelligent and more prone to crime, with the commentary, "That needs to be the weekend's BIG story. TPS is everything."

In other emails exchanged between Miller and McHugh, Miller pushed McHugh to write stories about crimes committed by non-white people and immigrants. "Let me know when you can talk re: immigrant crime. Have some thoughts," Miller wrote in 2015. He forwarded McHugh a story published on the conspiracy-trolling InfoWars website promoting a cessation of Muslim immigrants to the U.S. Hayden reported:

Miller refers to President Calvin Coolidge multiple times in emails to Breitbart. Coolidge signed the Immigration Act of 1924. The legislation was based on eugenics and severely limited immigration from certain parts of the world into the United States. White nationalists lionize Coolidge, in part for his remarks condemning race mixing.

The significance of the content of Miller's emails is global, Hayden told us, in that "The policies he’s enacting [in the Trump administration] very clearly mirror the type of reading material he takes in."

Indeed, with Miller influencing immigration policy, the Trump administration has ended TPS protection for hundreds of thousands of immigrants living in the U.S. Perhaps most infamously, the Trump administration enacted "zero tolerance," a policy in which families were targeted at the border by immigration authorities, and thousands of children were separated from their parents and placed in detention.

The Trump administration has also made it more difficult for people to obtain asylum in the U.S. and has drastically reduced the cap on the number of refugees allowed into the country to a record low. And the Trump administration enacted a watered-down version of what was initially promoted as a "Muslim ban" after Trump promised on the campaign trail a "total and complete shutdown of Muslims entering the United States."

Hayden's report coincided with news that a record 70,000 immigrant children had been held in detention by U.S. immigration authorities in fiscal year 2019. After a decade of no children dying in immigration detention, at least seven died during that same time period.

"Someone in one of the highest offices of the most powerful country in the world is reading material that suggests they believe that people of Latin descent have lower IQs," Hayden told us. "This is debunked fiction that we thought we moved passed over 100 years ago. How many people who live in this country have to know their tax dollars are going to somebody who believes their race makes them predisposed to having a lower IQ?"

Hayden told us he sent questions addressed directly to Miller seeking comment for his story and also did not receive a response.