Did GOP Send Out a 'Fake Census' Asking for Campaign Donations?

The RNC has been mailing out fundraising forms disguised as "census" surveys for years. 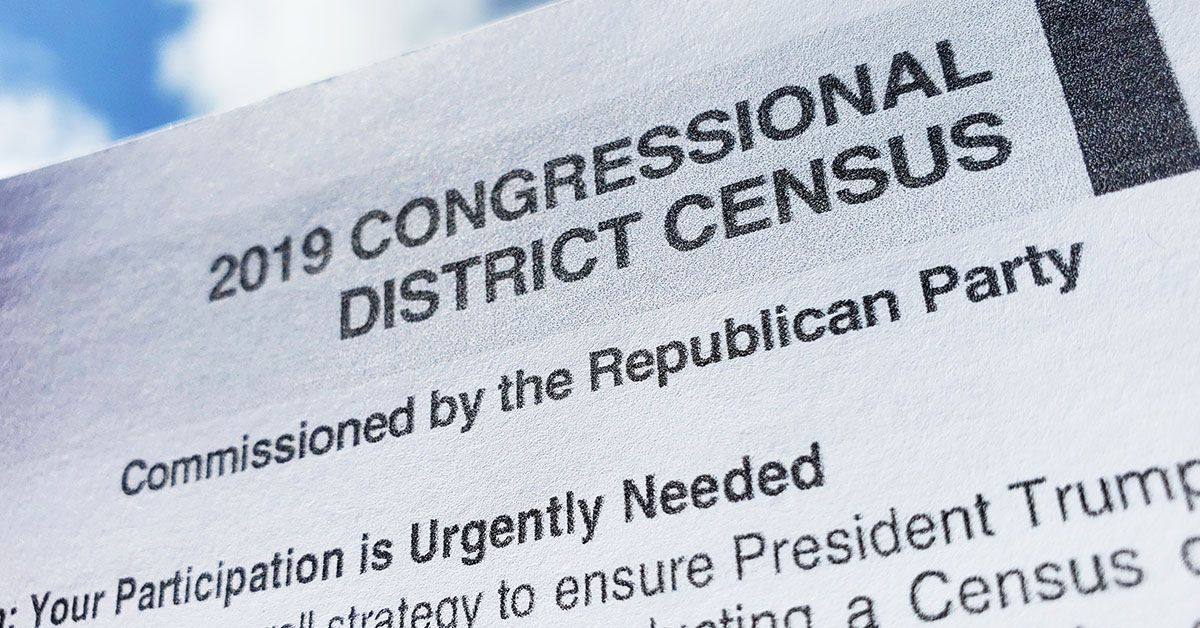 Democratic members of the U.S. Congress have asked the U.S. postmaster general to investigate a campaign mailer sent out by the Republican National Committee (RNC) "that [appears] to come from the US Census Bureau."

The 9 May 2019 letter sent by U.S. Reps. Carolyn Maloney, Lacy Clay, and Frank Pallone to Megan Brennan, head of the U.S. Postal Service, accuses the RNC of sending out an "illegal attempt to mislead the American people and capitalize on the good work and reputation of the US Census Bureau for political purposes, a clear violation of the Deceptive Mail Prevention and Enforcement Act."

The letter reads (in part):

The mailing in question is designed to resemble official census documents and to deceive recipients using phrases such as “DO NOT DESTROY” and “OFFICIAL DOCUMENT” on the exterior of the envelope. Further, it is labeled as the “2019 Congressional District Census” and lists a date for recipients to respond by. These characteristics are unique to real census documents and are, at best, a deceitful attempt to coerce responses for political purposes.

We sent email to the postmaster general asking for comment but had received no response by the time of publication.

The document in question was sent out in early 2019, and one of the recipients was San Diego resident Chris Kiser's mother. Kiser posted images of the mailing on Twitter, and the tweet went viral, prompting our readers to inquire as to whether the GOP was sending out a "fake Census":

#BreakingNews
My mother recieved a "Congressional Census" in the mail that was pro Trump from the @RNC @GOP. When I called the number listed below they told me that my mother had to fill this out and send it in with a $15 processing fee. pic.twitter.com/L2cDvAudNE

Even on the envelope it says do not destroy official document. pic.twitter.com/Ey7zKPUk8v

Kiser told us his mother, a 66-year-old cancer patient on a fixed income who is undergoing intensive treatment, was led to believe that filling out the form was mandatory, as was paying the $15 "processing fee." His mother, Kiser said, thought she had received an actual Census questionnaire, and due to poor eyesight she could not read small-print disclosures on the form.

"On the outside [of the envelope] it should be clearly marked as a political party mailer," Kiser told us. "Something that identifies that this is not an official form, it’s a political party communication. If you're going to fish for donations, at least give people a heads up."

We sent questions to the RNC about the mailer but didn't receive answers to them; instead we were instead sent the following statement:

"This type of clearly marked mailer has been utilized by both parties for years. The package as a whole looks nothing like the U.S. Census and is clearly a fundraising solicitation paid for by the Republican National Committee.”

It is true that isn't the first time a political party has sent out a fundraising mailer disguised as a survey. In 2018, the Democratic party attracted negative attention for mailing a survey that was really a fundraiser. The practice is so common, the Baltimore Sun reported, that there's a name for it: Fund-Raising Under the Guise of Research, or FRUGing.

"It’s using a survey to engage folks to think about issues in a way that would compel them to donate money. It’s common practice," Mileah Kromer, director of Goucher College’s Sarah T. Hughes Field Politics Center, told the Sun in 2018.

The RNC drew criticism as far back as 2010 for sending out a similar form, of which ProPublica reported at the time: "An editor here at ProPublica received this 'Census' form in the mail last week. In big, bold letters at the top it announces, '2010 CONGRESSIONAL DISTRICT CENSUS.' The form even has a 'Census Tracking Code.' But it's not from the Census Bureau."

"It made a big stir about 10 years ago, and [Congress] passed a law saying you can't pretend to be the Census and do a party mailing," said Patrick Meirick, associate professor of communication and director of the Political Communication Center at the University of Oklahoma. "It got some folks pretty riled up."

Political parties and interest groups often engage in the practice of sending fundraising mailers cloaked as surveys, but putting the word "Census" on the document "seems to be more of a Republican innovation," Meirick told us.

So why did the practice cause a stir in 2019? "It may be that social media helps bring stuff like this to light — just about anybody can post an image on Twitter, and it can start trending," Meirick told us. "But it’s caused a stir before."