Zina Bash's husband said claims that she was making the gesture equate to a "vicious conspiracy theory." 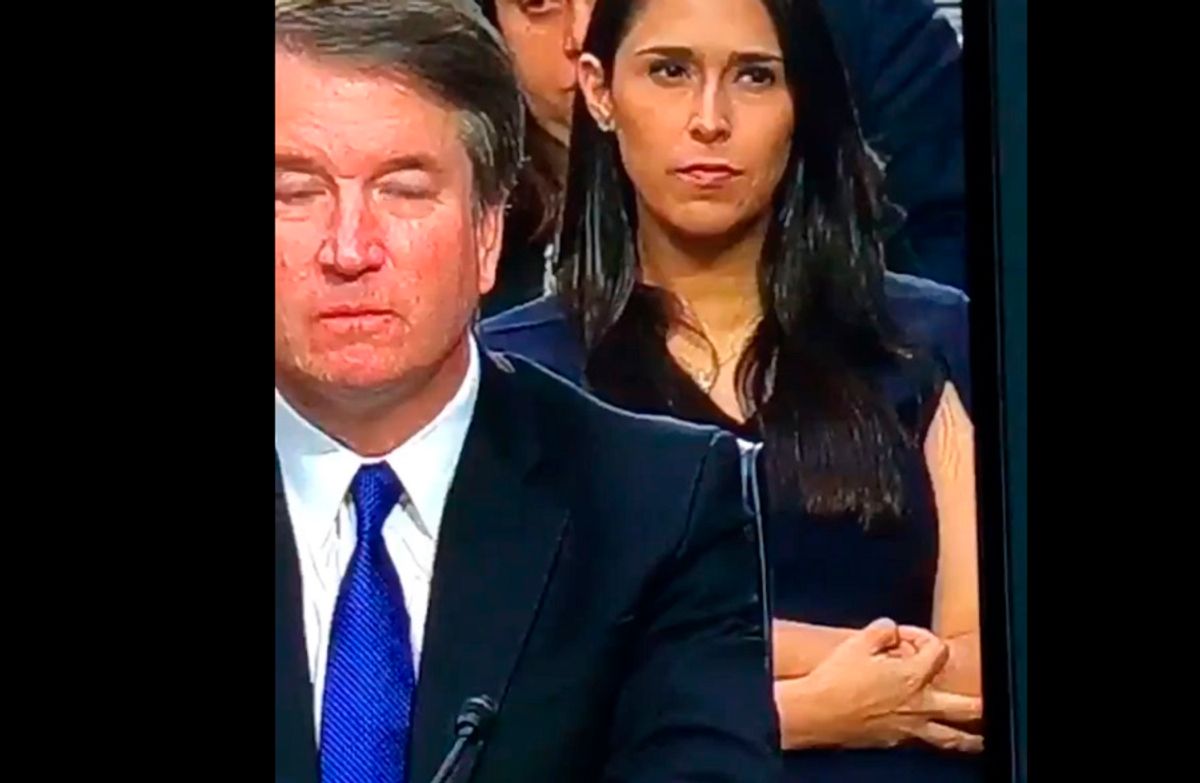 Claims that the "Ok" hand gesture are in fact a "white power" signal may have started as an online troll, but they've periodically swept social media ever since President Donald Trump took office. And on 4 September 2018, accusations flooded the online world when a White House lawyer was seen sitting behind Judge Brett Kavanaugh during his Supreme Court confirmation hearing with her right hand making what some viewersinterpreted as the "white power" gesture:

Kavanaugh’s former law clerk Zina Bash is flashing a white power sign behind him during his Senate confirmation hearing. They literally want to bring white supremacy to the Supreme Court. What a national outrage and a disgrace to the rule of law. pic.twitter.com/uQGOpNa6xg

The lawyer, Zina Bash, once served as a clerk for Brett Kavanaugh, who is Trump's second U.S. Supreme Court nominee. She sat directly behind Kavanaugh to his left, where she was widely seen on camera resting her right hand on her left arm, thumb and pointer finger forming a circle.

Bash's husband, U.S. attorney John Bash, took to Twitter to blast his wife's accusers, pointing out that she is of Jewish and Mexican descent, and saying the couple has "nothing to do with hate groups, which aim to terrorize and demean other people — never have and never would":

The attacks today on my wife are repulsive. Everyone tweeting this vicious conspiracy theory should be ashamed of themselves. We weren’t even familiar with the hateful symbol being attributed to her for the random way she rested her hand during a long hearing. 1/3

Zina is Mexican on her mother’s side and Jewish on her father’s side. She was born in Mexico. Her grandparents were Holocaust survivors. We of course have nothing to do with hate groups, which aim to terrorize and demean other people — never have and never would. 2/3

Some of the Twitter comments have even referred to our baby daughter. I know that there are good folks on both sides of the political divide. I hope that people will clearly condemn this idiotic and sickening accusation. 3/3

Bash's paternal grandparents, according to those who know her, were not only Jewish but also Holocaust survivors:

My friend Zina Bash, whose father is Polish-American Jew (whose parents escaped the Holocaust) and mother immigrated from Mexico is not a white supremacist. https://t.co/4SuZzSSq05

Claims that members of U.S. President Donald Trump's administration have flashed "white power" symbols are not new. In February 2017, controversy erupted when a Reuters photographer captured Trump adviser Stephen Miller appearing to make the gesture. Similar claims were made again in January 2018 when White House intern Jack Breuer was seen making the gesture during a group photograph. In Miller's case, the absence of video footage made it unclear whether he was flashing the gesture purposely or merely accidentally did so while flaring his fingers to adjust his suit. In the latter case, Breuer said he was mimicking a gesticulation President Trump often makes during speeches and denied he was making a white power sign.

Because we can't read minds, we can't discern what anyone's true intentions were in the realm of hand positioning. According to the Anti-Defamation League (ADL), an organization that tracks hate groups, the gesture started as a hoax on the Internet message board 4chan in reaction to the sudden rash of media scrutiny placed on white supremacists and the alt-right after the 2016 presidential election:

The “OK” hand gesture hoax originated in February 2017 when an anonymous 4channer announced “Operation O-KKK,” telling other members that “we must flood Twitter and other social media websites ... claiming that the OK hand sign is a symbol of white supremacy.” The user even provided a helpful graphic showing how the letters WP (for “white power”) could be traced within an “OK” gesture. The originator and others also suggested useful hashtags to help spread the hoax, such as #PowerHandPrivilege and #NotOkay. “Leftists have dug so deep down into their lunacy,” wrote the poster, “We must force [them] to dig more, until the rest of society ain’t going anywhere near that s***.”

The gesture has been used in the past by what the ADL refers to as "alt right" and "alt lite" -- far right extremists who range from outright white supremacists to those who publicly shun racists but otherwise fall in step with their belief systems. White supremacist Richard Spencer infamously flashed the sign in front of Trump International Hotel in Washington, D.C.: When we wrote about the issue eight months ago, Mark Pitcavage, senior research fellow at the ADL’s Center on Extremism, told us that even though the gesture amounted to little more than trolling, that didn't mean it couldn't evolve into something more sinister:

Right now whenever anyone is using it in this context it’s very sort of ironic and trolling. But if it persists there’s a chance the ironic aspects of it might fall away with time. That happens organically and it’s way too soon to know if the usage will just drop off once they get bored with it, or if they continue to using it ironically in a trolling fashion, or something else.

A few days after the original brouhaha, images of Zina Bash making the same symbol at a subsequent day of the Senate hearings were circulated online:

Remember your long, whiny rant about people being unfair to your wife’s hand gesture?

Yeah, we’re going to need you both to **** off now. pic.twitter.com/JQX6oRFADV

This behavior drove speculation that Bash (in the second case) was trolling those who had criticized her the first time around:

Following accusations that she openly displayed a white supremacist hand gesture during one of Supreme Court nominee Brett Kavanaugh's confirmation hearings, Zina Bash stoked the flames by making the exact same gesture during another session.

Bash once again took a seat behind Kavanaugh and sparked a huge online debate as to whether she deliberately made an OK sign with one of her hands while crossing her arms.

On the third day of testimony from Kavanaugh, Bash was recorded yawning behind the judge before once again flashing an OK sign. However, this time Bash appeared to knowingly look directly into the camera while making the otherwise innocuous gesture.

Once again, social media was filled with speculation that Bash was trolling those who'd suggested she was making a white-power gesture last time.