Could a Blue Whale's Fart Contain a Horse?

This story, like the feeding behavior of the animal in question, is a deep dive. 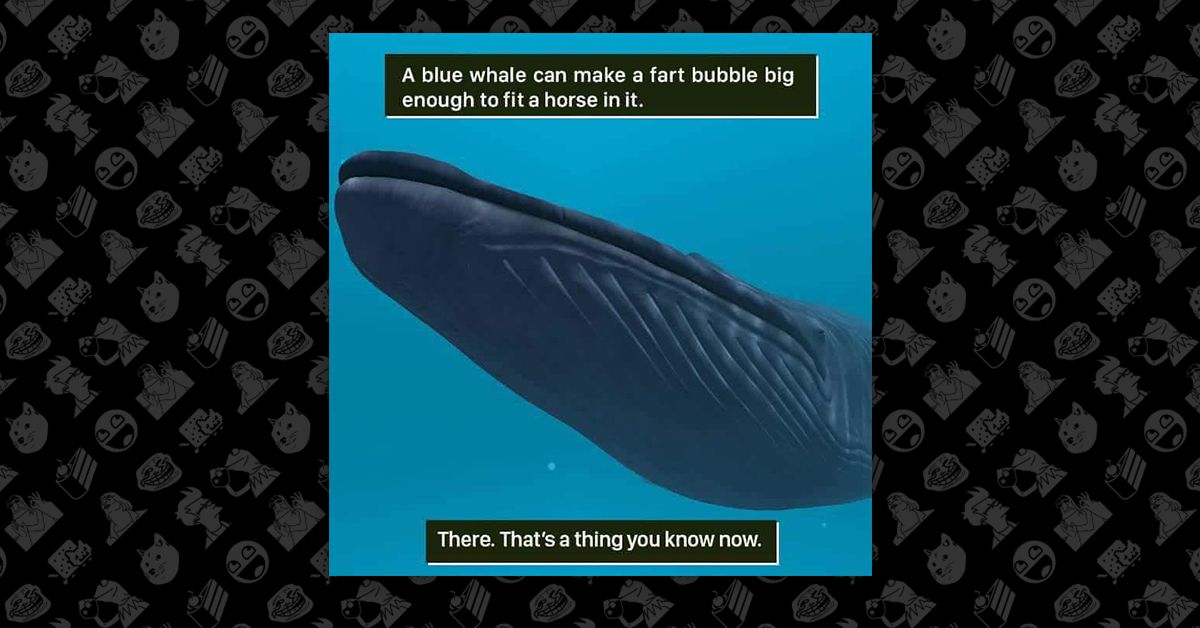 One of the most popular flatulence related marine biology "facts" on the internet is the claim that the diameter of a single bubble of flatulence produced by a blue whale could be large enough to contain a horse: It brings us no joy to report that whale fart science appears too primitive a field of study to produce a clear answer to that query at the moment. In fact, there appear to be disagreements over even the most elementary aspects of the question. For example, do whales actually fart?

Blue whales, krill-eating baleen whales that are largest creatures known to planet Earth, spend most of their time underwater spread out over extremely large ranges, making the observation of farts (and other behaviors) difficult to study. According to Nick Caruso and Dani Rabaiotti’s aptly titled book Does It Fart?, however, blue whales do, indeed, fart:

As you can imagine, whale farts are incredibly large. Blue whales, Balasnoptera musculus, which are currently the largest animal on the planet, likely emit the largest volume (per fart) of any extant species. Whales, in accordance with their body size, have huge digestive systems, containing a number of stomach chambers which, in the case of the blue whale, combined can hold up to one ton of food. [...]

Given their size, whale farts are remarkably elusive and have only been captured a handful of times on camera. Whale researchers who have been downwind of these bouts of flatulence report them to be incredibly pungent.

Cetaceans, on the other hand are generally not specifically tied to any one area of water and they dispose of their feces continually.  That means they generally do not have the ability to store fecal material or gas.  This is true of delphinids (dolphins) and balaenopterids (blue whale and relatives).  The delphinids, particularly the bottle dolphin, have been observed in captivity for years, as far as I know, there is no indication of expulsion of rectal gas.

These two interpretations could come down to how a fart (referred to in scientific circles as flatus), is defined. Does It Fart provides an admittedly broad definition:

The word "fart" dates back to the fourteenth century, before the term flatulence came into use, and was used specifically to mean breaking wind loudly. Today the term fart is more commonly used to describe any gas expelled from the end of an animal that is opposite to its mouth—whether this be through the anus, cloaca or a specialized duct—and if it is audible or not. This, therefore, is the definition used throughout this book. So, although some of the farts in this book may not fit the strict medical definition of flatulence, they would generally be accepted as a fart to any human encountering them.

Obviously blue whales, like all animals, excrete feces and expel gases as a byproduct of their metabolism, a process that could likely be considered a fart by Does It Fart? standards. But there remain open questions: How much of that gas is expelled from the anus (as opposed to, for example, their blowhole)? Are there any mechanisms that would allow for the build up pressure before a release of those gases, or would whale flatulence be more akin to a slow and steady leak of air from a tire? The scientific and popular literature offers only vague hints.

For example, there have indeed been occasional mention of whale flatulence in the scientific literature. A 1990 study that sought to study the sounds of a variety of marine mammals made reference to noises produced by whale farts, but as a largely tangential and unsupported point:

Miscellaneous sounds are adventitious sounds (e.g. baleen rattle, flatulence, or rubbing against an object) and are considered to have no intentional communicative function.

There are, as well, a number of purported videos or photographs allegedly capturing whale flatulence. The most popular YouTube result for "whale fart" yields a video that does appear to show gas being released in a bubbly fashion from the general region of a whale’s anus, and includes a clearly manufactured human fart noise as, we suppose, a joke. (Those bubbles, in point of fact, quite clearly could not contain a horse). Other videos, despite being labeled as farts, show things like whales defecating or burping.

We know from first hand accounts that baleen whales, like blue whales, expel large quantities of gas by "burping" through their blowhole, and that being in proximity to such an event is a harrowing and memorable ordeal:

The water erupts just ahead of our boat—a blow of mist. It hovers, drifts in the breeze, dampens our faces, jackets, and hands. My notebook is coated in dew. Then we smell it.

The odor is blunt and pungent, almost a taste in the mouth, an unholy mingling of fart and fishiness—hundreds of gallons of air forcefully expelled from its lungs, laced with the fumes of half-digested krill, hundreds of pounds of these slow-dissolving crustaceans fermenting in its stomach.

The picture is of an Antarctic minke whale taken from the bow of a ship, [...] The white bits in the photo are pieces of ice-floe, the stream of pinky colour behind the whale is a faecal plume - a.k.a. "poo" - the large circle in the water is indeed the physical eruption of the whale's flatulence."

We have reached out to Gales for more information on the circumstances of that photo and why he is sure that the bubble came from the whale's anus rather than its blowhole, but for some reason have not yet received a response.

However, if we take the existence of this fart bubble photo as fact, we can use it as one possible way to address the horse claim. The Antarctic minke whale is among the smallest of the baleen whales — the average adult female is 29.2 feet long, and the average males 28.2 feet long, or 8.9 and 8.6 meters respectively. Taking a generous estimate of 30 feet for the allegedly gassy Antarctic minke whale in the fart photo as a scale, the diameter of the breaching fart bubble is roughly 16 feet long — though that does not necessarily mean the bubble was anywhere near that size before it broke up on the surface.  A sphere with a roughly 8- to 16-foot diameter could likely contain a horse, whose average head to tail length is eight feet.

Another factor that complicates this question, besides its largely irrelevant nature and its clear methodological challenges, is how we define what kind of bubble could theoretically contain a horse. Thanks to the ideal gas law, we know that at higher pressures deeper in the water, a gas will take up less volume and expand as it rises. The depth at the time of a horse’s encapsulation into a fart bubble is a crucial variable that would need to be defined before one can adequately address the fart bubble/horse comparison.

We asked Dani Rabaiotti, co-author of Does it Fart?, if she had heard of this horse claim, and if she had any opinions on it. Via Twitter, she told us she too had labored over this very same question:

I think basically the conclusion I have come to in numerous discussions is it depends on the size of the horse, and whether said horse has to be in solid form. It also depends on what depth your whale fart [occurs], because obviously gases become compressed at depth.

A liquified shetland pony would undoubtedly fit in a whale fart at shallow depth. But a solid clydesdale isn't going to fit into a whale fart down at 500m.

Ultimately, our inability to rate this claim stems from uncertainty about the nature and even existence of whale farts. Yes, their digestive system, which processes up to four tons of krill every day, likely produces a prodigious amount of gas, but how common is it for a whale to build up all that pressure when it could just be venting slowly and silently at all times? How many whale burps have been misidentified as whale farts? Why are we using a horse as a way to measure fart size in the first place?

Someday, we hope to have a clearer answer to these questions for you. But not today.