Agents burst into the home of an alleged undocumented immigrant, pointing weapons at his wife and children inside. 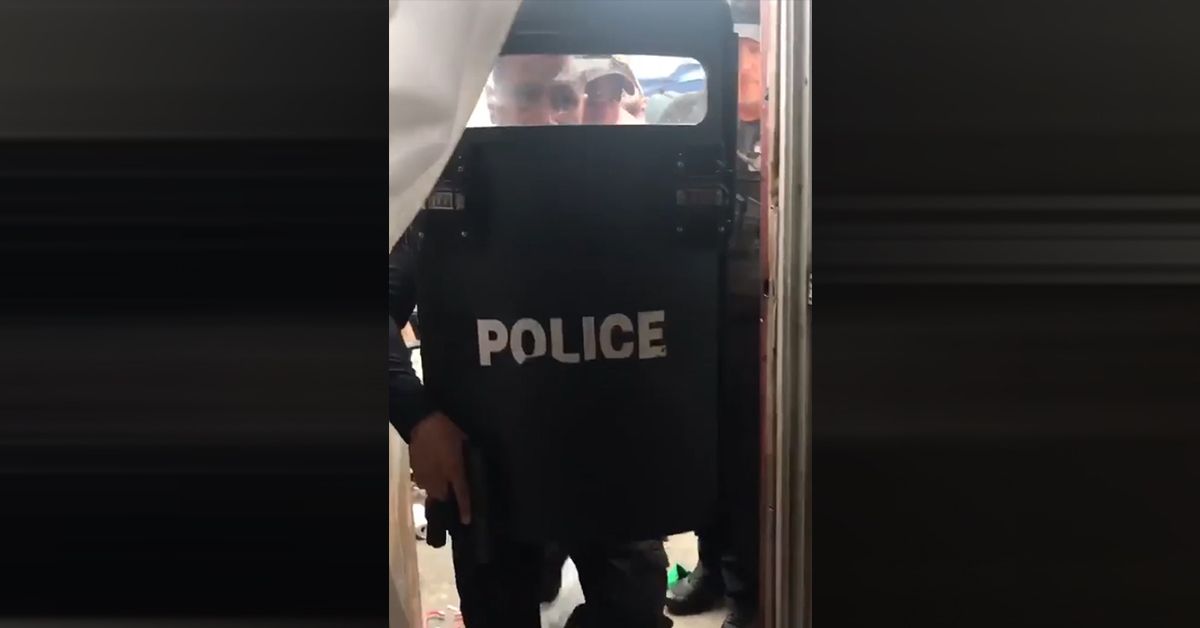 A widely-viewed video of a raid by Immigration and Customs Enforcement (ICE) agents in San Diego County seen bursting into a home with firearms drawn and refusing to show occupants a warrant is raising questions about the tactics used:

ICE agent arrested 31-year-old Alberto Alonso-Hernandez on 8 May 2018 at his home in the south San Diego County town of National City on charges of re-entering the United States after having been deported twice, once in 2008 and again in 2015, according to court documents. He is being held in lieu of $20,000 bond.

Video taken by Alonso's 11-year-old daughter Jocelyn shows immigration officers breaking through a metal screen door to the family's home. Alonso's wife Brianna can be heard saying she has children inside. Both ask to see a warrant.

Instead of showing them the document, an officer tells them, "Ma'am, you're watching too much movies."

They then push into the home with a riot shield and weapons pointed toward the home's occupants, including Alonso's wife and five children. Jocelyn told the San Diego Union-Tribune that an ICE agent grabbed her wrist and twisted it to force her to stop filming, leaving a red mark. The agents can then be seen dropping the warrant on the floor as they leave the house. Amid the chaos, children can be heard wailing.

Court documents show that immigration agents acted on an anonymous tip when they approached Alonso as he was leaving for work at 6:35 a.m. on Tuesday. When he saw them, Alonso went back inside his home. ICE agents then sought and received a criminal warrant for illegally re-entering the United States from a federal judge.

Pedro Rios, director of the U.S.-Mexico Border Program of the American Friends Service Committee and who is acting as an advocate for the family, told us ICE agents turned off the electricity to the family's home in an effort to force Alonso to come out, and only restored it after members of the community blocked their vehicles from leaving the scene. Rios also said he saw ICE agents point firearms at a second-floor window where children were present. He posted a photograph of what he witnessed to social media:

Meanwhile, ICE was pointing their guns at children on the second floor, and as they broke into the house. The warrant was dropped on the floor after the raid. Shameful tactics. pic.twitter.com/y3sXn6rXWl

Rios told us he was surprised by the aggressive tactics used in the incident, which unfolded with many witnesses watching and recording with cell phones:

They [ICE agents] felt comfortable enough using this level of violence knowing they were being watched and filmed. That level of comfort makes me wonder what happens when they are involved in these types of incidents and no one is around to witness or document them.

In response to our questions about the incident, ICE spokeswoman Lauren Mack sent the following statement:

Alberto Alonso-Hernandez, a 31 year-old Mexican national, was taken into ICE custody by officers with the San Diego Enforcement and Removal Operations office in San Diego. ERO officers attempted to arrest Mr. Alonso-Hernandez during a vehicle stop near this residence. The suspect fled from the scene and hid inside his house, forcing the officers to obtain a criminal arrest warrant for illegal re-entering the United States. The warrant was issued by a federal judge and Mr. Alonso-Hernandez was taken into custody at his residence several hours later.

Mr. Alonso-Hernandez was targeted for arrest based on his prior criminal and immigration history. ICE records reveal he was convicted for battery of a spouse in 2007, and has illegally re-entered the United States 16 times since 2003.

The raid and official statements given by ICE left more open questions than answers. Mack said she was not authorized to comment on why force was used, other than to add, "ICE legally obtained and properly executed a Federal criminal arrest warrant issued by the U.S. District Court for the Southern District of California." We also asked for clarification of the claim that Alonso illegally reentered the U.S. 16 times. Court records noted two deportations and his family was informed of six.

According to court records for the case referenced by ICE, Alonso was arrested on one count of misdemeanor battery on New Year's Day in 2007. Gerry Braun, chief of staff for the San Diego City Attorney's Office, told us Alonso pleaded guilty on 4 January 2007 to the charge. He was sentenced to three years' probation and ten days of community service. He was also required to complete a domestic violence recovery program and attend Alcoholics Anonymous meetings. Alonso satisfied the the terms of his sentence for that case, Braun told us.

Rios said Alonso, a house painter, was the sole breadwinner for his family:

I think the biggest motivating factor for a lot of people who are deported and return to the U.S. is that they want to provide for their families. Now this family finds itself in a very precarious situation.

According to federal booking records, Alonso is being held at the Metropolitan Correction Center in downtown San Diego.