The broadcast company was accused of pushing propaganda for a March 2018 segment which it said was actually intended to criticize fake news. 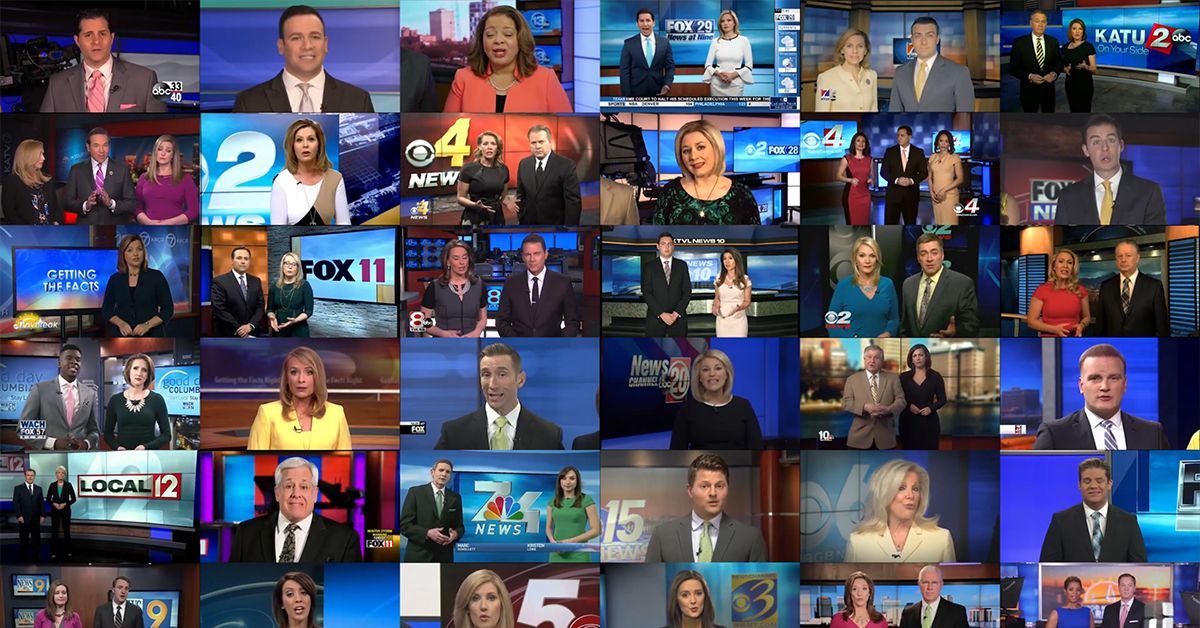 Amid a flurry of criticism generated by the spread of a video showing its employees reciting the same "must-read" news copy, Sinclair Broadcasting Group said its message was "lost in translation" during a meeting with officials from two journalism groups representing media members from communities of color.

The National Association of Hispanic Journalists and the National Association of Black Journalists said in a joint statement on 4 April 2018 that its respective presidents spoke to Christopher Riley, SBG's president and chief executive officer, by phone in order to address responses to the video published by Deadspin that shows various anchors at Sinclair-owned stations across the country reciting a mandated company-wide commentary decrying what was described as "one-sided" news stories:


According to the statement released by the two journalism groups, Riley and SBG vice-president of news Scott Livingston said that "Sinclair's 'must-read' message read by anchors at its local television stations last week got lost in translation and the backlash was a 'teaching moment.'"

"NAHJ and NABJ asked Sinclair to commit to ensuring diverse staffing in front of the camera, and behind the scenes in executive and decision-making roles," the statement read.

The statement also confirmed that SBG will be recruiting at each group's upcoming national conventions. A spokesperson for NABJ told us that Sinclair's participation will not extend beyond recruiting at that group's carer fair. But the company's logo is posted in an e-mail sent to NAHJ members urging them to attend its conference and career fair scheduled for July 2018: "We're looking to reinvent conference programming again and influence the industry by moving a significant portion to hands on training and deep dive workshops," the e-mail says. "To do so, we've brought together some of the top industry leaders to curate our curriculum."

We asked NAHJ president Brandon Benavides for clarification about Sinclair's involvement in the event, including whether it has any decision-making power over the conference curriculum. He replied, "No comment."

Sinclair, which owns or operates around 170 television stations around the U.S., came under heavy criticism from other media professionals and observers after the "must-read" segment aired in March 2018. Each station was directed to have the copy read by two anchors, and a partial transcript of the announcement reads:

(A) But we're concerned about the troubling trend of irresponsible, one sided news stories plaguing our country. The sharing of biased and false news has become all too common on social media.

(A) Unfortunately, some members of the media use their platforms to push their own personal bias and agenda to control 'exactly what people think' ... This is extremely dangerous to a democracy.

Former SBG employees called the segment "propaganda"; the Columbia Journalism Review described it as an "attack on the press."

Andrew Seaman, chair of the ethics committee for the Society of Professional Journalists, told us that this latest commentary script can be lumped in with other segments the company has already ordered to run on local affiliates.

"In general, it's best that local journalists and editors/news directors make the content decision for their stations," Seaman said in an e-mail:

Who else is better positioned to know what's important to their viewers and communities? The parent company should support the local stations in their quest to deliver the most accurate and important information to their viewers. Unfortunately, Sinclair has a very long and clear history of going beyond that duty by feeding eyebrow-raising content to its stations.

Sinclair outlets are also required to run weekly commentary segments from Boris Epshteyn, a former campaign advisor to United States President Donald Trump. On 21 March 2018, a segment featuring another former Trump administration official, Sebastian Gorka, criticizing what he called a "deep state" aligned against the president, was produced by a former anchor and reporter for RT, a Russian state-owned broadcast outlet.

Before calling the negative response to the latest segment a "teachable moment," though, Livingston reportedly accused non-SBG media outlets of publishing "misleading, often defamatory stories" and ignoring the work put in by SBG personnel.

The company is currently seeking approval from the Trump administration for a $3.9 billion-purchase of 42 additional stations from Tribune Media, a prospective move that has already drawn criticism from Jessica Rosenworcel, a commissioner with the Federal Communications Commission. Rosenworcel said on Twitter that her agency has made decisions "custom-built" for SBG's business plan.

Ajit Pai, who chairs the commmission, is under investigation by the FCC's internal monitoring group to determine whether he timed FCC policy changes to benefit Sinclair.

Seaman said he did not know whether Sinclair would have a presence at SPJ's 2018 convention, but added: "I can tell you I'll be avoiding and encouraging other people to avoid the Sinclair booth — if there is one."