How Many School Shootings Have Taken Place So Far in 2018?

The difficulty of agreeing on a common definition of "school shooting" shows just how many different types of firearm incidents occur on school grounds. 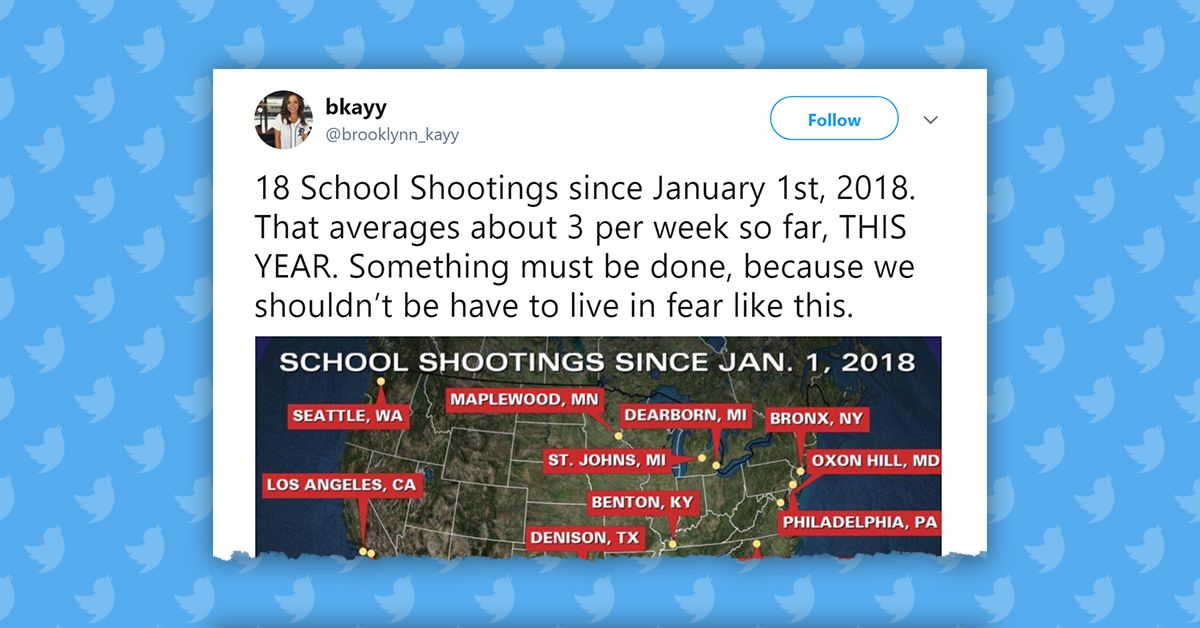 Seventeen people were killed and more than 15 injured in a mass shooting at Marjory Stoneman Douglas High School in Parkland, Florida, on 14 February 2018, bringing the total number of school shootings in the United States since the beginning of the year to 18 (or roughly three per week), according to the gun control advocacy group Everytown for Gun Safety.

That shocking figure was reported in the press and endlessly repeated on social media as the day wore on:

18 School Shootings since January 1st, 2018. That averages about 3 per week so far, THIS YEAR. Something must be done, because we shouldn’t be have to live in fear like this. pic.twitter.com/1uTxLwXJbV

Maybe, just maybe, after 18 school shootings in America in just 43 days of 2018 the Congress might want to consider common-sense gun safety legislation and save innocent lives.

But not everyone was convinced of the validity of that figure, which was based on Everytown's five-year running count.

"The problem is that it's not accurate," wrote Siraj Hashmi in an editorial for the Washington Examiner:

There haven't been 18 of what we would refer to as "school shootings" in 2018. The media is either sheepishly or deliberately moving the goalposts and widening the definition of what constitutes a school shooting.

Hashmi and others who called the statistic into question had a point. When we looked into it, we found that although all the incidents involved the firing of weapons on school grounds, some bore little resemblance to what most of us would think of when we hear that a school shooting has taken place. Two were solely suicides, for example (one of which Everytown retracted on 15 February after the Washington Post pointed out that it occurred at a school that had been closed for several months). Three involved the accidental firing of a weapon. Eight resulted in no injuries. Only seven were intentional shootings that occurred during normal school hours.

Of course, many viewing Everytown's statistic and map image, especially in the wake of Parkland, might mistakenly assume that "school shooting" indicates a Columbine-style event, or at the very least the intention by the perpetrator to carry one out. We'd suggest it would be more useful to refer to Everytown's tally as "gunfire incidents on school grounds" and perhaps limit the criteria to shootings that took place during school hours when students or faculty are actually present.

The difficulty of defining what exactly a school shooting is highlights how common it is to find guns on school grounds — in the hands of intruders, security personnel, and the students themselves. Should the accidental firing of a weapon count as a school shooting? What if someone is injured or killed in such an incident? What about intentional shootings that injure no one? Or incidents in which a non-student kills another non-student on school grounds late at night? The Washington Post's alternate tally of only five school shootings in 2018 excludes any that did not cause a physical injury, which also seems to obscure the point.

This is the definition of "school shooting" used by Everytown for Gun Safety (as stated on their web site):

Consistent with expert advice and common sense, Everytown uses a straightforward, fair, and comprehensive definition for a school shooting: any time a firearm discharges a live round inside a school building or on a school campus or grounds, as documented by the press and, when necessary, confirmed through further inquiries with law enforcement or school officials. Incidents in which guns were brought into schools but not discharged, or where the firearm was discharged off school grounds, are not included. The database is updated as new shootings occur or as new evidence emerges about prior incidents.

When we asked Everytown for a response to criticisms that their criteria for school shootings are too broad, we received a prepared statement from Sarah Tofte, the organization's director of research and implementation:

Every time gunfire breaks out on school grounds, it can shatter a child's sense that they are safe in their school and in their community. Tracking each of these incidents is an important way to measure some of the many ways that shootings affect children in this country.

To be sure, every time a gun goes off in a school, intentionally or not, and whether anyone is injured or not, it's potentially traumatic for students, teachers, and parents. We find no fault with Everytown's raw data, which is useful and important, only with the overly broad way it is categorized and then parroted in the media.

Breaking Out the Numbers

As of Everytown's 15 February update, the total number of school gunfire incidents in 2018 stood at 17. Using their numbers as a starting point, we've broken out all the known incidents between 1 January and 14 February 2018 into more detailed categories.

22 January: NET Charter High School, Gentilly, Louisiana - An unknown person fired shots at students from a vehicle in the school parking lot. One person was injured (though not by gunfire).

25 January: Murphy High School, Mobile, Alabama - A student fired a handgun into the air during a fight with another student. No injuries were reported.

26 January: Dearborn High School, Dearborn, Michigan - Shots were fired during a fight in the school parking lot. No injuries were reported.

31 January: Lincoln High School, Philadelphia - A fight during a basketball game resulted in the shooting death of a 32-year-old man outside the school.

Firearm attacks NOT occurring during school hours: 2 (incidents resulting in injuries or deaths: 2)

20 January: Wake Forest University, Winston-Salem, North Carolina - A 21-year-old was shot and killed during a fight at a party on school grounds.

5 February: - Oxon Hill High School, Oxon Hill, Maryland - A student was shot and injured in the school parking lot during an attempted robbery.

10 January: California State University, San Bernardino, California - Bullets were fired through a window, with no suspects or motive identified.

8 February: Metropolitan High School, New York, NY - A student fired a gun into the floor of a classroom.

10 January: Grayson College, Denison, Texas - A student fired a weapon belonging to an adviser, believing it wasn't loaded. No injuries were reported.

5 February: Harmony Learning Center, Maplewood, Minnesota - A third-grader pressed the trigger of a law enforcement officer's handgun. The weapon went off but no one was injured.

10 January: Coronado Elementary School, Sierra Vista, Arizona - A middle school student shot himself in the bathroom of the school and was pronounced dead at the scene.

15 January: Wiley College, Marshall, Texas - Gunshots fired from a vehicle in the parking lot of a college dorm entered through a window, but did not injure residents.

Corrections [20 February 2018]: A previous version of this article erroneously stated that a rifle had been used in the 1 February unintentional shooting in Los Angeles; it also misspelled the name of Grayson College.