What Is 'Chain Migration'?

President Trump pledged in his 2018 State of the Union address to end "chain migration," but what exactly does that term mean and where did it come from? 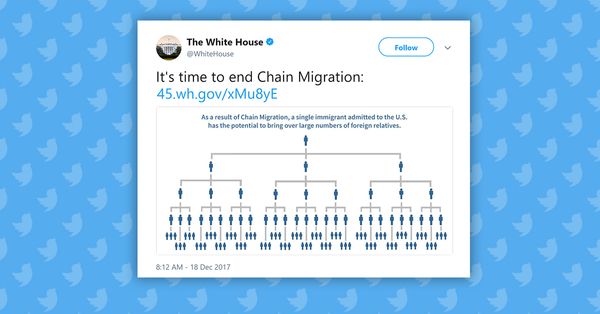 One pillar of the immigration reform proposal United States President Donald Trump announced in his 30 January 2018 State of the Union address is to end "chain migration," an immigration policy he characterized as a threat to national security:

The fourth and final pillar protects the nuclear family by ending chain migration. Under the current broken system, a single immigrant can bring in virtually unlimited numbers of distant relatives. Under our plan, we focus on the immediate family by limiting sponsorships to spouses and minor children. This vital reform is necessary, not just for our economy, but for our security, and our future.

In recent weeks, two terrorist attacks in New York were made possible by the visa lottery and chain migration. In the age of terrorism, these programs present risks we can no longer afford.

His remarks were booed by Democratic members of Congress, some of whom took to social media to challenge and condemn Trump's assertion that immigrants are currently allowed to bring in "virtually unlimited numbers of distant relatives":

Because it's not true. A single immigrant cannot bring in an unlimited amount of family members. There are no visas for aunts/uncles/cousins/grandparents. And some need to wait decades to reunite with one family member. ONE family member. #SOTU https://t.co/2dpjxwdMRM

Teleprompter Trump lies and sows fear about immigrants. There is no such thing as chain migration. It's called family reunification. #SOTU

It's an apt time to take a closer look at what the policies Trump describes as "chain migration" really entail, where the term came from, and whether it's true (as Trump and some other Republicans claim) that under current law immigrants can sponsor near-unlimited numbers of relatives for permanent U.S. residence and the policy presents a unique threat to the safety and security of the United States.

The policy to which Trump is referring is actually called "family-based immigration" by United States Citizenship and Immigration Services. Under the terms of the USCIS program, U.S. citizens and lawful permanent residents (LPRs, aka green card holders) can sponsor immigrant visas for certain family members. These fall into two categories:

1. Immediate relative (or "family reunification") visas, available to applicants having a "close family relationship" with a U.S. citizen:
- Spouses
- Unmarried children under 21
- Orphans adopted abroad or to be adopted in the U.S.
- Parents (if citizen is 21 or older)

In addition to bearing responsibility for application fees and any ancillary costs, sponsors of immigrant family members must prove they can support them financially for an extended period of time, starting with proof of an income at or above 125 percent of the federal poverty level. They remain financially responsible for all sponsored immigrant relatives until the latter become citizens, are credited with having worked 10 years in the U.S., leave the country permanently, or die.

Further, the total number of immigrants allowed into the country under each relationship subcategory is subject to an annual cap. For example, currently only 23,400 unmarried sons and daughters of U.S. citizens and their minor children are granted visas each year. Only 65,000 brothers and sisters of U.S. citizens, plus spouses and minor children, are granted visas. As of 2017, the waiting period for applicants in the latter group averaged more than 13 years (and even longer for people from high-demand countries such as Mexico), according to USCIS.

Trump wasn't specific about what he meant by "distant relatives" — those who are supposedly streaming into the country in unlimited numbers — but if he was referring to grandparents, aunts, uncles, cousins, nieces, nephews, or in-law relatives, he was simply wrong. None of them are eligible for family-based sponsorship.

One might argue that aunts and uncles, for example, are indirectly eligible, in that an immigrant who obtained a visa as the parent of a U.S. citizen 21 or older could, after becoming a naturalized citizen themselves, sponsor siblings for permanent residency. But realistically, that would take at least 18 years to accomplish — five for the first immigrant to fulfill naturalized citizenship residency requirements, then 13 more on the immigration waiting list for the siblings.

Those descriptions are so at odds with how the system really works that some defenders of family-based immigration are claiming that the term "chain migration" was coined purely for propaganda purposes:

Reminder: "chain migration" is a made up term by the hardline anti-immigration crowd. Its purpose is to dehumanize immigrants. If you're using that word, you're declaring a side.

Sen. Murphy and others who make the same claim are mostly wrong about that, however. "Chain migration" is a legitimate sociological term that has been in use for at least the past sixty years. However, its meaning has been reshaped in order to fit a new definition.

So as it is defined in a sociological or anthropological sense, there's nothing derogatory or dehumanizing about it. "Chain migration" describes a universally recognized aspect of immigration everywhere: that humans simply want to be near their families. But Sen. Murphy and others are right in the respect that, when coupled with the opinion that immigration is a problem and there are too many immigrants in the first place, "chain migration" takes on a distinctly pejorative cast.

It's shaded even more by the deceptive way Trump and others use the term, essentially redefining it as "unlimited numbers of distant relatives" being brought into the country. As noted above, the legitimate definition of "chain migration" is family members sponsoring family members for immigration. When he speaks of "ending" chain migration, what he really means is limiting it to spouses and minor children. It's still chain migration under any proper definition of the term.

Does chain migration threaten the safety and national security of the United States? In the generic sense that it facilitates the immigration of a larger number of people than would otherwise be able to do so, yes — but the same can be said of any immigration policy that brings more, as opposed to fewer, people into the country. There is scant evidence that chain migration per se brings more criminals and terrorists into the United States than any other immigration category.

Cato Institute immigration policy analyst Alex Nowrahsteh, who has compiled statistics on terrorist acts committed by immigrants in the United States, says the alarm raised by Trump and others over chain migration and terrorism is disproportionate to the facts. Only .4 percent of all deaths in terrorist attacks on U.S. soil since 1975 are attributable to green card holders, he says, only some of whom would have entered the country on family preference visas:

"Whatever other merits could accrue from reforming chain immigration or the diversity visa," Nowrahsteh writes, "security is not a serious one as the danger is already so low."

Nowrasteh, Alex.  "One in a Billion Chance a Year of Being Killed by a Chain Immigrant in a Terror Attack."   Cato Institute.  12 December 2017.

U.S. Citizenship and Immigration Services.  "How Do I Financially Sponsor Someone Who Wants to Immigrate?"   October 2013.