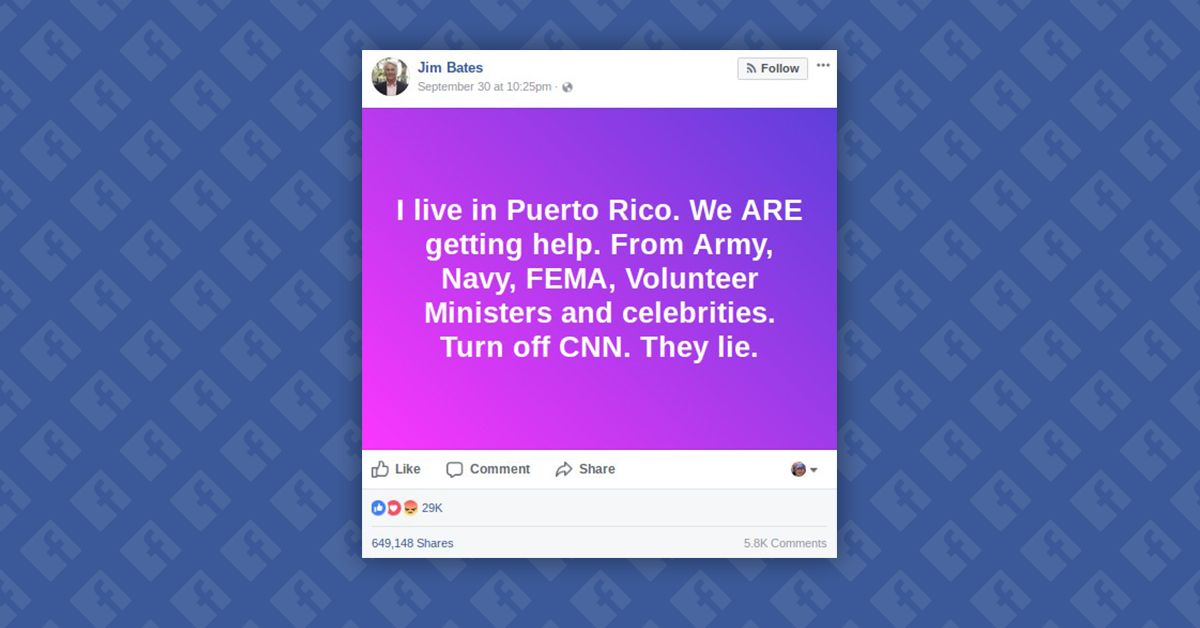 On 30 September 2017, a Facebook user going by Jim Bates posted a message accusing CNN of lying about the relief effort in Puerto Rico: Bates didn't specify what CNN had actually lied about during its coverage of the crisis there. Regardless, this message struck a chord with social media users, and it was shared hundreds of thousands of times within a few days of its initial posting.

The popularity of his post led some readers, naturally, to believe that something with his information was amiss. For one, Bates was relatively inactive on Facebook since starting his account in 2010. It wasn't until September 2017 that he became a regular poster; further, his personal page showed that he belongs to many Russian-language groups, leading some skeptics to think that he might be a paid troll.

This continued when Bates posted photographs purportedly showing volunteer workers in Puerto Rico to a chorus of claims that he was actually using images from hurricane relief efforts in Texas and Florida: However, the people featured in these photographs belong to the Volunteer Ministers, a Church of Scientology program that provides disaster relief and emergency response. Their Facebook page includes several similar photographs showing volunteer workers in various locations, but as of the morning of 2 October 2017, these specific images had not been shared on that page. The Church of Scientology also published a press release on 28 September 2017, which announced that  six members of Scientology Volunteer Ministers (VMs) Disaster Response team had traveled to Puerto Rico to assist in the relief efforts:

This week, six Clearwater Scientologists who are members of the Scientology Volunteer Ministers (VMs) Disaster Response team travelled to Puerto Rico to assist in the aftermath of Hurricane Maria relief efforts.  The VMs found Puerto Ricans waiting in line for 10 hours for food and gas and 3,000 people waiting outside banks which have just reopened. There is complete power outage on the streets, phone services have not been restored and Puerto Rico airports have not yet reopened to commercial flights.

Volunteer Minister Kirstie Clements said, “There is so much need – the entire island is a disaster zone.  The conditions are 10 times worse than we expected.  But we also found an amazing strength and perseverance among the people of Puerto Rico. There are 3 million people without food, water and electricity.  Yet they are asking us what they can do to help us.  I never experienced this in any other disaster.  They are great people and we are going to give them all the help we can.”

Adventures abound on the island. One night, driving on the pitch black streets to their impromptu “headquarters” set up at the Church of Scientology Puerto Rico, the car in front of the VMs crashed into a gigantic tree that had fallen on to the road. The VMs immediately went to the assistance of the couple in the crashed car.  While one VM cleaned and dressed their wounds and re-oriented the couple to their surroundings with the aid of a Scientology “Assist”*, the other VMs moved the tree out of the way and redirected traffic until the police arrived.

One local official told the VMs, “The help does not arrive and we do not have communication. When you arrived it was like a breath of hope. Thank you.”

However, it's still unclear what Bates meant when he accused CNN of lying about the relief effort. In fact, the press release, as well as his subsequent posts, seem to contradict the idea that CNN was exaggerating the need for aid in Puerto Rico in the aftermath of Hurricane Maria. Bates has repeatedly called for people to donate to his church's relief efforts, and the press release states that the "entire island is a disaster zone," that there is a "complete power outage," and that there are millions of people without food, water and electricity.

We do not yet know exactly why Bates posted his message about CNN, but we can note the effects. Hundreds of thousands of people shared the post, which brought attention to the Church of Scientology's relief efforts and provided an opportunity for fundraising.