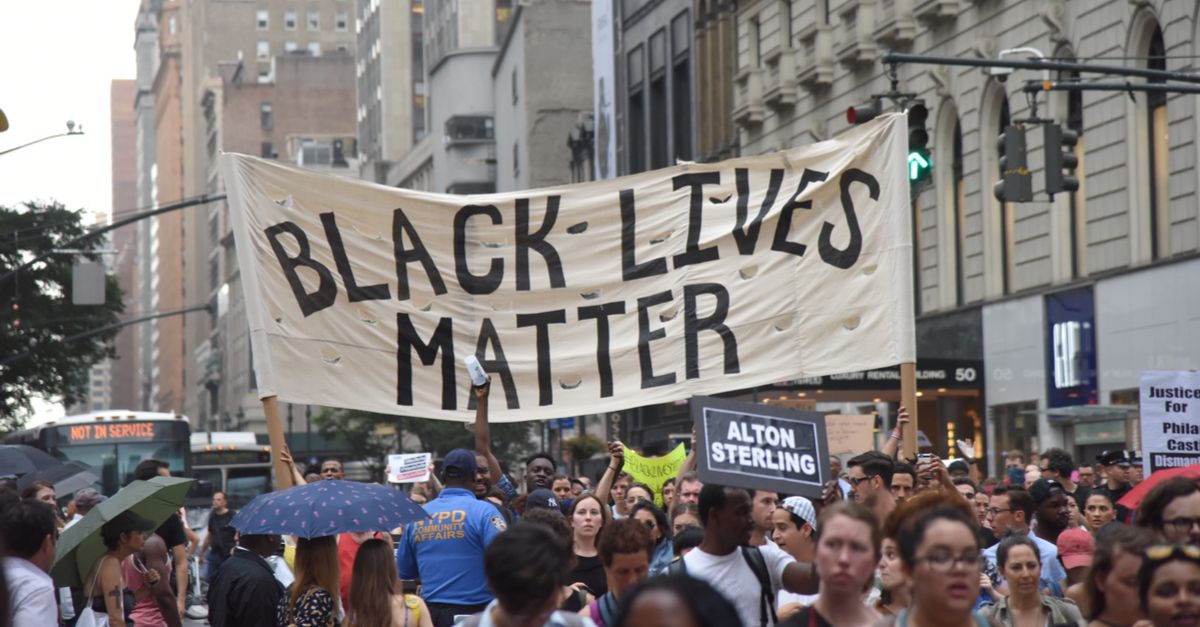 On 28 September 2017 a federal judge ruled in a lawsuit brought by a police officer who claimed he was hit with a rock during 2016 protests that the Black Lives Matter collective cannot be sued.

The suit's plaintiff was an unnamed police officer in Baton Rouge, and the case was filed in relation to demonstrations over the July 2016 death of Alton Sterling, an African American man who was pinned to the ground and shot by police officers:

The suing Baton Rouge police officer, who remained unnamed in the lawsuit, said he was hit by concrete or rock-like objects while responding to a demonstration led by DeRay McKesson for Black Lives Matter and had "several serious injuries," according to court documents.

The injured officer said Mckesson and Black Lives Matter were liable for his injuries because they were negligent and should have known the protests would turn to riots and become violent.

Louisiana Middle District Judge Brian A. Jackson issued a 24-page-long ruling in the case [PDF]. Among defendants named in the action were Black Lives Matter, the hashtag #BlackLivesMatter, McKesson, Johnetta Elzie, and Alicia Garza. The opinion further held that a hashtag cannot be sued. The case was dismissed with prejudice, and Judge Jackson ruled:

... Plaintiff therefore is attempting to sue a hashtag for damages in tort. For reasons that should be obvious, a hashtag – which is an expression that categorizes or classifies a person’s thought – is not a “juridical person” and therefore lacks the capacity to be sued.

With respect to the plea for relief involving Mckesson, the judge ruled that participation in the demonstrations constituted protected speech:

Setting aside his conclusory allegations, Plaintiff has pleaded facts that merely demonstrate that Mckesson exercised his constitutional right to association and that he solely engaged in protected speech at the demonstration that took place in Baton Rouge on July 9, 2016. Because Plaintiff has failed to plead sufficient, nonconclusory factual allegations that would tend to demonstrate that Mckesson exceeded the bounds of protected speech, Mckesson cannot be held liable for the conduct of others with whom he associated, and Plaintiff thus has failed to state a plausible claim for relief against Mckesson.

The ruling examined the anonymous complainant's claim that Mckesson "incited" unrest, determining that "mere conclusory statements" were insufficient upon which to base a cause of action:

Plaintiff, however, merely states – in a conclusory fashion – that Mckesson “incited the violence” and “g[ave] orders,” (id. at ¶¶ 17, 19), but Plaintiff does not state in his Complaint how Mckesson allegedly incited violence or what orders he allegedly was giving. Therefore, the Complaint contains a “[t]hreadbare recital[] of the elements” of a cause of action against Mckesson, which Plaintiff only has “supported [with] mere conclusory statements,” and therefore Plaintiff’s Complaint does not “contain sufficient factual matter, accepted as true, to ‘state a claim to relief that is plausible on its face.’”

Further, Plaintiff has not pleaded sufficient factual allegations regarding Mckesson’s public speech to state a cause of action against Mckesson based on that speech. The only public speech to which Plaintiff cites in his Complaint is a one sentence statement that Mckesson allegedly made to The New York Times: “The police want protestors to be too afraid to protest.” Mckesson’s statement does not advocate – or make any reference to – violence of any kind, and even if the statement did, “mere advocacy of the use of force or violence does not remove speech from the protection of the First Amendment.” Claiborne Hardware, 458 U.S. at 927. This statement falls far short of being “likely to incite lawless action,” which Plaintiff would have to prove to hold Mckesson liable based on his public speech.

The ruling also said that the plaintiff alleged that Mckesson said in a private conversation that he wanted to use the protests to spark the declaration of martial law:

Plaintiff seeks to supplement his Complaint with allegations that Mckesson (1) made a statement on a television news program, in which he allegedly “justified the violence” that occurred at a demonstration in Baltimore, Maryland, (id. at ¶ 9); (2) engaged in a private conversation that allegedly “shows an intent to use protests to have ‘martial law’ declared nationwide through protests[."]

We contacted Mckesson in July 2016 about rumors that Black Lives Matter hoped to influence martial law; Mckesson affirmed that the purported private messages were entirely fabricated.

The court granted Mckesson's motion to dismiss the suit and denied the plaintiff's motion to amend his complaint, determining the facts of the case demonstrated "either a gross lack of understanding of the concept of capacity or bad faith":

For the reasons stated above, the Court finds that Plaintiff has failed to state a plausible claim for relief against either Mckesson or “Black Lives Matter,” the only Defendants named in Plaintiff’s initial Complaint ... Under normal circumstances, the Court would dismiss this matter without prejudice to provide Plaintiff with an opportunity to ameliorate the deficiencies that the Court has identified in his Complaint.

Plaintiff has had ample opportunity, however, following the briefing and argument on Defendant’s Rule 12 and Rule 9 Motions to demonstrate to the Court that he can state a plausible claim for relief against an individual or entity. In response to the arguments raised by Mckesson in his Motions and by the Court during oral argument on the Motions, Plaintiff nonetheless produced a Proposed Amended Complaint that not only fails to state a plausible claim for relief against any of the named Defendants, but that also attempts to hold a hashtag liable for damages in tort. The Court therefore finds that granting leave to Plaintiff to attempt to file a Second Proposed Amended Complaint would be futile. The Court also notes that Plaintiff’s attempt to bring suit against a social movement and a hashtag evinces either a gross lack of understanding of the concept of capacity or bad faith, which would be an independent ground to deny Plaintiff leave to file a Second Proposed Amended Complaint. The Court therefore shall dismiss this matter with prejudice.

In response to the ruling, Mckesson told reporters:

It’s clear that I did nothing wrong that day and that the police were the only violent people in the streets. The movement began as a call to end violence and that call remains the same today.