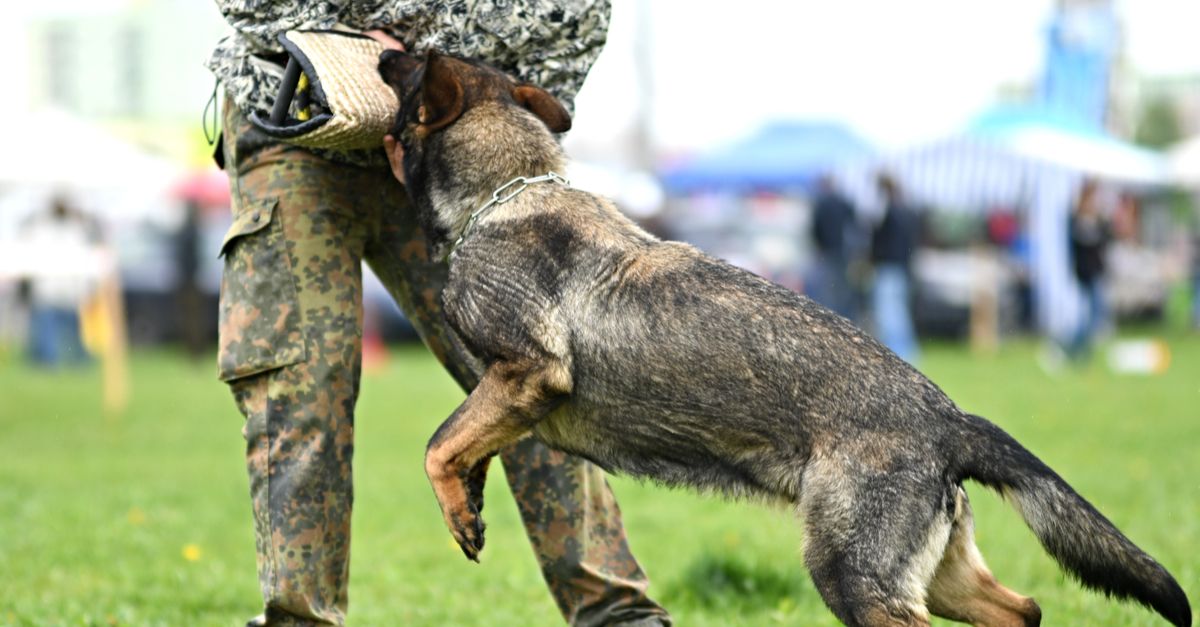 A mothers' advocacy group is demanding answers from officials in San Diego, California after footage circulated online of a local police dog biting a man's arm then refusing to let go even after the man was handcuffed.

One video, which received both local and national coverage, shows 26-year-old Karond Cheatum on the ground and handcuffed as the dog maintains its bite on his arm. A witness can be heard saying, "Why can't you call your dog off?"

Initial reporting on the 9 July 2017 encounter misidentified Cheatum, but San Diego District Attorney Summer Stephans' office confirmed to us on 13 July 2017 that it was Cheatum who was in the video and taken into custody.

One police officer can be seen trying to pull the dog off of Cheatum, initially to no avail. Two other officers can be seen arriving on the scene and holding Cheatum's legs to the ground. After 31 seconds in the video, the dog is pulled off of Cheatum.

A separate 10-second video shows the dog biting Cheatum's arm as Cheatum drops to the ground after being ordered by Estrada. The dog maintains its grip while the officer orders Cheatum, "Show me your hand."

Police said that the dog was dispatched after "multiple people" contacted dispatchers alerting them to Cheatum's "erratic" behavior. He was allegedly challenging people to fights, running in and out of traffic, and jumping on cars.

A police spokesperson, Lt. Scott Wahl, said that the video did not fully capture the encounter:

While these videos can be graphic in nature to view, keep in mind our canines are extremely effective at deescalating situations and preventing elevated levels of force to take people into custody.

Wahl also said that police dogs are not trained to release through the use of a verbal command. Instead, he said, officers are taught to apply pressure to their animals' jaws once they have a suspect in handcuffs:

Sometimes it takes a bit to get into the right position. It's not a perfect, sterile environment where you push a button and it happens.

We contacted the department seeking a follow-up comment but were referred to Stephans' office. Her spokesperson, Tanya Sierra, did not comment citing the ongoing investigation into the encounter.

Following the spread of the two videos, the activist group Moms of Black Boys United for Social Change demanded that any body camera footage from the scene be released. Laila Aziz, a member of the group's policy committee, is also demanding that Stephans investigate and prosecute the officer seen handling the dog for excessive force.

The group states on its website that founder Depelsha Thomas McGruder formed the organization through a private Facebook group she put together after watching footage of the extrajudicial killings of Philando Castile in Minnesota and Alton Sterling in Louisiana. According to MOBB, it now has more than 176,000 members around the United States.

On 18 July 2017 another group, the San Diego and Imperial County chapter of the National Action Network (NAN), called for the dog involved in the encounter to be removed from service and for the release of any body camera footage that was captured at the scene. Rev. Shane Harris, the chapter's president, said during a press conference:

We very clearly want Police Chief Shelley Zimmerman to know that [she] will not get away with this to any extent. We are on this from the very start to the very finish, and we will proceed to the fight for justice for Korand Cheatum, because what happened to Korand that day, it was clearly unjust, and it was clearly excessive force.

Cheatum was taken to a local hospital where he was arraigned and charged with making a criminal threat, robbery, vandalism over $400, attempting to unlawfully take and drive a vehicle, and resisting arrest. He pleaded not guilty and his bail was set at $150,000. Cheatum's next court appearance is scheduled for 21 July 2017.

Updated with comments from the National Action Network.