Though perhaps imbued with more relevance in light of events on the Korean Peninsula, the test had been planned long before North Korean missile activity. 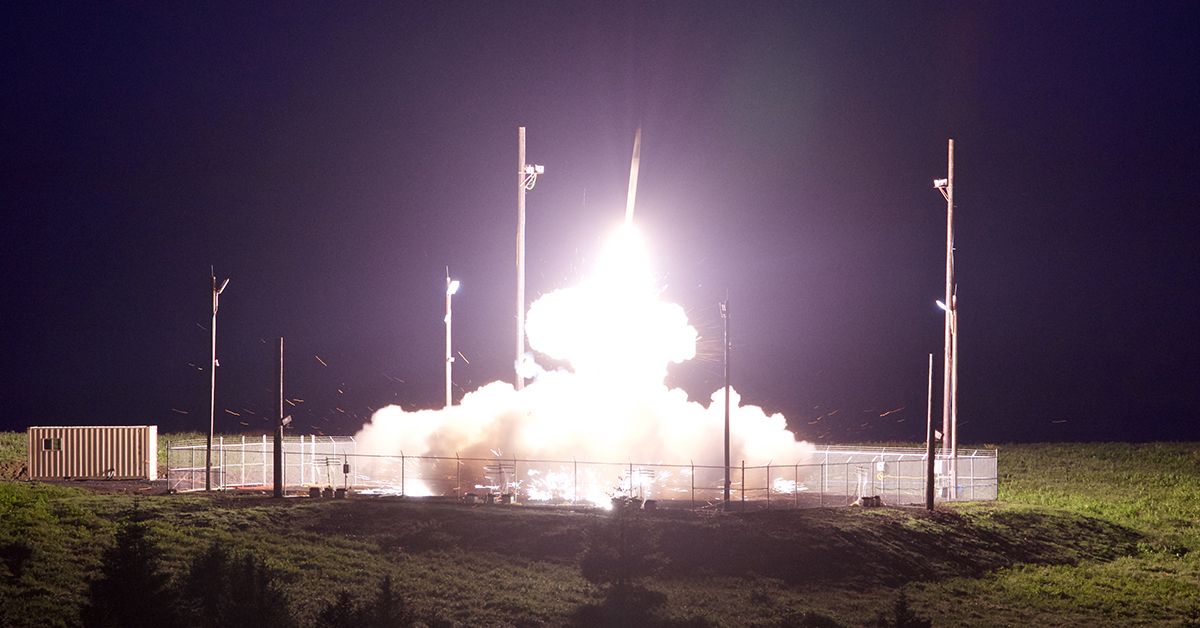 On 11 July 2017, the United States Missile Defense Agency announced a successful test of the their Terminal High Altitude Area Defense (THAAD) system, which is designed to detect, intercept, and destroy intermediate range intercontinental ballistic missiles before they reach a target on US soil:

A ballistic missile target was air-launched by a U.S. Air Force C-17 over the Pacific Ocean north of Hawaii. A THAAD weapon system located at PSCA in Kodiak, Alaska, detected, tracked and intercepted the target.

Preliminary indications are that planned flight test objectives were achieved and the threat-representative, intermediate-range ballistic missile (IRBM) target was successfully intercepted by the THAAD weapon system.

This drill, which has been planned for months, was the 14th successful test of this specific aspect of the Missile Defense System, which is designed to operate as a sort of final line of defense if earlier portions of the system are unsuccessful in destroying a projectile:

The terminal phase is very short and begins once the missile reenters the atmosphere. It is the last opportunity to make an intercept before the warhead reaches its target. Intercepting an incoming warhead during this phase is difficult and the least desirable of the phases because there is little margin for error and the intercept will occur close to the intended target.

This program, as Reuters noted, has taken on increasing relevance given the recent and purportedly successful North Korean launch of their own ballistic missile, but this test is not a direct reaction to that event.

That increased relevance, however, perhaps translated to poor coverage of the test. Numerous outlets crafted headlines that made it sound like a missile had actually been fired at the United States by a foreign power, neglecting to make it clear the event was a planned test and the projectile fired by the U.S. military.

One notable and alarming-looking tweet came from the Twitter account of the Fox News morning program “Fox and Friends”, presenting a Fox News Alert with a headline image reading "U.S. Intercepts Another Incoming Missile": Another headline failing to mention the test aspect while playing up the North Korean threat came from the Daily Caller, with the headline: “US Missile Defense System Achieves Successful Intercept Amid Rising Tensions With North Korea.”

THAAD has been deployed in both the United States and allied countries since 2008 (including South Korea since March 2017), and the system is regularly tested in response to evolving threats around the world:

Testing must account for the ever-changing ballistic missile threat and the latest technological developments. Ground and flight tests provide data needed for highly advanced modeling and simulation activities that allow us to measure and predict the performance of all missile defense technologies. Successful flight tests, in particular, give the warfighter greater confidence in the system’s capabilities.

I couldn’t be more proud of the government and contractor team who executed this flight test today [...]

This test further demonstrates the capabilities of the THAAD weapon system and its ability to intercept and destroy ballistic missile threats. THAAD continues to protect our citizens, deployed forces and allies from a real and growing threat.