Who Is the Naked Man in the Mystery Shark Picture?

Florida football coach Jim McElwain and sandwich chain founder Jimmy John Liautaud have both denied they are the person depicted in the viral photograph. 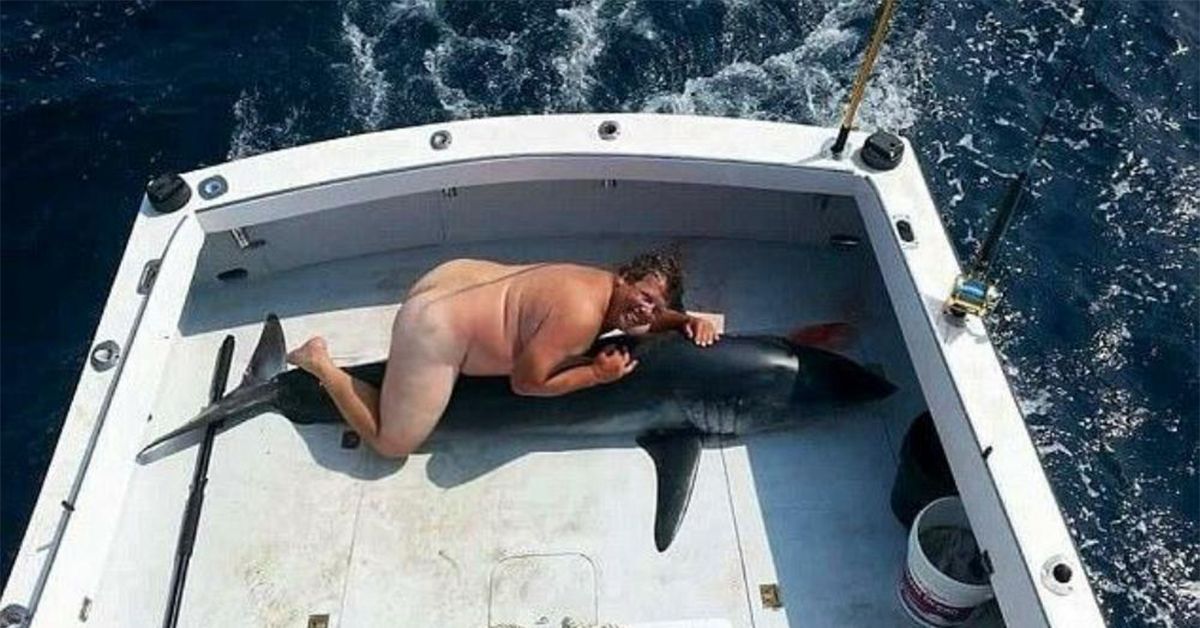 In May 2017, social media users began encountering a bizarre photograph of a grinning naked man straddling a shark stretched out on the deck of a boat, in a pose of (sexual) conquest. As shared online, the photograph typically lacked any context of when, where, and why it was taken — and, most important to the curiosity of viewers, it didn't identify the man posed atop the shark:

However, McElwain denied, through a university spokesperson, that he was the man on the shark:

Deadspin asked one source that might be in the know: The University of Florida. A spokesperson for the school’s athletics department said that McElwain, who became aware of the photo over the weekend, was not the man in it. “He’s told us it’s not him,” the spokesperson said.

McElwain also asserted, in an on-camera interview, that he did not know who the person in picture was:

“Well, first and foremost, I don’t know who it is, but it isn’t me,” McElwain said.

“Clearly,” Orlando Sentinel reporter Edgar Thompson replied. “I mean, what’s your feeling in general, just that something like this could even get out there and become a story?”

“I guess that’s for you guys to answer,” McElwain answered. “You know, in the world we live, what is a story? I just know this: It isn’t me.”

Another popular candidate was sandwich chain founder Jimmy John Liautaud, who bears a resemblance to the man in the photograph and has drawn the ire of some critics for having taken part in big-game hunts involving the killing of animals such as elephants, rhinos, and leopards (a pastime Liautaud has since maintained he has abandoned: However, Liautaud has also denied through a spokesperson that he is the man depicted in the viral photograph: "A spokesperson for Jimmy John’s told Deadspin that the man in the photo was absolutely not Liautaud, and had nothing to do with Jimmy John’s."

The Orlando Sentinel reported that the photographs were believed to be two years old and depicted a former New York City police officer:

The naked guy on the shark may have finally been identified, and it is reportedly a man named “Shawn” from upstate New York who is a former New York City police officer. And, get this, he was was going to meet with Florida Gators coach Jim McElwain to share a laugh about the infamous picture.

“This guy lives in upstate New York, that photo was taken two years ago off the shores of Long Island — not in Florida,” Pingalore said. “I have the man that’s fully clothed that’s naked on the shark, on the boat. Yes, normal photographs.”

Pingalore said a friend of the naked man contacted him this week and has sent him additional photos. Pingalore says he’s been told the story of how the naked man got on the shark and how the man now fears for his life.

Pingalore said the shark picture has been around for a couple of years, and also explained why the photo was taken in the first place.

He said the photo was meant to be a parody. “They were mocking, according to this gentlemen, I guess in the UK there’s some websites that naked women get on sharks, so they were trying to mock what women were doing with sharks.”