Did President Trump’s Lawyers Send a Teen a Cease and Desist Letter Over TrumpScratch.com?

Details of a viral claim that President Trump took legal action against a teen's kitten-punch web site don't check out. 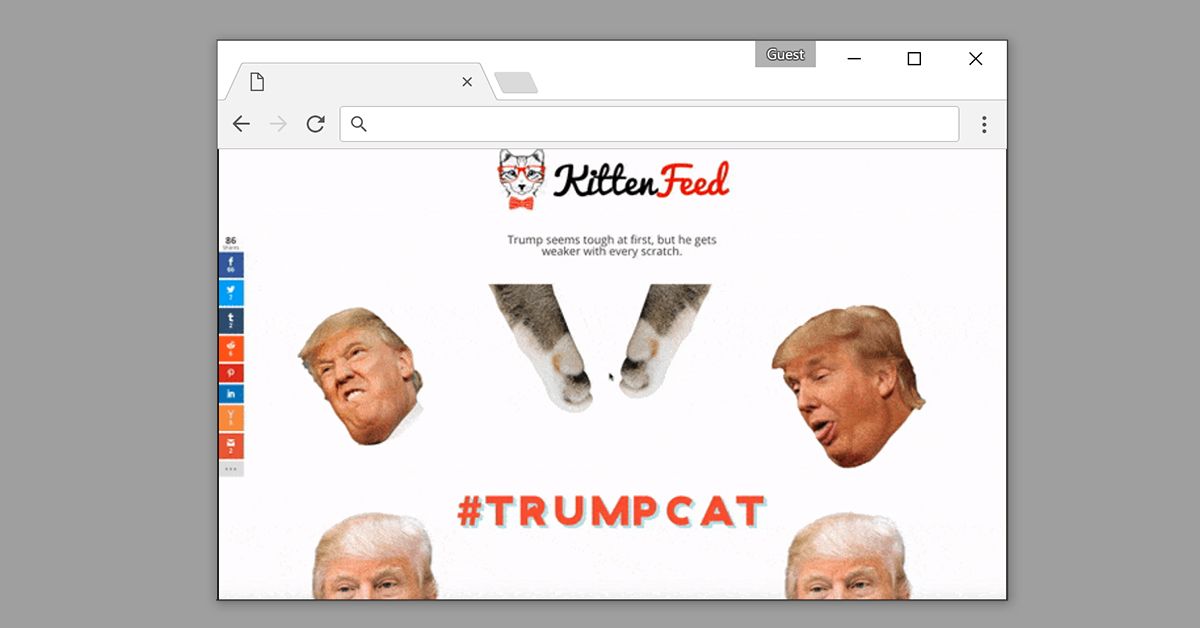 On 21 March 2017, the New York Observer and the Hollywood Reporter published articles about a teen coder named Lucy and cease and desist letters she reportedly received from representatives of President Trump over a web site she had created that enabled users to virtually "punch" the Commander-in-Chief with kitten paws:

From viral videos to scores of memes, it's no secret cats dominate the internet — but President Donald Trump's legal team apparently wasted no time bearing its claws for a fight with a teenager over one kitten-centric website.

Lucy, the 17-year-old behind kittenfeed.com, tells The Hollywood Reporter she's received a cease and desist letter over the site — which allows users to virtually scratch at four photos of Trump's head using a cat's paws. The website launched in February, and within its first few weeks only had about 1,200 visitors, but it was enough to catch the attention of the White House.

The San Francisco-based teen developed the site for fun while applying for web developer jobs. The original domain name was trumpscratch.com, but she changed it after receiving a March 1 cease and desist letter from The Trump Organization. The letter claims her site infringed on the "internationally known and famous" Trump trademark.

She says she received another letter after the domain name change because her site still linked to an anti-Trump shirt that is available for purchase on Amazon. Lucy removed that link, and hasn't heard anything from the campaign since.

"I really just want people to be aware that this is a president who's clearly more concerned about what people think of him than doing things of substance," says Lucy.

According to Observer, "Lucy" created TrumpScratch.com, and "three weeks after the site went live, Lucy was served a cease and desist letter from Trump's general counsel stationed in Trump Tower on Fifth Avenue in NYC":

Guided by a family lawyer, Lucy changed the name of the site to KittenFeed.com

“But after changing, they still came at me,” she said ... she’s furious out of principle.

“It’s so sad that his administration is focused more on being liked, burying real news and taking down sites like mine as they supposedly make him look bad,” she said.

After changing the name, Lucy and her lawyer haven’t responded to the Trump counsel and are currently waiting to see what happens. Even stranger, KittenFeed.com — the domain Lucy supposedly had to move her Trump-infringing web site to after receiving cease and desist letters — was last registered three weeks before TrumpScratch.com was: The supposed replacement site for TrumpScratch.com, KittenFeed.com, greets visitors with kitten paws and the President's face along with an auto-played version of Rick Astley's song "Never Gonna Give You Up" — a long-running Internet joke known as "Rickrolling" that essentially means "Ha, ha, you got fooled!":

The Observer later updated their article to note that they had contacted representatives for President Trump about the story, who responded that they had sent no such letter:

“This is completely false. No such letter was ever sent by us.”

Above the Law also noted that although the cease and desist letters reportedly received by Lucy from the Trump camp were described in the two articles, no one had yet posted actual copies of either of those letters:

Oddly enough, neither [the Observer nor the Hollywood Reporter] has posted a copy of either of the cease-and-desist letters that were allegedly sent to Lucy by Garten

Of course, while it’s entirely possible that Garten’s statement [about having sent no such letters] is entirely untrue — in fact, given what’s happened over the course of Trump’s presidency thus far, the denial itself is unsurprising — this got us to wondering: How easy would it be to create a fake cease-and-desist letter from Donald Trump’s general counsel? Apparently it’s very easy, as much of the same language that was used in the C&D letter that was allegedly sent to Lucy is present in several previous C&D letters sent by Garten, copies of which have been posted online.

Indeed, the following day the Hollywood Reporter posted an image of one of the cease and desist letters, along with an admission that they now had "significant doubts about [its] authenticity" and were therefore retracting their original article:

The Trump Organization is saying its top lawyer did not send a cease-and-desist letter to the creator of a cat website that allows visitors to scratch at photos of President Donald Trump's head.

The Hollywood Reporter now has significant doubts about the authenticity of the letter that was initially provided to media outlets by Lucy, who says she is a 17-year-old based in San Francisco and the proprietor of Kittenfeed.com. The New York Observer first reported on the letter and THR followed with its own report, which it is retracting and adding a correction to the article.

"It's a fake. This letter did not come from us," Alan Garten, the chief legal officer at the Trump Organization, said in an email to THR.

As Jacon Sullum wrote in Reason about the seeming hoax:

Anti-Trump bias is not the only reason this hoax succeeded. The story was accepted because it was consistent with what we know about Trump's character from his behavior before and after he took office. He is an amazingly vain, petty, and thin-skinned man, the sort who publicly brags about the size of his penis and the size of his inauguration audience, who files frivolous lawsuits against people who insult, mock, or diminish him, and who has never hesitated to bully critics with threatening letters from his lawyers.

Given Trump's long history of bullying people who make him look bad, the idea that he would threaten to sue a teenager over a silly website is entirely within the realm of possibility. And given his long history of flagrantly misrepresenting reality, the fact that a spokesman denied the story might almost be considered a confirmation.

None of this is meant to excuse the reporters and editors who thought this story was too good to check. To the contrary, the episode provides a much-needed lesson in how easily journalists can be led astray by their preconceptions, even when those preconceptions are well-grounded in fact.

We likewise contacted Observer writer Sage Lazzaro for further information about "Lucy" and her site but did not receive a response.