Palestinian-born activist Rasmea Yousef Odeh and her supporters maintain that her confession to a terrorist bombing in 1969 was a false one extracted under torture. 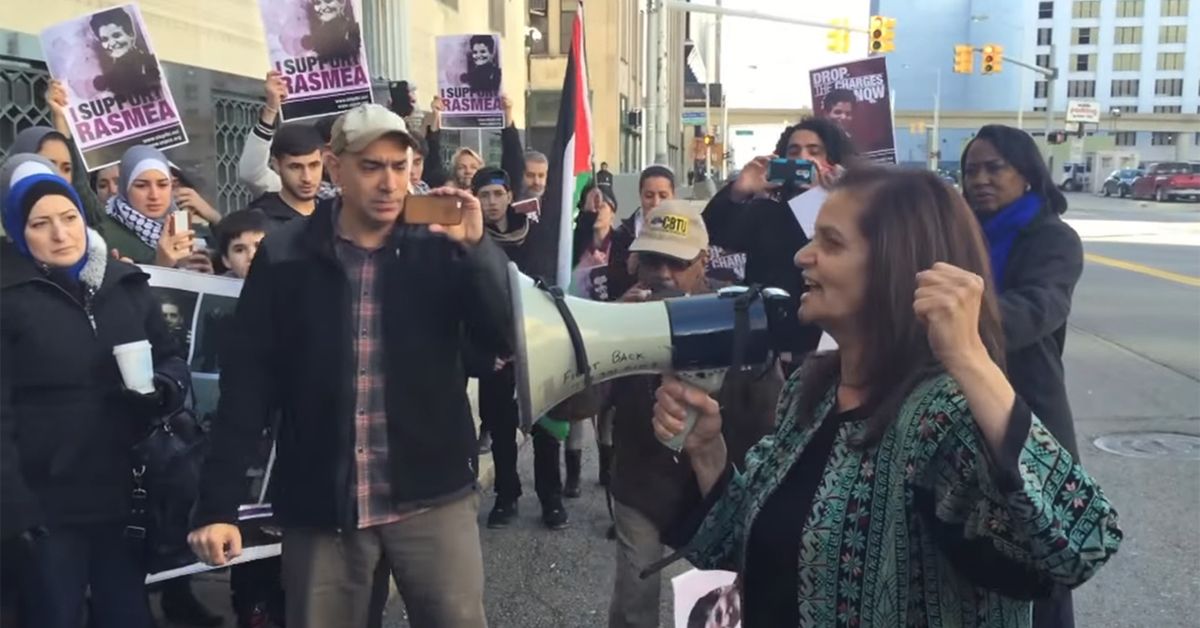 Rasmea Yousef Odeh, a 69-year-old Palestinian-American activist and one of the organizers of "A Day Without a Woman," a worldwide strike planned for International Women's Day on 8 March 2017, was convicted some 47 years ago of participating in a deadly terrorist bombing, multiple news reports and court documents confirm.

Two Hebrew University students were killed in the 1969 blast, which took place at a Jerusalem supermarket. After being convicted in a military court of that and another bombing at the British Consulate, and serving 10 years of a life sentence in an Israeli prison, Odeh was released in a prisoner exchange in 1979.

Odeh and her supporters maintain she was wrongly convicted based on a false confession extracted under torture, as detailed in an op-ed published by The Hill:

In 1979, Odeh testified before a UN special committee in Geneva that as a 21-year-old university student, she was arrested from her home in Ramallah in the middle of the night by Israeli soldiers who "beat me without asking me a single question." She was brought to an Israeli jail in Jerusalem where "they beat me with sticks, plastic sticks, and with a metal bar. They beat me on the head and I fainted as a result of these beatings. They woke me up several times by throwing cold water in my face and then started all over again."

In addition to this physical torture, Odeh also faced sexual torture. Her father, a U.S. citizen, was also arrested and beaten, "and once they brought in my father and tried to force him under blows to take off his clothes and have sexual relations with me." Later, interrogators "tore my clothes off me while my hands were still tied behind my back. They threw me to the ground completely naked and the room was full of a dozen or so interrogators and soldiers who looked at me and laughed sarcastically as if they were looking at a comedy or a film. Obviously they started touching my body." In her father’s presence, interrogators threatened to "violate me" and "tried to introduce a stick to break my maidenhead [hymen]." Shackled naked from the ceiling, interrogators "tied my legs, which were spread-eagled, and they started to beat me with their hands and also with cudgels."

Odeh testified that these tortures lasted 45 days. Finally, fearing "that my father might lose his life from one moment to the next" because of the tortures he was enduring, Odeh readied herself "to make the confession that they wanted, so that they would leave my father alone." Her interrogators accused her of planting a bomb in a Jerusalem supermarket, an act which Odeh testified she "never carried out." The interrogators "realized that perfectly well" because they brought her to the supermarket "and asked me to point out where I had put the explosive. Of course, I didn't know the place and I said 'where exactly do you want me to show you where I put this explosive charge?' So they showed me where the explosion had taken place and I actually pointed out that place without being able to give any details of the operation. I didn't even know how the operation had taken place."

A 23 January 1970 report in the Jerusalem Post said Rasmea Odeh and the four other people accused of the bombings were members of the Popular Front for the Liberation of Palestine, a designated terrorist organization. The court rejected her claims of torture "for lack of evidence." Exhibits presented at the trial, which lasted six months and was reportedly attended by an International Red Cross observer, included physical evidence such as bomb making materials found at Odeh's home. She was sentenced on 22 January 1970.

When Odeh emigrated to the U.S. in the mid-1990s, she failed to admit she had a criminal record, leading to her indictment and arrest in October 2013. She was tried for providing false information on her immigration application in U.S. District Court, where presiding Judge Gershwin Drain disallowed testimony about Odeh's torture and the post-traumatic stress disorder (PTSD) she suffered, saying they were unrelated to her lying on her immigration papers.

Odeh was convicted of immigration fraud and sentenced to 18 months in prison by Drain, who said she had committed both perjury and acts of terrorism, according to a recap of the sentencing hearing in the Detroit Free Press:

"You lied under oath," Drain said. Referring to a Marxist Palestinian group the U.S. State Department labels a terrorist organization, Drain added: "She was a member of the Popular Front for the Liberation of Palestine. I think she was involved in some terrorist activity."

Odeh successfully appealed that conviction, however, and was granted a new trial, set for May 2017. Meanwhile, she remained free on bail and was listed as an organizer of the 8 March 2017 Day Without a Woman strike.

On 23 March 2017, Associated Press reported that Odeh agreed to plead guilty to providing false information on her immigration application in exchange for being allowed to leave the country instead of serving a prison sentence.

Our attempts to contact Rasmea Odeh or a representative for comment via her attorneys and the organizers of the Day Without a Women strike were unsuccessful.