People traveling to the United States were blocked or detained after arriving from countries singled out by the president's executive order. 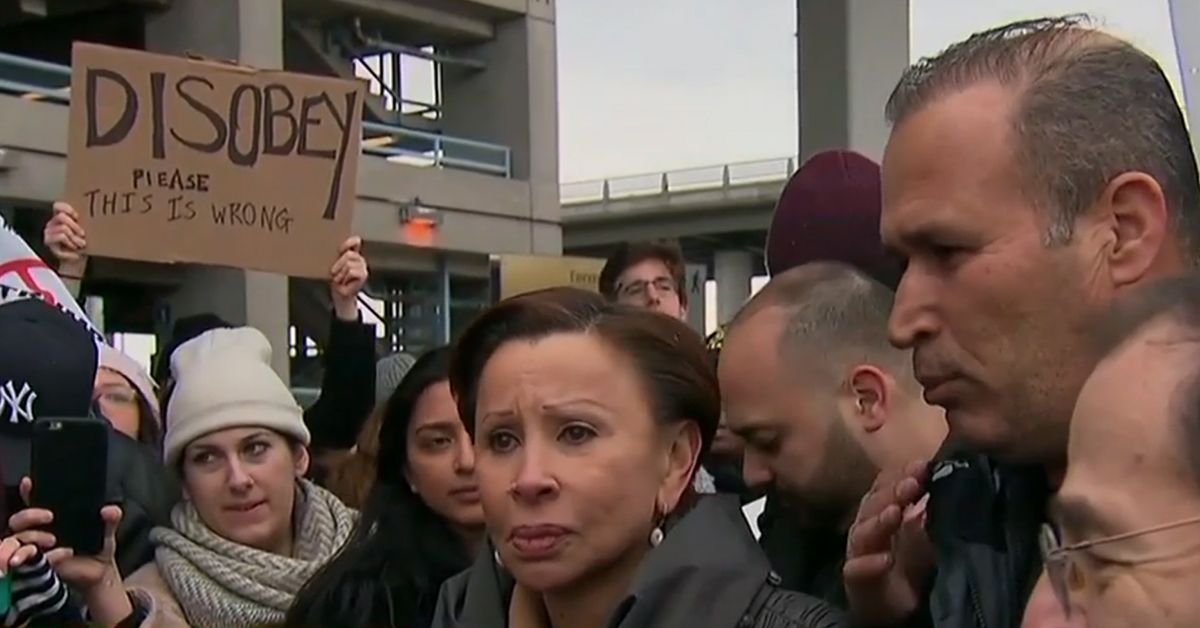 Demonstrators angry over the detention of travelers at John F. Kennedy International Airport gathered at the busy travel hub on 28 January 2017, denouncing and executive order by President Donald Trump banning travel from some predominantly Muslim countries.

Iraqi man to crowd gathered to protest his detainment at JFK: "This is humanity. This is the soul of America" https://t.co/7vPbQED3qX

On 28 January 2017, reports of travelers stranded in foreign countries but also detained at American airports despite being fully vetted with proper travel documents provoked an angry response from some. The executive order barred Syrian refugees indefinitely and blocked for 90 days nationals from Iran, Iraq, Libya, Somalia, Sudan, Syria and Yemen. It also suspended entry for all refugees for 120 days, regardless of citizenship. According to the New York Times, the Department of Homeland Security said even green card holders from the countries named are barred from reentering the United States, leaving some who were traveling abroad over the winter holiday stranded:

At least one case quickly prompted a legal challenge as lawyers representing two Iraqi refugees held at Kennedy International Airport in New York filed a motion early Saturday seeking to have their clients released. They also filed a motion for class certification, in an effort to represent all refugees and other immigrants who they said were being unlawfully detained at ports of entry.

Shortly after noon on Saturday, Hameed Khalid Darweesh, an interpreter who worked on behalf of the United States government in Iraq, was released. After nearly 19 hours of detention, Mr. Darweesh began to cry as he spoke to reporters, putting his hands behind his back and miming handcuffs.

“What I do for this country? They put the cuffs on,” Mr. Darweesh said. “You know how many soldiers I touch by this hand?”...

“How do I get back home now?” said Daria Zeynalia, a green card holder who was visiting family in Iran. He had rented a house and leased a car, and would be eligible for citizenship in November. “What about my job? If I can’t go back soon, I’ll lose everything.”

Others affected by the ban include a cardiovascular researcher at Harvard and a Syrian family that had been sponsored by a synagogue. Daniel W. Drezner, professor of international politics at the Fletcher School of Law and Diplomacy, whose synagogue had sponsored that family, had angry words for the Trump administration on Twitter, asking, "Who drafted and advised on this idiocy?" In an e-mail sent to us on 28 January 2017, Drezner elaborated on his words:

My reaction is based on the notion that the EO obviously harms American values by restricting refugee flows for no valid reason (given the already stringent vetting procedures in place). It harms American interests in multiple ways: 1) Disincentivizing translators and interlocutors on the ground in Iraq or Syria from working with U.S. soldiers and diplomats; 2) Creates a gift-wrapped recruiting tool for ISIS and Al Qaeda; 3) Places an additional burden on U.S. allies and stable Middle East states that will need to absorb additional refugees.

Protesters gathered at JFK chanted phrases like, "No hate, no fear, refugees are welcome here," and "Build a wall, we'll tear it down." The order has already prompted lawsuits, with attorneys filing for class certification to represent all travelers that had been detained at U.S. airports in response to the ban.