Four Government Agencies and One Group of Skeptics Agree: 2016 Was the Warmest Year in Recorded History

American, British, and Japanese agencies (plus an independent research group) have all concluded by different means that 2016 was hotter than any other year for which data exists. 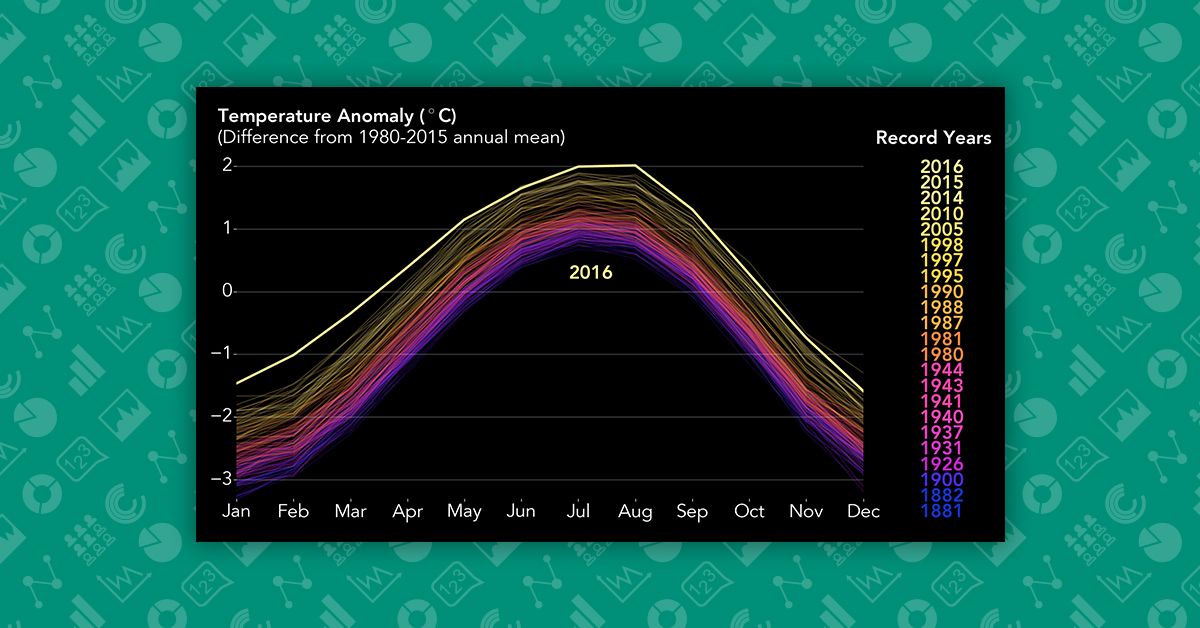 On 18 January 2017, three government agencies — the National Aeronautics and Space Administration (NASA), The National Oceanic and Atmospheric Administration (NOAA), and the UK’s Met Office — each released independent analyses of global sea and land surface data that arrived at the same conclusion: 2016 was the hottest year in recorded human history, and the third straight year in a row to earn that increasingly fleeting honor.

These results are in line with a preliminary analysis performed by the the Japan Meteorological Agency’s Tokyo Climate Center, released on 21 December 2016, which found 2016 to be the hottest year on record.

Also on 18 January 2017, the non-governmental research group Berkeley Earth (which was originally founded to investigate climate researchers’ claims that a group of Berkeley physicists felt merited skepticism)  released the results of their own analysis, which also pegged 2016 as the hottest year on record. However, their analysis disputes the conclusion that the three past years have been warmest, ranking 2010 above 2014.

Both NASA and NOAA looked at the same data, but interpreted it with different algorithms. As described by NASA, that data came in the form of:

Globally-averaged temperatures in 2016 were 1.78 degrees Fahrenheit (0.99 degrees Celsius) warmer than the mid-20th century mean. This makes 2016 the third year in a row to set a new record for global average surface temperatures.

The UK’s MET office (their governmental meteorological office), in concert with scientists from the University of East Anglia’s Climatic Research Unit, used the HadCRUT4 dataset, which includes readings from temperature stations around the world and a large collection of sea surface data from a variety of sources. They concluded:

The preliminary analysis provided by Japan’s Meteorological Agency (their full report is released in February each year) is based on a combination of historical global land temperatures, some of which comes from NOAA reports, and a sea surface dataset they refer to as COBE-SST. They concluded:

The annual anomaly of the global average surface temperature for the year 2016 (i.e. the combined average of the near-surface air temperature over land and the sea surface temperature) is estimated at +0.46°C [This data is complete only through November] above the 1981-2010 average, likely to become the warmest record for the 126-year period since 1891.

Finally, the independent research group Berkeley Earth, which (as we mentioned) was founded by a group of scientists skeptical of some claims made by climate researchers, concluded:

2016 was the warmest year since humans began keeping records, by a wide margin. Global average temperatures were extremely hot in the first few months of the year, pushed up by a large El Nino event. Global surface temperatures dropped in the second half of 2016, yet still show a continuation of global warming. The global warming “pause”, which Berkeley Earth had always stressed was not statistically significant, now appears clearly to have been a temporary fluctuation.

Each of these groups acknowledges the role that El Niño (which releases heat to the atmosphere and which was in effect for much of 2016) played in driving this record, described by NASA:

Phenomena such as El Niño or La Niña, which warm or cool the upper tropical Pacific Ocean and cause corresponding variations in global wind and weather patterns, contribute to short-term variations in global average temperature. A warming El Niño event was in effect for most of 2015 and the first third of 2016. Researchers estimate the direct impact of the natural El Niño warming in the tropical Pacific increased the annual global temperature anomaly for 2016 by 0.2 degrees Fahrenheit (0.12 degrees Celsius).

We have compelling scientific evidence that global warming is real and human caused, but much of what is reported as ‘climate change’ is exaggerated. Headlines that claim storms, droughts, floods, and temperature variability are increasing, are not based on normal scientific standards. We are likely to know better in the upcoming decades, but for now, the results that are most solidly established are that the temperature is increasing and that the increase is caused by human greenhouse emissions.

What is even less controversial is a fact that was confirmed by multiple researchers from all over the world.  As NASA put it:

Earth’s 2016 surface temperatures were the warmest since modern record keeping began in 1880.