Man Spotted Outside a Mosque in Texas with Sign Identifies Self

A man photographed holding a kind sign outside the Islamic Center of Irving, Texas identified himself on Facebook after the image went viral. 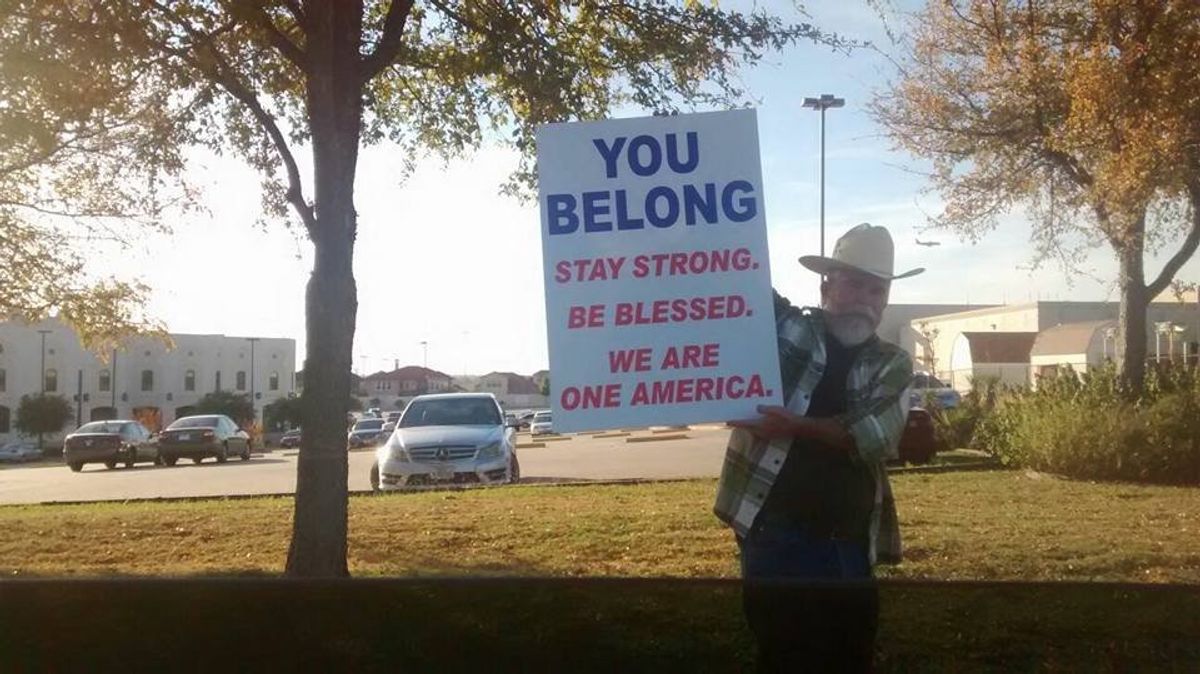 On 26 November 2016, a Reddit user published the above-reproduced photograph and thread titled "Spotted outside a Mosque in Texas today" to the subreddit r/HumansBeingBros; the image was subsequently shared to r/MURICA.

Initially, little context was available for the photograph. It depicted a man in a cowboy hat holding a white sign with red and blue writing. The placard stated:

WE ARE ONE AMERICA.

The photograph was also popular on Twitter, where it appeared on 26 November 2016:

Man outside of a mosque in Texas this morning pic.twitter.com/bsbfW1PkA9

Also on 26 November 2016, Islamic Center of Irving Director of Outreach Nick Pelletier published video of his discussion with the man:

On 28 November 2016, Texan Justin Normand identified himself as the man in the viral photograph. He explained his motivations in a Facebook status update:

I have had the most extraordinary weekend.

Like most everyone I know, I have been in a malaise and at a loss since Election Day. What to do? With myself? With my time? To make things better, or even just to slog through?

I manage a sign shop, and so I had had the urge for a week or so to do this. Friday, I had a couple of spare hours in the afternoon, so I did.

I made a sign, and I drove to the nearest mosque and stood out on the public sidewalk to share the peace with my neighbors. My marginalized, fearful, decent, targeted, Muslim neighbors.

Someone took a picture and posted it, and as of today it’s been viewed millions of times, and shared across various platforms many hundreds of thousands of times.

This is extraordinary and humbling; mainly because what I did isn’t (or shouldn’t be) all that extraordinary.

For me, this wasn’t about expressing agreement; I remain Presbyterian, not Muslim.

After quoting the Bible, Normand reiterated the sentiment on his sign:

These words bespeak the America we all remember, know, love, and are still called upon to be. Especially now.

Lastly, it worked. I felt better for the impact it had on my neighbors. They genuinely needed this encouragement. They need us.

They need all of us. They need you.

We ARE one America.

Speaking to the Dallas Morning News on 29 November 2016, Normand said that while he didn't typically wear a cowboy hat, he did while holding the sign because he recognized that he was symbolic of a segment of Texas that, in his view, the local (and wider) Islamic community needed to hear from.