Depending on which of the many explanations you prefer, this propulsion system violates myriad laws of physics, leaving many skeptical of the findings. 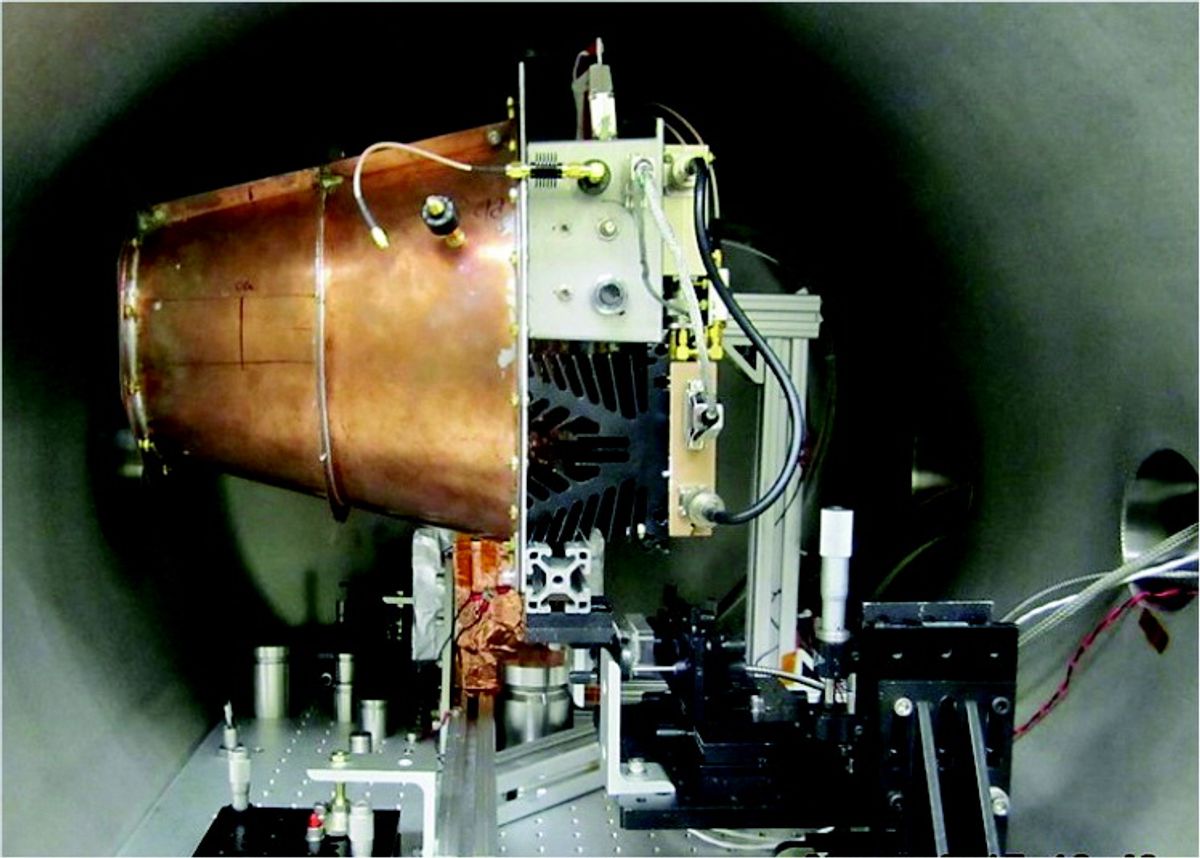 On 17 November 2016, a team of engineers from an experimental research group (nicknamed Eagleworks Laboratories) at NASA’s Johnson Space Center published the results of a test purporting to demonstrate a “reactionless drive” propulsion system in the Journal of Propulsion and Power.

A leaked version of this same paper first appeared on 5 November 2016. While this group has made headlines with announcements of their work in the past, this is the first time their work has survived the peer-review process necessary to get the results published in a scientific journal.

A reactionless drive system is a (usually) theoretical concept for a propulsion system that generates thrust without a propellant, i.e without the expulsion of mass. Such a system would be in violation of Newton’s third law, commonly stated as: "For every action there is an equal and opposite reaction.”

As discussed by Nadia Drake and Michael Greshko in National Geographic:

Weirdly, the EmDrive doesn’t expel anything at all, and that doesn’t make sense in light of Newton’s third law or another tenet of classical mechanics, the conservation of momentum. If the EmDrive moves forward without expelling anything out the back, then there’s no opposing force to explain the thrust. It’s a bit like arguing that a person inside a car could propel it forward by repeatedly hitting the steering wheel, or that the crew of a spaceship could fly the craft to their destination simply by pushing on the walls.

The EmDrive concept has been around since 2006, when British engineer Roger Shawyer first proposed it. The theoretical concept is broadly described by Wired's Eric Hudson:

The theory goes that the thruster on the proposed EmDrive, shaped like a cone, can produce momentum by bouncing around electromagnetic waves in its interior. As these waves hit the larger end of the cone, the photons produce a tiny, tiny force that causes the small end to accelerate in the opposite direction.

In particular, electricity is converted into microwaves, and the microwave photons are fired into the metal cone cavity. It is called EmDrive because it uses electromagnetic propulsion to drive it.

The Eagleworks Laboratories team has been working on this concept for years. They first made viral news headlines when the unpublished results of  previous EmDrive experiment was reported in 2014. Other groups have tried to put the concept into practice too. The researchers’ experimental setup for this 2016 paper is well-summarized by the National Geographic article cited earlier:

In this paper, the team describes how they tested the EmDrive in a near vacuum, similar to what it would encounter in space. Scientists placed the engine on a device called a torsion pendulum, fired it up, and determined how much thrust it generated based on how much it moved. Turns out, the EmDrive is capable of producing 1.2 millinewtons per kilowatt of energy, according to the authors’ estimates.

Is this a lot of thrust? Absolutely not, according to phys.org, but the cumulative effects of the process over time would make it possible to travel across long distances without fuel if the technology were to be scaled up.

Many remain deeply skeptical. A good summary of that skepticism is found in physicist and science writer Chris Lee’s analysis on ArsTechnica, who refers to the device as a “WTF thruster”:

The zombie incarnation of the EM-drive has all the best features of a new technology: it generally violates well-established physical principles, there is a badly outlined suggestion for how it might work, and the data that ostensibly demonstrates that it does work is both sparse and inadequately explained.

Lee interprets the authors’ proposed explanation in that piece, but suggests that some guesswork was involved, as the explanations in the paper were — in his view — lacking:

The idea comes from quantum vacuum fluctuations. Vacuum is not nothing. Instead, it's filled with virtual particles that can become real under the right circumstances. Indeed, there are many measurable phenomena that are explained by virtual particles becoming momentarily real, doing something, and vanishing back into the imagination of the Universe. [...]

The WTF-thruster uses a mechanism to make these particles real and then accelerates them, after which they vanish. In the short time that they are accelerated, however, they generate thrust via back-action. [...]

The reason that these particles are only momentarily real is that the particles are created in pairs that annihilate each other almost immediately, so the virtual universe giveth some energy and immediately yanks it back.

Lee goes on to explain that modern physics adequately explains those types of phenomena, but not on the small scale that the Eagleworks engineers claim:

Under unusual circumstances, you can steal from the virtual universe. At the event horizon of a black hole, for instance, a pair of particles may be created in such a way that they are on either side of the event horizon. One escapes, carrying energy (called Hawking radiation), and one falls into a black hole. Sadly, as dense as the copper used in this device may be, there are no black holes involved in the experiment.

You can also suppress vacuum fluctuations to generate a force. Two conducting plates, separated by a certain distance, restrict which fluctuations are allowed between the plates. Outside, there are no such restrictions. The imbalance between the fluctuations inside and outside the plate provides a net force that pushes the two plates together. Again, this is all well explained by current physical theories.

But the experiment performed by these researchers isn't. No, the WTF-thruster seems to operate on the principle that these momentarily created particles are easy to separate (needed to avoid that paired annihilation issue), because at the boundary of a bit of plastic, the density of vacuum fluctuations changes and therefore... um, "physics" happens?

The authors state in their paper that their presented explanation is not "the dominant view of physics today,” a sentiment echoed by a 2014 research paper arguing that their proposed mechanism is demonstrably impossible. Another criticism of the results discussed by Lee is that there does not appear to be a strong relationship between the amount of microwave energy used and the amount of thrust generated, making the results even more difficult to interpret.

Outside of the theoretical criticism, researchers also have some problems with the experimental set up as well. To the researchers’ credit, they analyze nine potential sources of error (other factors that could explain the apparent thrust), and they found those potential explanations lacking, though they allow that they may have not fully rejected the idea that small variations in temperature caused the results they recorded:

A number of error sources were considered and discussed. Although thermal shift was addressed to a degree with this test campaign, future testing efforts should seek to develop testing approaches that are immune to CG shifts from thermal expansion.

This issue of thermal effects has been a major sticking point for the team, as described by Nathaniel Scharping in Discover magazine:

A prominent criticism of earlier tests was that the heat generated by the device could have been responsible for the apparent movement. Moving the experiment to a vacuum provides a more perfect environment to run tests in.

I suspect that if the thrust isn't noise, it is due to a thermal effect that is unaccounted for. That is, something is radiating in some unexpected way and generating thrust. My suspicion is that it is the copper cavity (most people suspect the amplifier and its enormous heat sink, but I like a dark horse).

The results of the Eagleworks team’s experiment will no doubt be debated for years to come, as its implementation would open up new frontiers in physics and spaceflight. The fact that they were able to publish their results in a peer-reviewed journal is a great leap forward for the team, but the peer review process does not mean the results are necessarily valid.