CNN was widely criticized for an on-screen graphic they displayed during a segment about white supremacy. 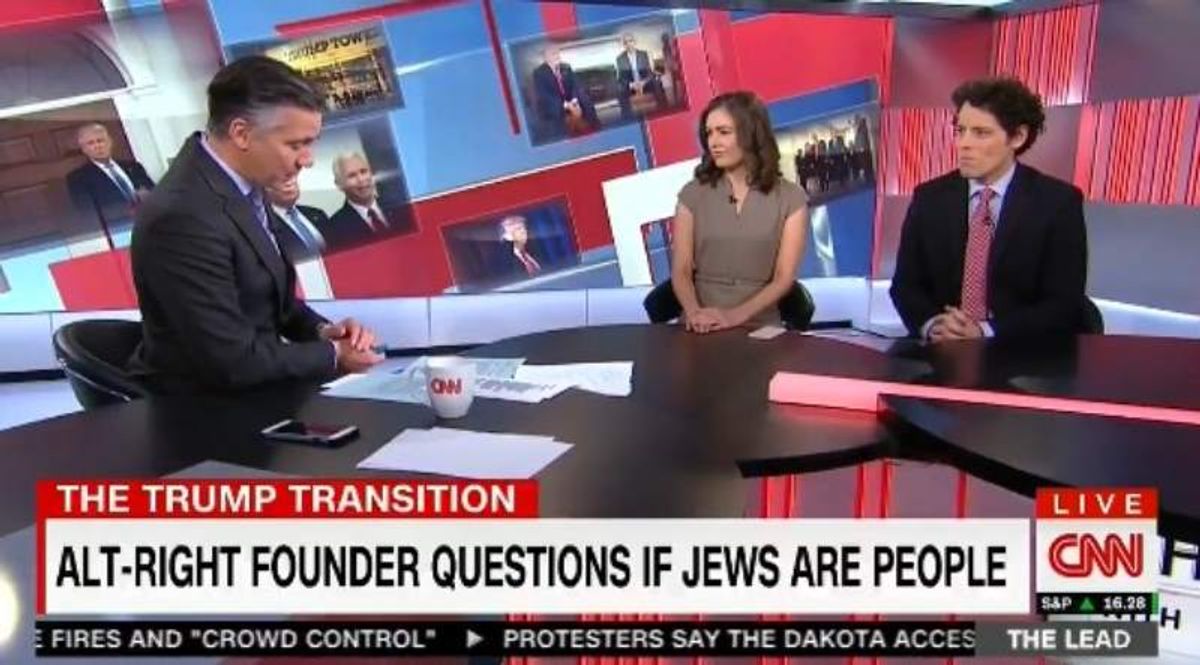 On 21 November 2016, both CNN and Jake Tapper's fill-in host, Jim Sciutto, were criticized after the cable news network aired a segment about a speech given by white nationalist leader Richard Spencer. During the segment, Sciutto described Spencer and his followers as "unabashed white supremacists, racists, [and] anti-Semites":

[Spencer] was spewing, as he often does, what I can only describe as hate-filled garbage. Of Jews, Spencer said — and we'll put this quote up on-screen — "One wonders if these people are people at all, or instead soulless golem animated by some dark power to repeat whatever talking point John Oliver stated the night before."

The remark Sciutto referenced was taken from a speech delivered by Spencer at the annual conference hosted by his organization, the National Policy Institute (NPI), in Washington D.C. on 18 November 2016. But it was CNN's on-screen chyron ("Alt-right founder questions if Jews are people") that was denounced by not only viewers but by Tapper and Sciutto themselves:

@jsthorpe2 yes, I'm off this week and I'm furious about that chyron and my staff has heard from me. Unacceptable.

I agree with @jaketapper fully however that the banner - which we don't write from the chair - was out of line https://t.co/M4aV4W330S

Spencer did refer to "soulless golems" in his speech, a reference to Jewish folklore about beings magically created from clay or mud. But as Reason editor Elizabeth Nolan Brown (among others) pointed out, Spencer's mention of "soulless golems" (which occurs around the 3:00 mark here) was used in the context of questioning the humanity and intelligence of members of the "mainstream media," not specifically that of Jews:

Which is not to say that Spencer and his group are not well-documented white nationalists. Footage from the speech also shows supporters raising their hands in the manner of the Nazi salute, and Spencer smiled when referring to "the mainstream media" as Lügenpresse, a term meaning "lying press" that was commonly used in Nazi-era German propaganda to describe non-party-friendly (e.g., Jewish, Communist, and foreign) news sources.