Vice President-elect Mike Pence's night out at the theater took an unexpected turn when he was booed by audience members and lectured on the importance of diversity by a "Hamilton" cast member. 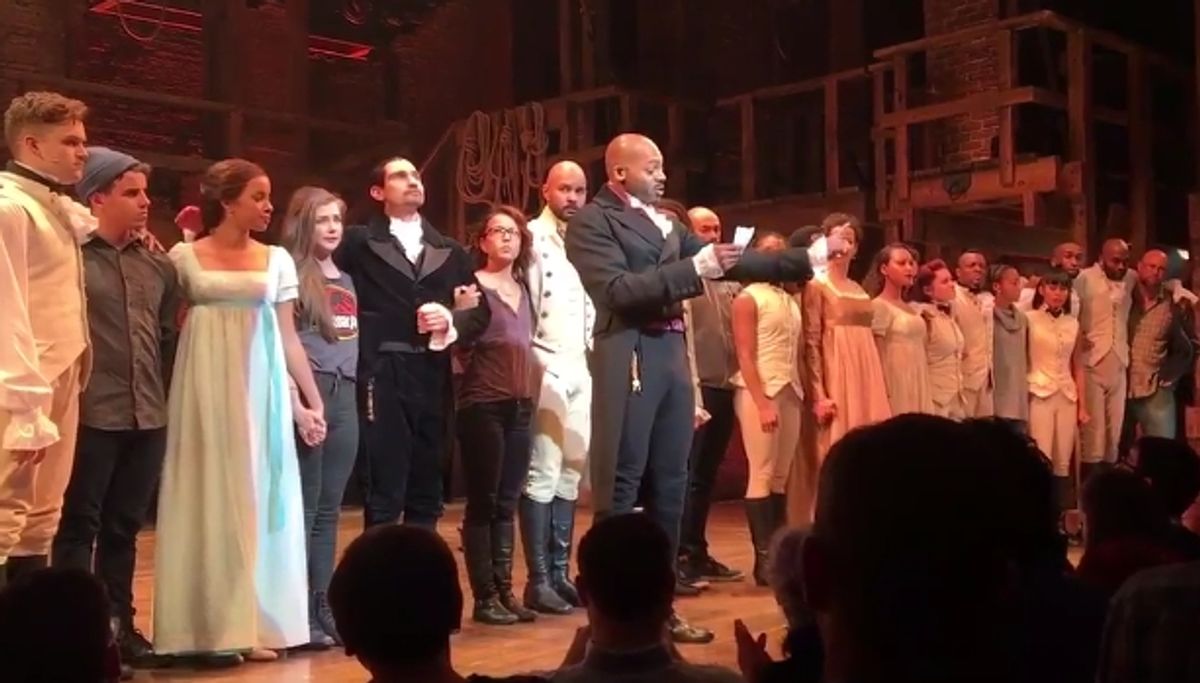 Vice President-elect Mike Pence decided to take in a performance of the hit Broadway show Hamilton in New York City on 18 November 2016, only to find himself booed by audience members upon entering the house and addressed from the stage by a cast member as he exited during a curtain call. Both moments were captured on video and shared via social media.

This was the moment Pence entered and took his seat at Richard Rogers Theatre on West 46th Street:

Here's Pence getting booed as he gets to his seats at Hamilton pic.twitter.com/IRQG68x1sB

And this was the moment Pence was directly addressed by actor Brandon Victor Dixon, who played Aaron Burr in the musical, as the VP-elect rose to depart from the theater:

This is the full text of Dixon's statement:

You know, we have a guest in the audience this evening. Vice President-elect Pence, I see you walking out but I hope you hear just a few more moments. There's nothing to boo, ladies and gentlemen. There's nothing to boo. We're all here sharing a story of love. We have a message for you, sir. We hope that you will hear us out.

And I encourage everybody to pull out your phones and tweet and post, because this message needs to be spread far and wide, OK?

Vice President-elect Pence, we welcome you and we truly thank you for joining us here at Hamilton: An American Musical. We really do.

We sir, we, are the diverse America who are alarmed and anxious that your new administration will not protect us — our planet, our children, our parents — or defend us and uphold our inalienable rights, sir. But we truly hope that this show has inspired you to uphold our American values and to work on behalf of all of us. All of us.

Again, we truly thank you for sharing this show, this wonderful American story told by a diverse group of men and women of different colors, creeds, and orientations.

Pence was on his way to the lobby by the time Dixon began delivering the statement, but a spokesman for Hamilton said the Vice President-elect paused to hear it through before leaving the theater. Pence, a conservative evangelical Christian, was presumably singled out for the impromptu lecture because of his strong stands against rights and protections for members of the LGBT community. Dixon also appeared to be speaking on behalf of ethnic and religious minorities who felt threatened by the the harsh rhetoric of the Trump campaign.

Although Pence said he was not bothered by the incident, President-elect Donald Trump did, accusing the cast of "harassing" him, and demanding, via Twitter, an apology:

Our wonderful future V.P. Mike Pence was harassed last night at the theater by the cast of Hamilton, cameras blazing.This should not happen!

@realDonaldTrump conversation is not harassment sir. And I appreciate @mike_pence for stopping to listen. — Brandon Victor Dixon (@BrandonVDixon) November 19, 2016

And Hamilton's creator, Lin-Manuel Miranda, attempted to wrap it all up by praising Dixon and saying everyone is welcome at the theater:

Proud of @HamiltonMusical. Proud of @BrandonVDixon, for leading with love. And proud to remind you that ALL are welcome at the theater. — Lin-Manuel Miranda (@Lin_Manuel) November 19, 2016

As of this writing, #BoycottHamilton is one of the top trending hashtags on Twitter.