The GOP campaign office in the town of Hillsborough, NC, was hit with arson and vandalism. 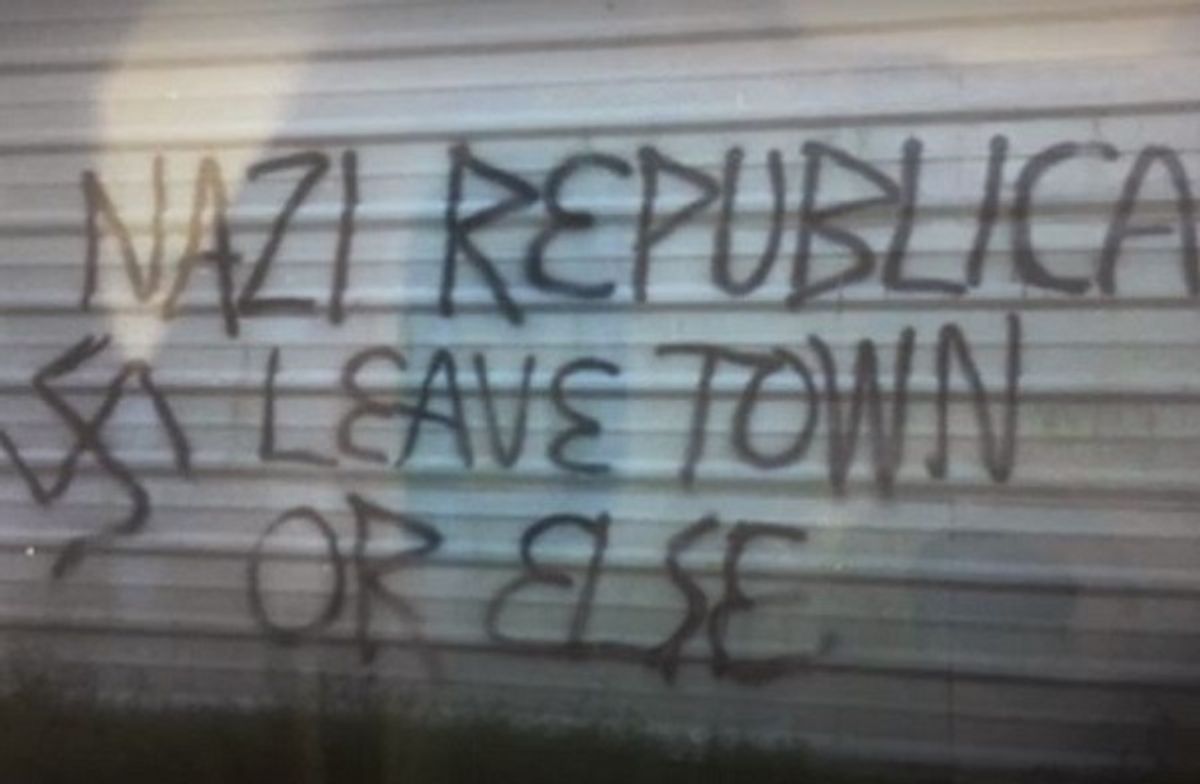 Campaign offices in North Carolina belonging to the Republican party were vandalized sometime overnight on 15 October 2016, according to the local government:

The building, located at 347 Ja-Max Drive in the Shops at Daniel Boone, was struck overnight with graffiti and with a flammable material thrown through a front window of the headquarters. The graffiti — which included a swastika and the words “Nazi Republicans leave town or else” — was spray-painted in black on the side of an adjacent building, Balloons Above Orange, 353 Ja-Max Drive. The damage was discovered by another business owner, who reported it before 9 a.m.

According to Hillsborough police, no one was injured in the incident. The flames appear to have been ignited by what is commonly known as a Molotov cocktail: flammable liquid inside a bottle that explodes when thrown. Police have released the 911 recording from the incident, in which the caller can be heard describing the smell of smoke:

Police believe the vandalism occurred between midnight and 8:54 a.m. on the morning of 16 October 2016. Authorities said they are working with a contingent of state and local investigators, including the Orange County Sheriff's Office the Bureau of Alcohol, Tobacco and Firearms, with support from the Secret Service.

Hillsborough mayor Tom Stevens called the act "hateful" in a statement released the day the attack was discovered:

This highly disturbing act goes far beyond vandalizing property; it willfully threatens our community’s safety via fire, and its hateful message undermines decency, respect and integrity in civic participation. I believe I speak for the overwhelming majority of people who make Hillsborough their home: Acts like this have no place in our community. Our law enforcement officials are responding quickly and thoroughly to investigate this reprehensible act and prosecute the perpetrators.

Republican presidential nominee Donald Trump posted a tweet asserting the vandalism had been perpetrated by "Animals representing Hillary Clinton and Dems in North Carolina," Clinton, Trump's Democratic opponent, tweeted, "The attack on the Orange County HQ is horrific and unacceptable. Very grateful that everyone is safe." Police do not yet have a suspect in the crime.

David Weinberger, a Democrat from Massachusetts, launched a GoFundMe crowdfunding campaign on 16 October 2016 in an effort to help the GOP re-open their office, and he said it took less than 40 minutes for the campaign to reach its fundraising goal of $10,000. Weinberger, an author and technology writer, said on the campaign's GoFundMe page that:

Until an investigation is undertaken, we cannot know who did this or why. No matter the result, this is not how Americans resolve their differences. We talk, we argue, sometimes we march, and most of all we vote. We do not resort to violence by individuals or by mobs.

Police in Carborro, which is south of Hillsborough and just outside Chapel Hill, told us that signs and a pamphlet dispenser in a parking lot near the Orange County Democratic Party offices were marked with anarchist and anti-capitalist-themed graffiti on the same night that the Republican office was vandalized, but they don't believe the two incidents are related and they also don't believe the Democratic office was targeted.

"We don't have any information to suggest it was targeting that specific business," Carrboro police Capt. Chris Atack told us. "There are other busineses in the area, and there's no indication the [DNC] building itself was tagged, or that there was damage to the building."

Atack said the city has a history of anarchist-themed graffiti and that an anarchist book store used to be housed in the parking lot near where the graffiti was found.

We have been in contact with Hillsborough, but at this point we don’t have any information to suggest there’s a connection. We don’t feel what occurred here was any type of threat.

Video from the scene in Hillsborough were posted by the New York Times and can be viewed here: