San Francisco QB Colin Kaepernick made headlines when he refused to stand for the playing of "The Star-Spangled Banner." 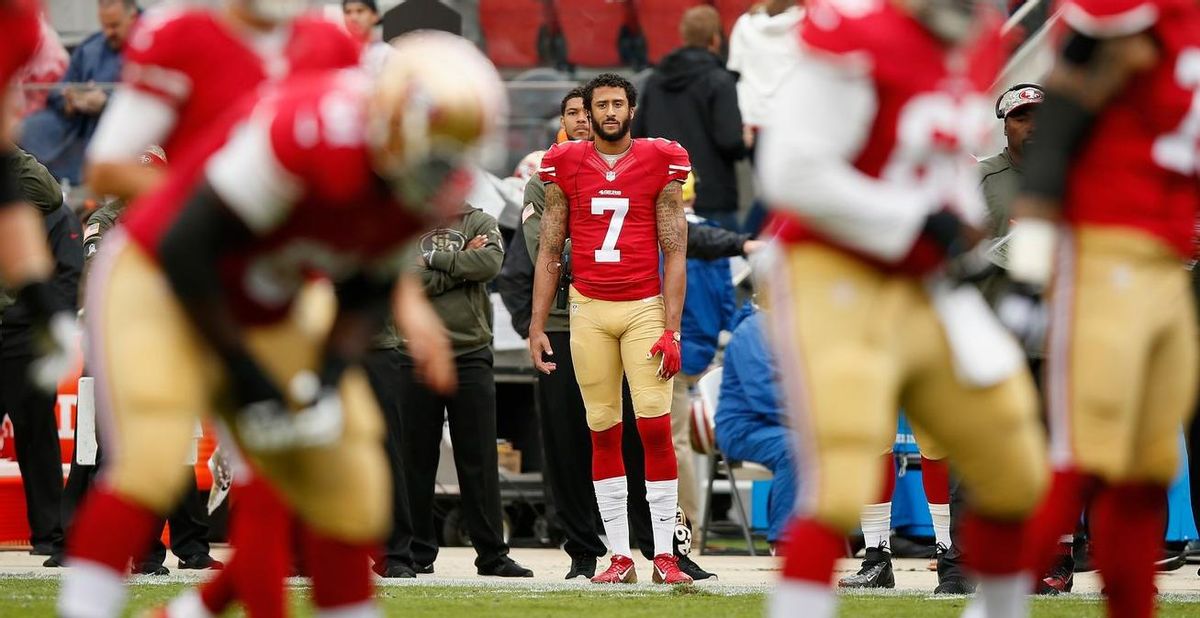 On 26 August 2016, San Francisco 49ers quarterback Colin Kaepernick (#7) was spotted sitting on the sidelines while the rest of his teammates stood during the playing of the U.S. national anthem prior to the start of an exhibition game against the Green Bay Packers:

After the game, Kaepernick offered the rationale after the game that his actions were intended to express his refusal to honor the flag of a country that "oppresses black people":

I am not going to stand up to show pride in a flag for a country that oppresses black people and people of color. To me, it’s bigger than football, and it would be selfish on my part to look the other way. There are bodies in the street, and people getting paid leave and getting away with murder.

This is not something that I am going to run by anybody. I am not looking for approval. I have to stand up for people that are oppressed. ... If they take football away, my endorsements from me, I know that I stood up for what is right.

While Kaepernick's comments were widely covered by major news outlets after that particular game, according to NBC Sports the 49ers QB hadn't stood during the playing of the national anthem during any of the team's three pre-season games, but this was the first time he did so while wearing a uniform bearing his name and number that made him easily identifiiable.

NFL rules do not mandate that players and other team personnel stand during the playing of the national anthem, stating only that they are "encouraged but not required" to do so.

The San Francisco 49ers also released a statement explaining that the quarterback had the right to take part, or not, in the pre-game ceremonies:

The national anthem is and always will be a special part of the pre-game ceremony. It is an opportunity to honor our country and reflect on the great liberties we are afforded as its citizens. In respecting such American principles as freedom of religion and freedom of expression, we recognize the right of an individual to choose and participate, or not, in our celebration of the national anthem.

Kaepernick had previously been fined by the NFL for allegedly using a racial slur when he and Bears defensive end Lamarr Houston exchanged words after Kaepernick gave up a fourth quarter interception during a September 2014 loss to Chicago.