The University of Chicago sent a letter to incoming students deriding an academic culture purportedly laden with "trigger warnings" and "safe spaces." 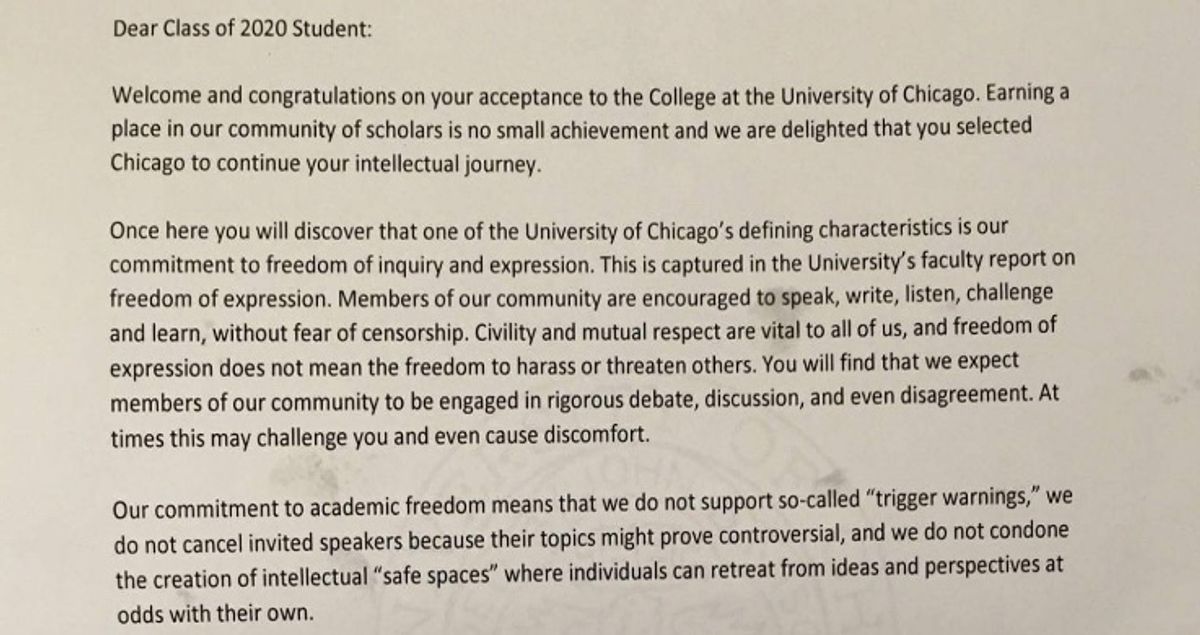 Incoming University of Chicago students recently received a headline-making letter from the institution, in which the school took a firm stance against "trigger warnings," "safe spaces," and other classroom functions believed by some to create a more inclusive campus culture (and others to be a symptom of an overly sensitized younger generation).

Dean of Students John Ellison addressed the undated letter broadly to each "Class of 2020 Student," stating after a brief introductory paragraph that:

Once here you will discover that one of the University of Chicago’s defining characteristics is our commitment to freedom of inquiry and expression ... Members of our community are encouraged to speak, write, listen, challenge, and learn, without fear of censorship. Civility and mutual respect are vital to all of us, and freedom of expression does not mean the freedom to harass or threaten others. You will find that we expect members of our community to be engaged in rigorous debate, discussion, and even disagreement. At times this may challenge you and even cause discomfort.

Our commitment to academic freedom means that we do not support so called ‘trigger warnings,’ we do not cancel invited speakers because their topics might prove controversial, and we do not condone the creation of intellectual ‘safe spaces’ where individuals can retreat from ideas and perspectives at odds with their own.

The letter linked to a University of Chicago web site devoted to the concept of free expression, primarily comprising a 2014 report on the school's commitment to such. Predictably, the missive generated multiple social media and media opinions about its content, concepts, and whether the underlying dispute to hand was one that was meritorious in the first place. One of the most common critiques levied on Twitter opined that the letter in tself constituted an example of the trigger warning phenomenon it decried:

@hi_im_shan Giving someone a heads about that kind of stuff is literally a content/trigger warning, which he said they're not going to give.

Other commenters posited that the stated ban on trigger warnings constituted the same type of limitation on free expression lamented in the letter:

One Facebook post about the letter asserted knowledge of a Chicago professor who had used a trigger warning, but another comment pointed out that this would have been the professor's decision to make, under principles of academic freedom.

Intellectual Takeout examined whether trigger warnings were as endemic as they were rumored to be in academic circles and provided an example of the use of a "safe space" for individuals wishing to avoid a potentially distressing event involving a debate over sexual assault:

Academics around the country are embracing the relatively new trend of using trigger warnings to shield students from ideas that might be discomforting or trauma-inducing. These ideas often include topics that touch on “racism, classism, sexism, heterosexism, cissexism, ableism, and other issues of privilege and oppression."

Though there is some debate surrounding how widespread the use of trigger warnings actually is, a survey conducted last year by the National Coalition Against Censorship found that a majority of educators had used trigger warnings at one time or another.

Similarly, many universities are creating “safe spaces” where students can relax free from ideas that might be stressful or anxiety-inducing. Among these is Brown University, which last year created a room “with cookies, coloring books, bubbles, Play-Doh, calming music, pillows, blankets and a video of frolicking puppies” because a debate on sexual assault was taking place on campus.

While that example might have highlighted the descriptive aspects of a single safe space more than its operative purpose (i.e., allowing victims to circumvent exposure to traumatic discussion), it also touched on the oft-asked question of whether campuses truly created environments on which students were forced to walk on eggshells for fear of offending classmates simply by participating in academic endeavors.

The overall belief that trigger warnings are exceptionally common, disruptive, and overly politically correct was probed in a December 2015 Huffington Post article based on a nonscientific survey of hundreds of working professors on college campuses conducted by the National Coalition Against Censorship (NCAC). The article surmised that trigger warnings are primarily a facet of Internet culture and are not nearly as prevalent in classrooms as is widely assumed:

Trigger warnings advise readers that the content ahead addresses sensitive subjects, such as child abuse, rape and racist violence, that may evoke personal trauma. The warnings, which became popular on blogs over the past decade, are typically placed at the beginning of reading material or stated verbally. A debate has emerged in recent years about their use in the university setting.

The Atlantic has written repeatedly about the “spread” of demands for trigger warnings. Jill Filipovic at The Guardian has said “we’ve gone too far“ with trigger warnings, essentially echoing Peggy Noonan’s critiques in The Wall Street Journal. Even WikiLeaks has attacked them. The American Association of University Professors issued a statement condemning trigger warnings as a “threat to academic freedom.”

Yet, as the NCAC [National Coalition Against Censorship] survey shows, the fears stoked by some in the media have gone well beyond the on-campus reality.

The Huffington Post first reported the statistics from the survey, showing that virtually no college required the use of trigger warnings. The full release of the results included testimony from some of the 800-plus current teaching professors who were surveyed. The project was conducted with help from the Modern Language Association and the College Art Association ... The NCAC said there is a media narrative that trigger warnings are being demanded by “coddled” liberal students. But the survey found that actual requests for warnings come from across the political spectrum.

That article referenced an anti-trigger warning piece published by The Atlantic, which asserted that trigger warnings sought to "scrub campuses clean of words, ideas, and subjects that might cause discomfort or give offense" (rather than just identify potentially alarming content) and described such efforts as "vindictive protectiveness" throughout the piece. Everything from general playground safety improvement to federal anti-harassment protections was pegged as a possible precursor to a purported campus culture in which few are free to truly express opinions without fear:

Trigger warnings are alerts that professors are expected to issue if something in a course might cause a strong emotional response. For example, some students have called for warnings that Chinua Achebe’s Things Fall Apart describes racial violence and that F. Scott Fitzgerald’s The Great Gatsby portrays misogyny and physical abuse, so that students who have been previously victimized by racism or domestic violence can choose to avoid these works, which they believe might “trigger” a recurrence of past trauma.

The ultimate aim, it seems, is to turn campuses into “safe spaces” where young adults are shielded from words and ideas that make some uncomfortable. And more than the last, this movement seeks to punish anyone who interferes with that aim, even accidentally. You might call this impulse vindictive protectiveness. It is creating a culture in which everyone must think twice before speaking up, lest they face charges of insensitivity, aggression, or worse.

While the University of Chicago's trigger warning letter unsurprisingly garnered both media and social media attention, frequently embellished debates over "political correctness" popped up on a near weekly basis before that particular lap on the outrage circuit. Tales of legions of offended individuals were rife on the internet, and almost universally misconstrued completely in their reporting. Popular puffed up controversies of the sort included purported college students "triggered" by chalk, sombreros, non-existent white students' unions, and white people in general; oversensitive schools or parents banning Yosemite Sam, American flags, everything, Captain America and Wonder Woman, racist brownies or peanut butter sandwiches, and frequently Halloween festivities; people of color or Muslims demanding bans on bathing suits, football jerseys, pork in secular spaces, the burials of grandparents, church pews, and other people's religious jewelry; and perpetually vented belief in a war on Christmas, Christianity, red Starbucks cups, holiday mall santas, and football songs with Christian overtones. One exceptionally self-satirizing instance exemplified the hypocritical nature of fake ban rumors, when social media users got bent out of shape over fabricated claims of a "Christian content" warning appended to A Charlie Brown Christmas.