In a campaign speech in Ft. Lauderdale, Florida, Donald Trump called President Obama the 'founder of Isis' and Hillary Clinton the group's 'co-founder.' 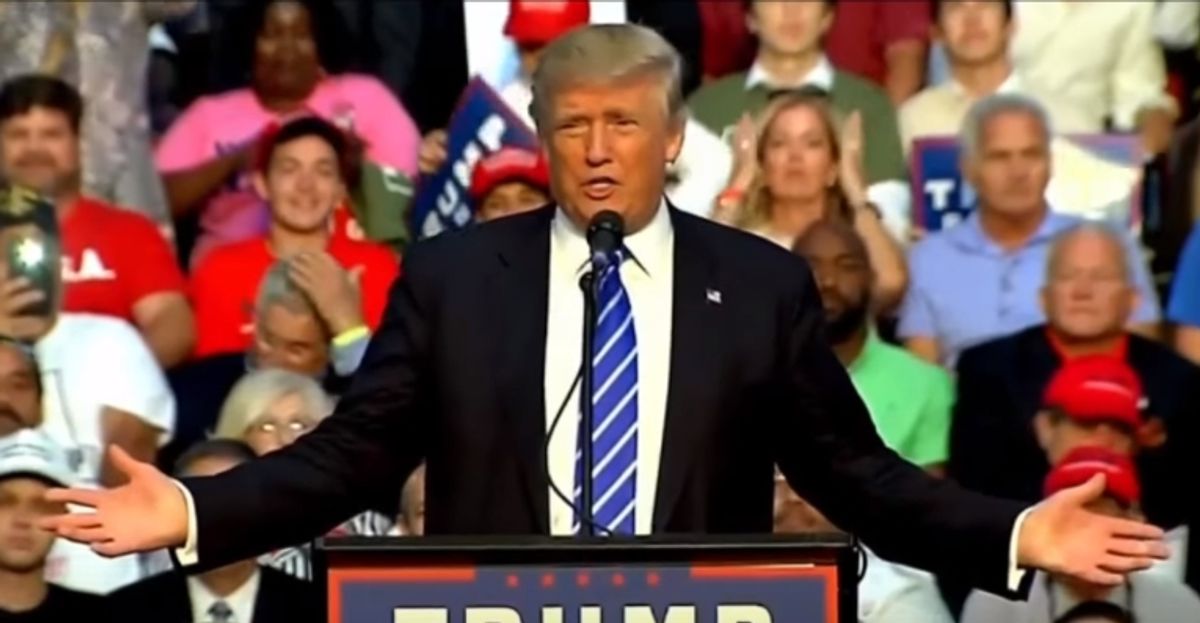 GOP presidential nominee Donald Trump delivered a campaign speech in Ft. Lauderdale, Florida in which he called President Obama the "founder of ISIS."

He made the statement after reiterating the claim that he, Trump, had opposed the war in Iraq, calling it a "terrible mistake" and saying it had destabilized and "unleashed fury" in the Middle East:

And then Obama came in, and normally you want to clean up. He made a bigger mess out of it. He made such a mess. And then you had Hillary with Libya, so sad. In fact, in many respects, you know they honor President Obama. ISIS is honoring President Obama. He is the founder of ISIS. He is the founder of ISIS. He’s the founder. He founded ISIS.  And I would say the co-founder would be crooked Hillary Clinton. Co-founder. Crooked Hillary Clinton.

To be clear, even though Trump has flirted in the past with conspiracy theories about Obama's supposed allegiance to Islam, he was not literally in this instance claiming that Obama and Clinton were founding members of the radical Islamist group (despite his insistence to the contrary in a radio interview the following day). The context shows he meant it metaphorically, his intent being to lay all the blame for the "fury" unleashed in the Middle East and the rise of ISIS after the Iraq War on the actions or inactions of the Democratic incumbent and presidential nominee (while not mentioning that the war was started during the administration of President George W. Bush).

All too many of Trump's followers seem willing to believe that President Obama's true allegiance lies with radical Islam, however. “In the mind of the average American, there is no doubt he is a Muslim," Trump campaign official Carl Paladino claimed during an interview. "He is not a Christian.”

Whether or not Trump himself believes Obama is a covert Islamist is unclear, but he has proved himself willing on more than one occasion to fan the flames of suspicion, as he did by referring to the president as the "founder of ISIS" and pointedly calling him by his full name, Barack Hussein Obama.

Update: After two days of insisting he was serious and literally meant that Barack Obama founded ISIS, Donald Trump tweeted on 12 August 2016 that he was only being sarcastic:

Ratings challenged @CNN reports so seriously that I call President Obama (and Clinton) "the founder" of ISIS, & MVP. THEY DON'T GET SARCASM?

Update: Hours after tweeting that his claim about President Obama founding ISIS was "sarcasm," Trump said during a rally in Erie, Pennsylvania, "So I said, the founder of ISIS. Obviously I’m being sarcastic. Then, then — but not that sarcastic, to be honest with you. "