In August 2016, Iranian state-run media reported that Shahram Amiri was hanged, and Sen. Tom Cotton claimed in an interview that the nuclear scientist was mentioned in Hillary Clinton's published e-mails. 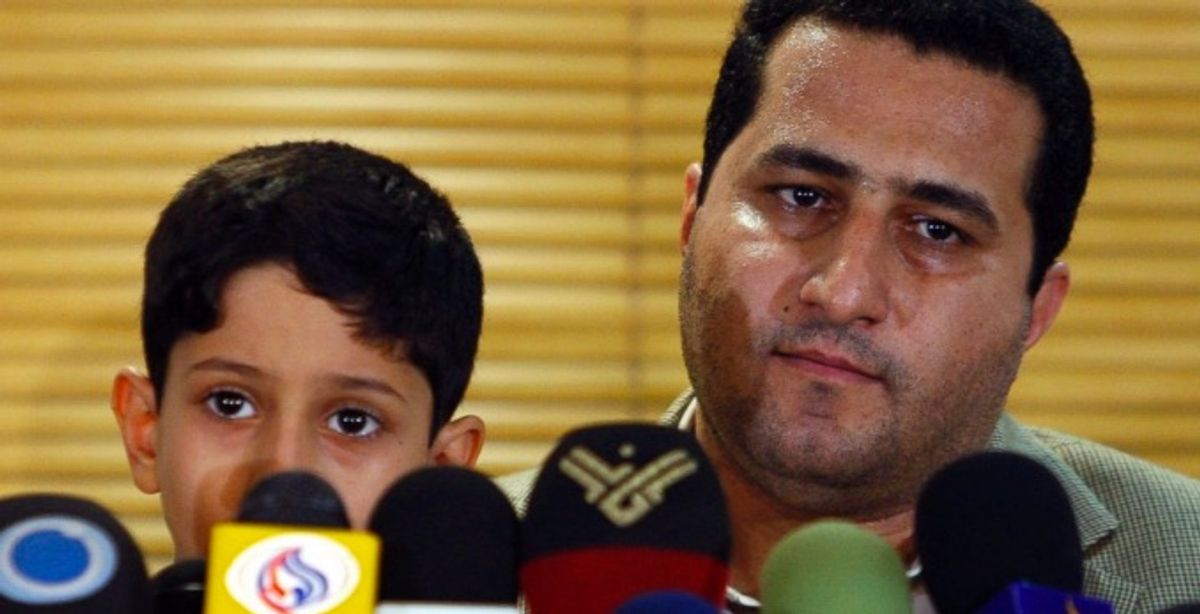 On 7 August 2016, the New York Times was among several news sources reporting that Iranian nuclear scientist Shahram Amiri was executed after having emerged in the United States under unclear circumstances and then returned to Iran:

When Shahram Amiri emerged from the shadows into the spotlight six years ago, he was a young Iranian scientist who suddenly appeared on YouTube from a safe house, telling a bizarre story of having been kidnapped by the Central Intelligence Agency.

Then, in another video that quickly followed, his story changed: He had come to the United States voluntarily to study, but desperately missed his son back in Tehran ... Soon, father and son were reunited in Iran, in a joyous scene broadcast by the Iranian government.

Then Mr. Amiri disappeared, amid rumors that he had been imprisoned. Questions, of course, went unanswered: Was he a spy, recruited by the United States for his insider knowledge of the Iranian nuclear program? Or a double agent, sent by Tehran to spread disinformation, or to learn what the Americans knew?

On [7 August] the case took what appears to be its final turn.

“Shahram Amiri was hanged for revealing the country’s top secrets to the enemy,” Gholam Hossein Mohseni Ejei, a spokesman for Iran’s Justice Ministry, told reporters in Tehran, according to international news services and the country’s state news agency. Those stories confirmed initial reports that quoted his mother saying she had seen his body.

Amiri first vanished in 2009 while on a religious pilgrimage to Muslim holy sites in Saudi Arabia. A year later, he reappeared in a series of contradictory online videos filmed in the U.S. He then walked into the Iranian-interests section at the Pakistani Embassy in Washington and demanded to be sent home.

In interviews, he described being kidnapped and held against his will by Saudi and American spies. U.S. officials said he was to receive millions of dollars for his help in understanding Iran's nuclear program.

Iranian judiciary spokesman Gholamhosein Mohseni Ejehi said Amiri "had access to the country's secret and classified information" and "had been linked to our hostile and No. 1 enemy, America, the Great Satan."

Amiri's execution was a final twist in a long-covered story about which New York Magazine plausibly filled in trajectory gaps, positing that Amiri's return to Iran was made under extreme duress:

The New York Times’ David Sanger, who has reported extensively on Amiri’s story over the years, tries to construct a final picture of what happened to this “unlikely spy,” noting that he appears to have begun passing along intelligence for the U.S. while he was still in Iran, and was of particular interest to the CIA because, as a specialist in measuring radiation, he had been to many of Iran’s sensitive nuclear sites:

By 2009, the C.I.A. had apparently decided that the chances he would be detected were rising, and offered to get him out of the country. The agency promised him $5 million and a new identity. Mr. Amiri believed his estranged wife would never leave Iran, and he decided to go alone, without his son.

After he was interviewed in Washington, he ended up near Tucson, under the agency’s national resettlement program, which provides cover and protection for cooperative foreign spies. But he immediately missed his young son, and began calling home. Iranian intelligence agencies pressured his family, and by one account threatened to harm his son.

Indeed, threatening family members who are still inside Iran is a tactic regularly used by elements of the Iranian regime when they want to intimidate Iranians living abroad. Sanger also reports that the first online video Amiri made was done at the request of the Iranian intelligence agents. The second video, in which Amiri declares he is free and pursuing a graduate degree, was produced by the CIA. And that video was a lie too, as Sanger notes that “behind the scenes, Mr. Amiri was telling his handlers that he had made a mistake by defecting, and only wanted to return to see his son.”

On 7 August 2016, Arkansas Sen. Tom Cotton addressed the reported execution of Amiri on the "Face the Nation" political affairs television program. Cotton alluded to what was possibly classified background information and stated that Amiri's potential ties to the United States were laid bare in e-mails sent and received by Hillary Clinton during her tenure as Secretary of State:

And Iran announced today that they executed a scientist who they believe helped the United States reveal news about its nuclear program.

Let me ask you about Donald Trump as president. Have you gotten more or less confident in his job and ability to handle the commander in chief position since you have endorsed him?

Cotton declined to discuss campaign events but said of Amiri's purported ties to the United States that:

I'm not going to follow the back and forth on the campaign trail. What is ultimately going to matter in the long term is not who won or lost a week in the campaign, but whether the American people are safe. You mentioned the Iranian scientist that was recently executed. Of course, I'm not going to comment on what he may or may not have done for the United States government.

But in the e-mails that were on Hillary Clinton's private server, there were conversations among her senior advisers about this gentleman. That goes to show just how reckless and careless her decision was to put that kind of highly classified information a private server. I think her judgment is not suited to keep this country safe.

It appeared Cotton had implied that his knowledge of Amiri's involvement with the United States outstripped what had been reported in the news media and referenced e-mails sent or received by State Department officials, including Hillary Clinton, in which the scientist's plight was purportedly discussed. (Amiri's name appeared in an e-mail with a preface that referenced an individual identified only as "S" who would be "talk[ing] to the Sultan this morning.")

One leaked e-mail transmission eyed by the news media was sent to Clinton staffer Jake Sullivan by State Department envoy Richard Morningstar and forwarded to Clinton in July 2010. That e-mail referenced a "subject" who needed a "way out," suggesting the situation in hand be "[framed] terms of a misunderstanding with no malevolent intent." Many readers have inferred (but not confirmed) that the subject of that communication was Amiri:

Per the subject we discussed, we have a diplomatic, "psychological" issue, not a legal issue. Our friend has to be given a way out. We should recognize his concerns and frame it in terms of a misunderstanding with no malevolent intent and that we will make sure there is no recurrence. Our person won't be able to do anything anyway. If he has to leave so be it.

Less than a week later, Sullivan e-mailed Clinton and said:

The gentleman you have talked to Bill Burns about has apparently gone to his country's interests section because he is unhappy with how much time it has taken to facilitate his departure. This could lead to problematic news stories in the next 24 hours. Will keep you posted.

Amiri thus arranged to go home, but in another twist, when he arrived in Tehran, he was given a hero’s welcome at the airport, greeted by his family and flowers and subsequently celebrated as a kind of double agent, appearing on television to explain how he was drugged, captured, interrogated, and psychologically tortured by Saudi, American, and Israeli agents, plus how he turned down an enormous sum of money he’d been offered to remain in the U.S. There was even talk of a movie being made about his escape.

However, whether he realized it was happening or not, Amiri was also now a political pawn for two world powers ... If Amiri’s sentence was changed, one contributing factor could be that he was mentioned in emails released last year by the State Department as a result of the investigation into Hillary Clinton’s use of a private email server while she was secretary of State.

One Iran scholar who spoke with The Guardian, Dina Esfandiary, believes that Amiri’s name coming up in the emails probably led to the change in his situation. “In the Iranian judiciary’s mind, it’s a necessary signal to the U.S. that Iran is aware of their activities in Iran and that this is what is done to those who help the enemy,” she said, adding that, “It’s a textbook spying case.”

Foreign policy analysts and Sen. Cotton speculated that references to Amiri in Clinton's published e-mails led to "[a] change in his situation," from a ten-year prison sentence to death. But the New York Times noted that American intelligence officials had expected such would be Amiri's fate the moment he chose to return to Iran:

Weeks after Mr. Amiri returned to Iran, American intelligence officials described the events on conditions of anonymity to a small group of reporters. Their story was that Mr. Amiri had been a voluntary recruit, interviewed and then placed in the agency’s equivalent of a witness protection program. When he first told his C.I.A. handlers that he planned to return, they warned him, according to the intelligence agency’s account, that it would probably end with his head in a noose.

The timing of Amiri's death might have led to conflation between earlier leaked State Department e-mails and the DNC Leaks of July 2016, but the messages referencing Amiri were published by Wikileaks in March 2016.