Michael Phelps Wasn't Forced Out of Flag-Bearer Role in Rio

Two op-eds suggested Michael Phelps step aside as U.S. Olympic team flag-bearer for fencer Ibtihaj Muhammad, but no one demanded he do so "because he's white." 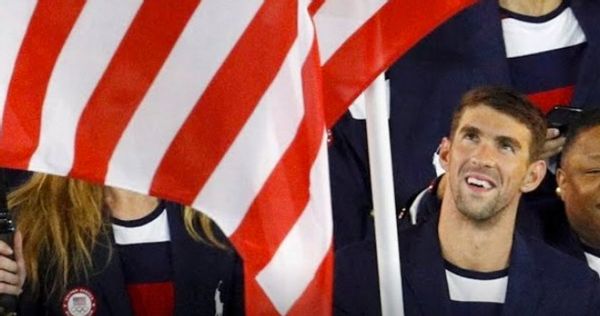 On 2 August 2016 TIME magazine published an editorial titled "Team USA Should Pick Ibtihaj Muhammad as Flagbearer in Rio," opining that the Muslim-American fencer should be tabbed as the flag-bearer for the U.S. team during the opening ceremonies of the 2016 Summer Olympic Games over swimmer Michael Phelps, the most decorated Olympian of all time:

When the Rio Olympics kick off Aug. 5, Team USA should choose a flag bearer that offers a rebuttal to the storms brewing beyond the Olympic Village, not merely an escape. For that, the U.S. should pick Ibtihaj Muhammad, a Muslim-American fencer who will be the first American Olympian to compete in a hijab.

Muhammad represents the best of the nation. The daughter of a teacher and a police officer raised in Maplewood, N.J., she took up fencing in the eighth grade, in part because the body-length uniform accommodated her Muslim beliefs. She became an All-American in the sport at Duke, where she graduated with degrees in International Relations and African and African-American studies ... Nor is Muhammad afraid to speak out in defense of her beliefs. After Trump called for a temporary ban on Muslims entering the U.S. late last year, Muhammad told TIME: “When you incite hateful speech and rhetoric like that, the people who say it never think about the repercussions and how that affects Muslims. Specifically Muslim women who wear their religion every single day. So then you start to think, Am I going to be safe?”

Like many of her American teammates, Muhammad is an inspiration to countless people. But choosing her as a flag bearer is a chance to signal something even greater about what America stands for. It would be a win for all Americans — and Team USA’s first of the 2016 Olympic Games.

.@MichaelPhelps is HONORED to be #TeamUSA's flag bearer in the #Rio2016 Opening Ceremony ?❗️

On 4 August 2016 CNN published an editorial by W. Kamau Bell noting that gold medalist Michael Phelps had been chosen for the honor. The article was prefaced with a note that "opinions expressed in this commentary are [Bell's] own," and it called upon Phelps to cede the honor of carrying the U.S. flag to Ibtihaj Muhammad:

Thank you! I really appreciate the fact that you have made — or will make — the right choice here. You haven't announced it yet, but I'm sure you will soon.

Obviously, I am talking about what I hope will be your decision to decline the position as flag bearer in opening ceremonies of the Olympics in Rio De Janeiro. While you haven't said this yet, I'm sure this is what you are going to do, because you are not only an Olympic hero, you are — by medal count — the Olympic hero. And yes, being asked to carry the flag is a big deal. I'm betting that even a star of your magnitude is still feeling the glow of being voted to carry the flag by your Olympic peers. But I know that you must know that there is a better choice to carry the flag — the athlete who came in second to you in the vote for flag bearer, fencer Ibtihaj Muhammad.

It shouldn't be a big deal for you to give up your spot. For one thing, according to the Los Angeles Times, the vote was close. So Muhammad must have lots of fans among the athletes. And also, let's be real here, Michael. It's not like you need the honor.

On 5 August 2016, Phelps led Team USA into Rio's Maracana Stadium as America's flag-bearer, and the following day multiple web sites published polemics about the obsolete suggestion (many attributing it to CNN, not Bell) that Phelps cede the honor:

Michael Phelps was chosen by his teammates to be the flag bearer during the Opening Ceremony. Rightly so. He deserves it. He has what? 22 medals? But his accomplishments be damned. No matter how talented he is or how many medals he holds, at the end of the day, he’s still a white guy. That’s why liberals urged him to give up his position as flag bearer and hand it over to Ibtihaj Muhammad, a black Muslim woman who’s famous for wearing a hijab during fencing matches.

“It feels so right,” Olympic swimmer Missy Franklin said, according to Western Journalism, “to have the most decorated Olympian of all time being our flag bearer and leading us. And outside of the pool someone who has overcome so much internally and externally and shared that with everyone.”

But none of that matters to liberals who worship at the altar of political correctness and never overlook a chance to politicize ANYTHING.

Britain's Guardian published an editorial also offering that Ibtihaj Muhammed might have been a more worldly symbolic choice than Phelps, but the debate largely took place well after Phelps had already carried the flag during the Summer Olympics' opening ceremonies. It's true that a few news outlets published editorials written in advance entreating Michael Phelps to step aside and let Ibtihaj Muhammed carry the flag (and another appeared after the fact), but no one (as some suggested) attempted to "force" Phelps to cede his position, much less do so because he "is white."