An amazing video shows a young California girl who went swimming in a backyard pool with a massive Burmese python. 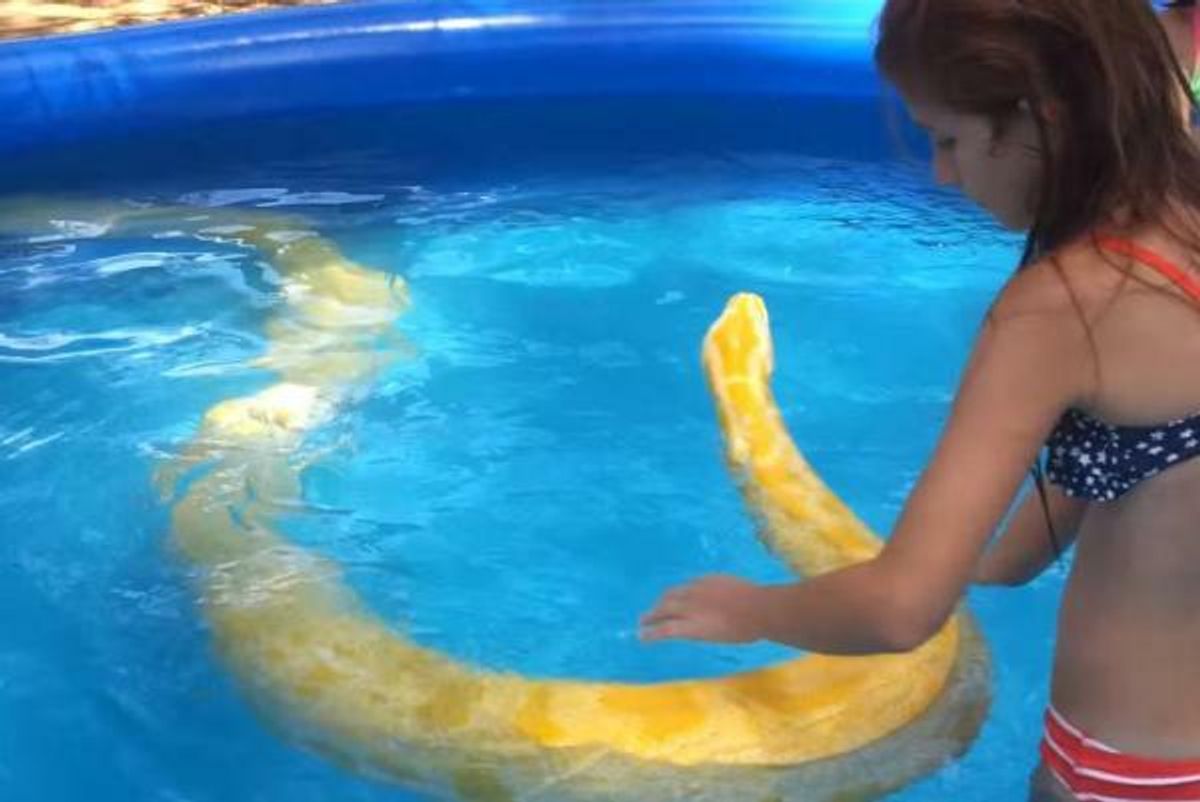 A California pet owner's video of his young daughter swimming with the family pet, a massive 8-year-old female albino Burmese python named Sumatra, has gone viral. The video was initially posted online in April 2014 but (for reasons unknown) receive a spate of publicity in July 2016.

Sumatra's owner noted in the comments section of his video that the snake is docile with children and doesn't bother animals (even potential prey), before lapsing into a discourse on the best way to dispatch small animals (presumably for use as snake food) and noting that Sumatra wouldn't eat live food — it had to be killed for her first:

This is our 8 yr. old Burmese Python named Sumatra. She has been to over 500 birthday parties and many schools, she has been around kids since she was a baby, she has never killed anything; she even likes our dogs and cat. Funny story, I have found the most humane way to kill a rabbit or chicken is to give them a strong hit to the back of the neck with a hard object; this normally kills them instantly, for I don't like to see any animal suffer. Anyway, I came in later to see if Sumatra had eaten, and the chicken was walking around her cage. She would not touch it unless it was dead, so I killed it for sure this time and she ate it right away.

Burmese pythons are constrictors and are not venomous. According to the United States Geological Survey (USGS), human fatalities from non-venomous snakes are "very rare":

Q: Are large constrictor snakes such as Burmese pythons able to kill people? What is the risk? Would this be in the wild too, or in backyards?

A: Human fatalities from non-venomous snakes are very rare, probably averaging one or two per year worldwide. All known constrictor-snake fatalities in the United States are from captive snakes; these are split between deaths of snake owners who were purposefully interacting with their pet and deaths of small children or infants in homes where a snake was kept captive as a pet. There have been no human deaths from wild-living Burmese pythons in Florida. Overall, the risk of attack is very low.

We cannot categorically rule out the possibility of a fatal attack. In suburban areas and parks in Florida that contain ponds, canals or other bodies of water where large snakes could feel at home, the situation is likely similar to that experienced with alligators: attacks are improbable but possible in any locality where the animals are present and people are also present. The simplest and most sure-fire way to reduce the risk of human fatalities is to avoid interacting with a large constrictor.