Two Twitter accounts purportedly linked with the LGBT community in Phoenix endorsed Donald Trump, but they appeared after the Orlando shooting and were likely fake. 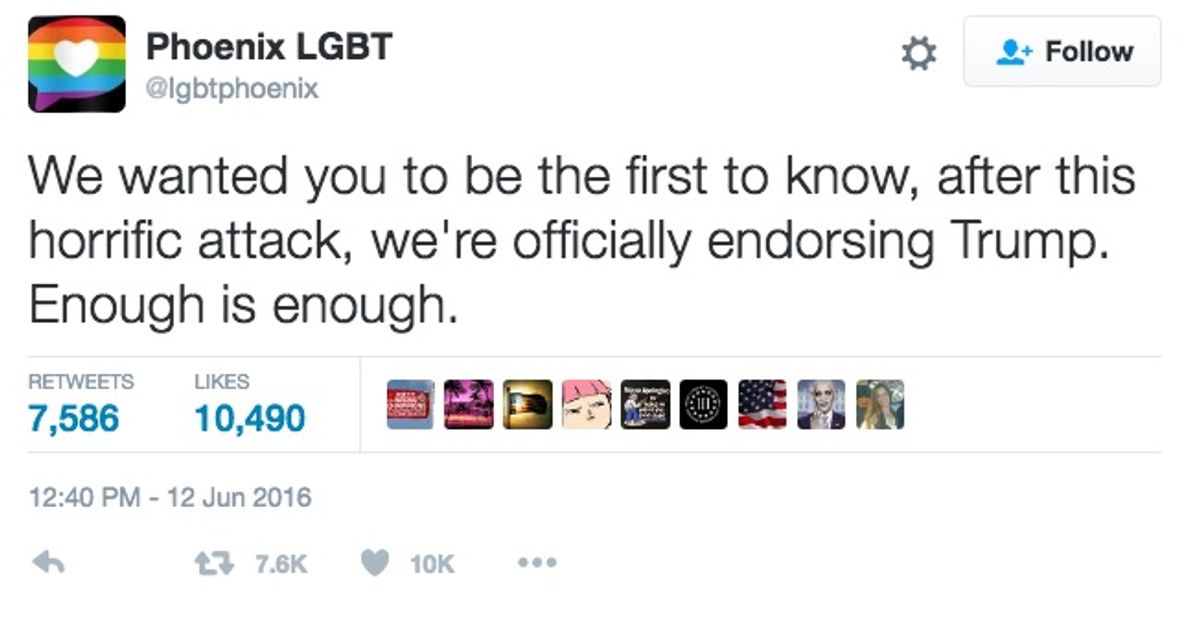 On 12 June 2016 a mass shooting at an Orlando gay nightclub on Latin night led to national outrage and comment from many high-profile figures, including controversial remarks tweeted by Republican presidential candidate Donald Trump.

The tragedy encompassed a number of demographics and social issues, including the LGBT (lesbian, gay, bisexual and transgender), Latino, and Muslim communities. Groups representing all of those larger entities passed comment on the attack, and among the purported LGBT commentary was a tweet attributed to an unspecified LGBT group in Phoenix supposedly offering an endorsement of Donald Trump's candidacy:

As some viewers immediately noticed, the screen name of the Twitter account used an atypical "LBGT" abbreviation rather than the common version "LGBT." Others noted that a possible different iteration used a lowercase "i", capitalized to appear visually identical to a lowercase "l":

The tweet in question sent by that account rendered as if it were "LBGT Phoenix" and not "IGBT Phoenix" due to Twitter's lack of case sensitivity in handles: Of note was the fact that both accounts' viral tweets appeared to be the first tweets ever sent by either account, as neither had tweeted prior to the Orlando nightclub tragedy nor evinced a Twitter presence before 12 June 2016. Moreover, subsequent tweets sent by those accounts primarily endorsed Donald Trump or criticized Hillary Clinton and scarcely discussed the tragedy's impact on all gay communities.

The tweet[s] got a visibility boost and air of authenticity when one was shared by actor Scott Baio, whose account is verified: I don't know if @lbgtPhoenix is legit, however, ANY ONE that stops supporting @HillaryClinton 2support @realDonaldTrump will get mad props!

On social platforms such as Quora, the tweets were immediately dismissed as fakes due to the age of the accounts and the spelling anomalies:

This is one of the most vile things I’ve seen. In the immediate hours after the worst mass shooting in American history at an LGBT club, an account is created that is purposefully meant to imitate an LGBT organization by using “Igbt” where the “I” is meant to spoof a lower case “l”. The first tweet this account makes is to make a political endorsement, purposefully meant to imitate a legitimate organization. The mindset of these depraved individuals was rather than mourn the individuals lost in the attack, it was to purposefully deceive individuals. It really shows the shame is no longer part of some people’s vocabulary. As to whether Trump should renounce it, the answer is “yes”. It’s completely clear that he won’t. He’d be more likely to congratulate on choosing him.

LGBT blogger Joe. My. God. addressed the brewing controversy, noting that the tweet was covered by the unreliable Gateway Pundit web site:

This afternoon [blogger Jim] Hoft gleefully reported the “breaking” news that a group called Phoenix LGBT has endorsed Donald Trump. As evidence of this endorsement Hoft posted a message from a Twitter account that was created yesterday. Not only that, the account’s profile oddly links to the Manchester, UK-based LGBT Foundation. The tweet below has been shared nearly 7000 times since Hoft’s posting.

The Gateway Pundit later updated their post to note that the accounts were created the day of the shooting but didn't acknowledge it was unlikely they were affiliated with any LGBT groups or people. Phoenix Pride, a legitimate organization with a Twitter presence dating to May 2009, disavowed the tweets in response to confusion from fellow users:

That organization noted the only legitimate accounts representing the LGBT community in that city:

It remained unclear who was behind the pro-Trump tweets masquerading as LGBT (not LBGT) groups, but both accounts from which they issued were created after the Orlando shooting and contained no content relating to community issues in Phoenix prior to the shooting. An extant LGBT group in Phoenix has disavowed the tweets and confirmed that neither account was connected to the Phoenix LGBT community.