A Texas pastor falsely claimed that Whole Foods inscribed an anti-gay slur on his custom cake. 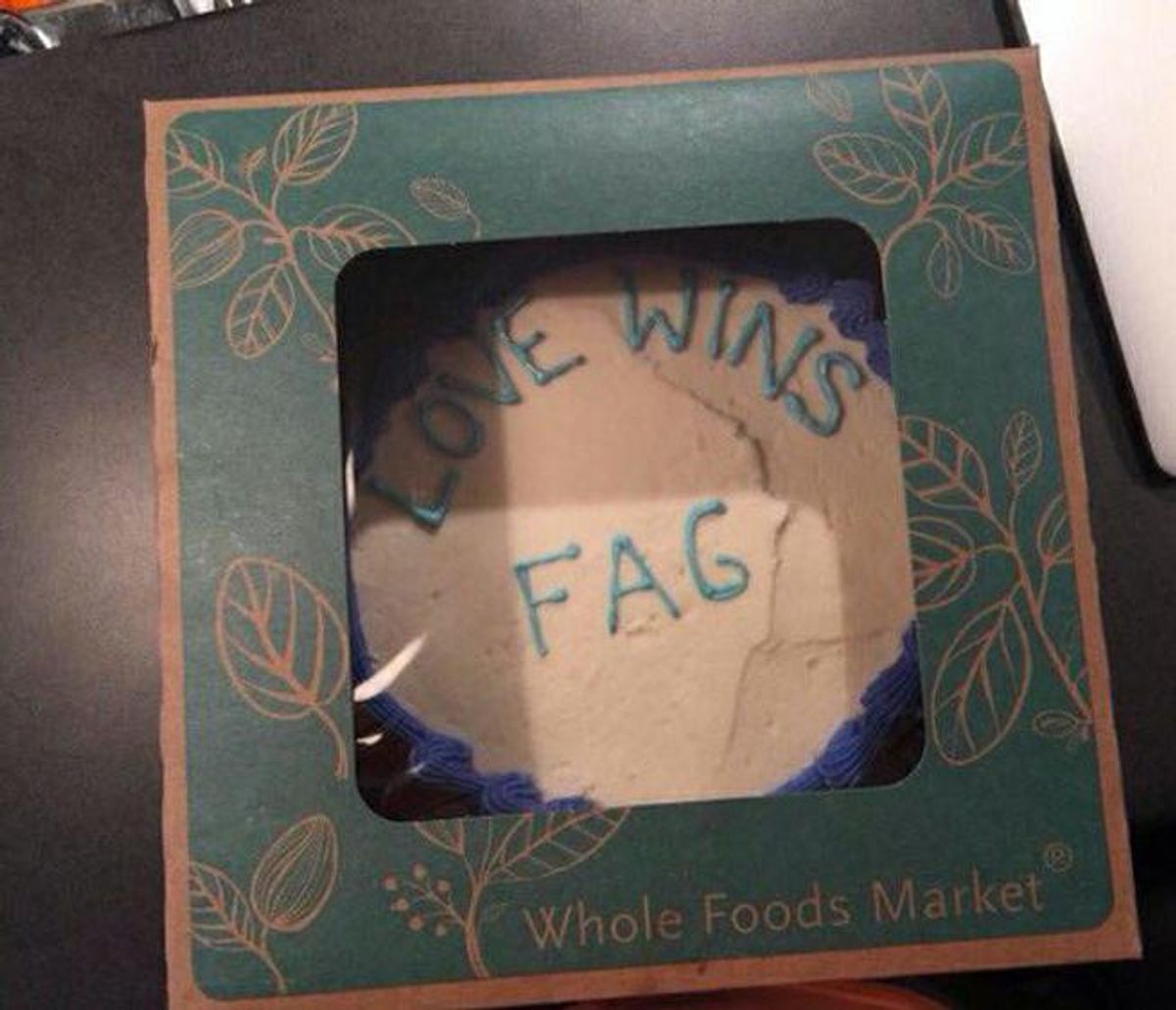 On 18 April 2016, Pastor Jordan Brown of the Church of Open Doors in Austin, Texas, tweeted an image of a Whole Foods Bakery purchase, claiming that the cake he had ordered to be inscribed with the phrase "LOVE WINS" instead bore the message "LOVE WINS FAG":

Roughly an hour after sharing the image of the offending cake, Brown stated that his church would be holding a press conference to publicize the issue and announce the initiation of a lawsuit against Whole Foods. Twitter responses from other users ranged from expressions of sympathy to expressions of skepticism about the cake inscription's authenticity. Many of the latter was based on the fact that icing used for the word "FAG" appeared to have a significantly thinner line than that of the "LOVE WINS" at the top of the cake, was oddly spaced from the other portion of the inscription, and didn't appear to be part of the overall cake design. In other words, it appeared that the offending word had been added later by someone else.

Not long after Brown posted the cake image on Twitter, Whole Foods released a statement denying that the epithet had been added by an employee:

The team member wrote “Love Wins” at the top of the cake as requested by the guest and that’s exactly how the cake was packaged and sold at the store. Our team members do not accept or design bakery orders that include language or images that are offensive. Whole Foods Market has a zero tolerance policy for discrimination.

The following day, Whole Foods released a stronger statement threatening legal action against Brown for spreading false and defamatory claims about them:

After a deeper investigation of Mr. Brown’s claim, we believe his accusations are fraudulent and we intend to take legal action against both Mr. Brown and his attorney. Here’s what we know:

Our bakery team member wrote “Love Wins” at the top of the cake, which was visible to Mr. Brown through the clear portion of the packaging. That’s exactly how the cake was packaged and sold at the store. Whole Foods Market has a strict policy that prohibits team members from accepting or designing bakery orders that include language or images that are offensive.

Mr. Brown admits that he was in sole possession and control of the cake until he posted his video, which showed the UPC label on the bottom and side of the box.

After reviewing our security footage of Mr. Brown, it’s clear that the UPC label was in fact on top of the cake box, not on the side of the package.  This is evident as the cashier scans the UPC code on top of the box, which you can view here.

We stand behind our bakery team member, who is part of the LGBTQ community, and we appreciate the team members and shoppers who recognize that this claim is completely false and directly contradicts Whole Foods Market’s inclusive culture, which celebrates diversity.

On 16 May 2016, Brown issued a statement announcing that he was dropping his lawsuit against Whole Foods and acknowledging that he had made the whole thing up:

Today I am dismissing my lawsuit against Whole Foods Market. The company did nothing wrong. I was wrong to pursue this matter and use the media to perpetuate this story. I want to apologize to Whole Foods and its team members for questioning the company’s commitment to its values, and especially the bakery associate who I understand was put in a terrible position because of my actions. I apologize to the LGBT community for diverting attention from real issues. I also want to apologize to my partner, my family, my church family, and my attorney.