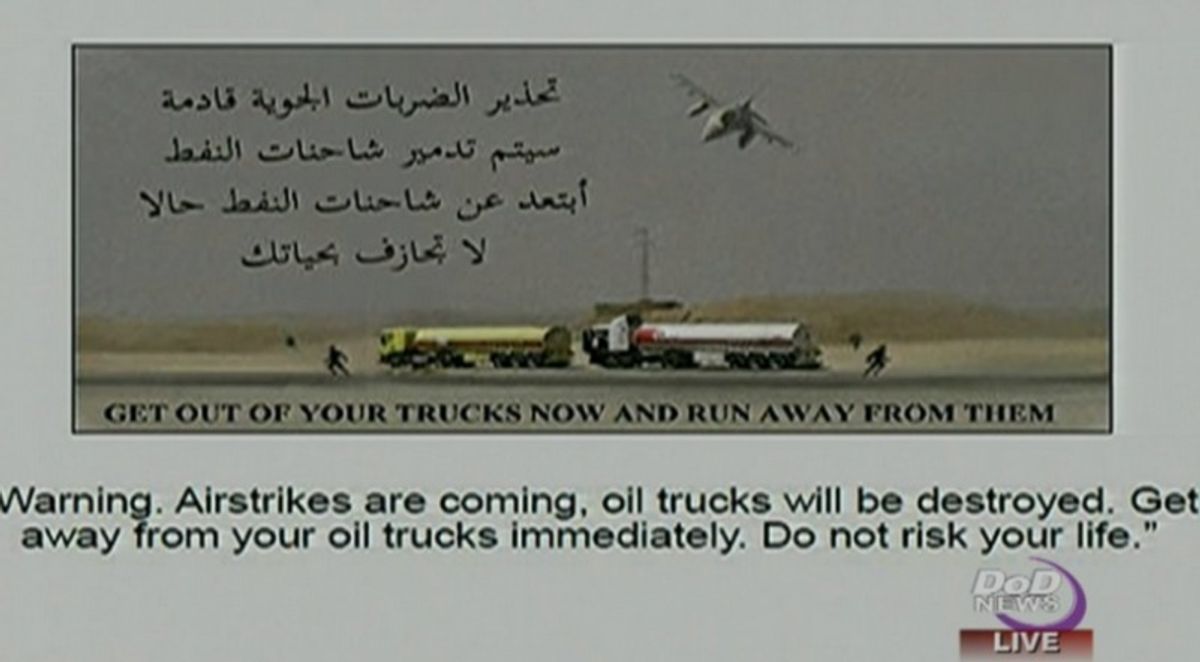 Several blogs linked to a 22 November 2015 article titled "OBAMA DROPPED LEAFLETS TO GIVE ISIS 45 MIN WARNING BEFORE BOMBING" published by the web site Frontpage Mag. Its content consisted primarily of material quoted from other sources, noting that:

So after all this time, they came up with a great plan; drop flyers on ISIS trucks so that the drivers, who may or may not be ISIS members, can run away in time. Meanwhile ISIS gets 45 minutes of warning. Now you know why we won't actually bomb ISIS' core forces. And so does ISIS. All it has to do is surround itself with civilians and it's invulnerable. Just like the Taliban did in Afghanistan.

The headline suggested that President Obama had specifically warned ISIS of looming airstrikes. The body of the article (outside its quoted material), however, focused on a more ambiguous assertion that ISIS operatives might learn about and heed warnings directed at civilians in order to evade being targeted, a possibility cited in an 18 November 2015 PJ Media article which described briefings made by spokesman for Combined Joint Task Force-Operation Inherent Resolve Col. Steve Warren:

Briefing via teleconference from Baghdad to the Pentagon, Col. Steve Warren told reporters that "France has conducted numerous strikes against targets in Raqqa" — the capital of the Islamic State.

"In Al-Bukamal, we destroyed 116 tanker trucks, which we believe will reduce ISIL's ability to transport its stolen oil products," Warren said. "This is our first strike against tanker trucks, and to minimize risks to civilians, we conducted a leaflet drop prior to the strike. We did a show of force, by — we had aircraft essentially buzz the trucks at low altitude."

The leaflets, which fluttered to the ground about 45 minutes before the strikes, simply said: "Get out of your trucks now, and run away from them. Warning: airstrikes are coming. Oil trucks will be destroyed. Get away from your oil trucks immediately. Do not risk your life."

He said the decision to drop warnings came after they "assessed that these trucks, while although they are being used for operations that support ISIL, the truck drivers, themselves, probably not members of ISIL; they're probably just civilians ... we had to figure out a way around that. We're not in this business to kill civilians, we're in this business to stop ISIL — to defeat ISIL."

Thus, they tried to come up with a strategy "to kind of shoo people away without harming them."

At some point between 18 and 22 November 2015, the Pentagon's effort to minimize civilian casualties in eastern Syria morphed from being reported as a practice of precision on the part of the military to an initiative undertaken by President Obama to aid ISIS militants in escaping danger. A 16 November 2015 New York Times item reported on both the bombings and the leaflet drops:

Intensifying pressure on the Islamic State, United States warplanes for the first time attacked hundreds of trucks that the extremist group has been using to smuggle the crude oil it has been producing in Syria, American officials said.

According to an initial assessment, 116 trucks were destroyed in the attack, which took place near Deir al-Zour, an area in eastern Syria that is controlled by the Islamic State. Plans for the strike were developed well before the terrorist attacks in and around Paris, officials familiar with the operation said, part of a broader operation to disrupt the ability of the Islamic State, also known as ISIS or ISIL, to generate revenue to support its military operations and govern its territory.

To reduce the risk of harming civilians, two F-15 warplanes dropped leaflets about an hour before the attack warning drivers to abandon their vehicles, and strafing runs were conducted to reinforce the message.

As the Times noted, plans for those strikes were well underway before the Paris attacks (indicating they weren't retaliatory in nature). Moreover, the article reported that the operation was meticulously planned with minimization of civilian casualties a primary focus, describing how the military went to lengths to achieve the objective of destroying the oil trucks cautiously:

Until Monday, the United States refrained from striking the fleet used to transport oil, believed to include more than 1,000 tanker trucks, because of concerns about causing civilian casualties. As a result, the Islamic State’s distribution system for exporting oil had remained largely intact.

On 19 November 2015, Military.com published an article that characterized the airstrikes as "more evidence of the pains taken by the U.S. in air tasking orders to avoid civilian casualties through precision weaponry and the use of intelligence assets in contrast to indiscriminate Russian airstrikes with 'dumb bombs[.]'" Extensive commentary from Col. Warren provided a more thorough picture of the Army's aim to carry out such strikes with precision:

However, Col. Warren said at the Pentagon briefing that communications between the U.S. military and Russia were minimal and he scoffed at the Russians' "antiquated tactics" that he said took no regard for civilian casualties.

"We don't have a great read on the civilian casualty piece" from the Russian airstrikes, Warren said, but "the Russians are using dumb bombs. Their history has been both reckless and irresponsible. The idea of putting, you know, ten ships in the air at one time, or 12 or even more, are very old fashioned," Warren said. "And those are the type of tactics needed only if you don't possess the technology, the skills and the capabilities to conduct the type of precision strikes that our coalition conducts."

So while it's true that the U.S. military dropped leaflets on 16 November 2015 warning "telling Syrian truck drivers to run for their lives" less than an hour before massive airstrikes were undertaken against ISIS forces, the operation didn't directly involve President Obama. Moreover, critical articles published more than a week after the strikes failed to account for extensive commentary made by Col. Warren about the operation and its focus on minimizing civilian casualties. No portion of extensive media coverage of those strikes remotely indicated that the leaflets were dropped aiding with ISIS in mind, and the maneuvers were not retaliatory in nature.